Beverly Stephen, the former executive editor of Food Arts, is an independent journalist and the co-owner of Flavor Forays, a culinary travel company.

Stephen joined Food Arts as senior editor in 1990 and in 1998 became executive editor. In addition, she developed programs, recruited speakers, and moderated panel discussions for leading industry conferences such as the Greystone Flavor Summit.

Following the closure of Food Arts, she and former publisher Barbara Mathias founded Flavor Forays to take food and beverage executives and corporate chefs of leading hotel and restaurant groups to culinary meccas such as Charleston, Portland, and Austin.   She was previously an editor, reporter, and columnist for the New York Daily News and the San Francisco Chronicle. 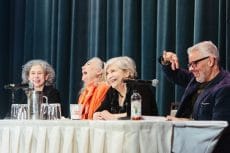 IACP, an IRL networking platform of professionals deeply engaged in an industry they love…