Chef Evan Hennessey, 43 years of age, lives in Dover, NH and together with his brother, owns Stages at One Washington restaurant in Dover. Chef Hennessey is an award winning chef that graduated from Le Cordon Bleu at the Atlantic Culinary Academy in 2001. He has since cooked alongside some of the best chef’s in the country including Chef Charlie Palmer at New York City’s Aureole , Chef Grant Achatz at Trio in Chicago, Andrew Carmellini at Cafe Boulud, Thomas Rice and Ken Oringer at Clio, and Eli Kaimeh and Thomas Keller at Per Se. Chef Hennessey has worked as the Executive Chef of 43 Degrees North, and The Dunaway Restaurant, as well as Chef de Partie of the 100 Club, all in Portsmouth, NH.

Chef Hennessey is trained in classical French techniques and methods and now serves what he calls Progressive New England Cuisine, utilizing locally farmed and foraged foods to create artistically inspired dishes. In January 2019, Hennessey was featured in edition #129 of the international publication “Art Culinaire”. In May of 2018, Hennessey won Food Network’s ‘Chopped’, then again in October 2018, he won the semi-final round of ‘Chopped Champions’. In 2018, he was named to NH Magazine’s “It List” (the most influential people in NH that year). In the fall of 2015, Hennessey was named as one of 30 ‘Chefs to Watch’ nationally by Plate Magazine. In the spring of 2014, Hennessey was named a semi-finalist for the James Beard Awards in the category of Best Chef Northeast. In October of 2013, Chef Hennessey traveled to New York City and won the StarChefs.com VitaMix Challenge, a national competition that included a field of several hundreds of chefs, honed down to 6 six finalists and completed at the International Chefs Congress in Manhattan. Chef Hennessey is also a 2014 StarChefs.com Rising Star Chef Winner for Coastal New England.

Stages at One Washington has gained such accolades as #1 Hottest New Restaurant in NH (NH Magazine), 15/20 score from Gayot.com (highest rating given in NH), the Award of Excellence from the Chaine des Rotisseurs for outstanding food & service, and named the #30th Best Restaurant in the North America by Opinionated About Dining Chef Hennessey is also very active in the local food industry, giving many demonstrations and talks at various local schools, farmer’s markets, and conferences. He is also a proud member of Chef’s Collaborative, a non-profit organization aimed and bringing farmers and chefs together in order to revive heirloom vegetables, heritage meats and dairy as well as spread the education of sustainable agriculture and food sourcing. He focuses on supporting local farms through use of their products in his cooking. He also participates in cooking events such as the Taste of the Nation, Passport Beer and Food Festival and the Heirloom Harvest Barn Dinner. 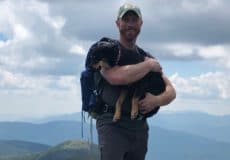 Chef Evan Hennessey shares his raw account of life behind the burner, and his personal quest for mental and physical health.