She began her career as a food journalist in the early days of the New Nordic Cuisine movement, then became a food critic.  Since 2007 she has been a freelance food writer and cookbook editor, working on the books of Danish luminaries such as Claus Meyer of Noma fame. In 2014 she made her author’s debut with the combined cookbook and essay collection ‘Foodie’ and in 2015 she wrote the cookbook ‘Quivering Desserts & Other Puddings’ which is available in English, Danish and German. 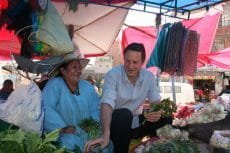