Mike Petrovitch is an NYC native - having grown up in the Lower East Side just blocks away from his new restaurant, Que Chevere. Mike hasn’t always been in the restaurant business, with his experience including serving in the U.S. Marine Corps, leading retail operations for a major sporting goods chain, and managing all Business Operations for a Wall Street firm. Mike has spent the last decade leading all Finance, Business & Operations for a major global record company. While always excelling at his day job, Mike also managed the concession stands at a major NY baseball stadium where he learned the in's and out's of fast food retail operations.

His inspiration to start a restaurant came from having a conversation with his daughter in which they were discussing the future of their family members, specifically those that are autistic. He had always wanted to open a unique restaurant - one that truly represents his family and his heritage - and thus, Que Chevere was born. Now he’s working to make his dreams come true but has a strong focus on giving back to the community - donating a portion of his profits to Autism Speaks.

Prior to the restaurant officially opening Que Chevere has been written up as one of the 21 Most Anticipated Restaurant Openings by Time Out and been called out by the New York Times. Further, it won the “Pig Impact- Making a Difference Through Food” Award at the 2019 Pig Island and “Overall Best Dish” at the Hester Street Fair. Mike looks forward to bringing Puerto Rican food back to the vibrant community of the Lower East Side and supporting the Autistic community. 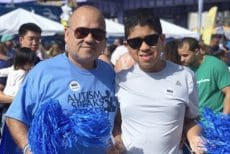 Que Chevere is opening at NYC’s highly anticipated Market Line, and more than bringing excellent food, this restaurant is bringing awareness of autism to the community