MIKE DeSIMONE and JEFF JENSSEN, also known as the World Wine Guys, are wine, spirits, food, and travel writers, educators, television presenters, and hosts.   They are award winning journalists as well as best selling and award winning authors. They have been featured guests on The TODAY Show, CNN, The Martha Stewart Show, Better TV, and the CBS, FOX, Hallmark, WGN, and NBC networks.

Mike and Jeff are the Entertaining and Lifestyle Editors at Wine Enthusiast Magazine, regular travel and wine contributors for The Huffington Post and twice monthly wine columnists for The Latin Kitchen, the on-line arm of Latina Magazine.   Their articles and photographs have appeared in Wine Enthusiast, Wine Spectator, Oxford University Press, TODAY, Huffington Post, The Latin Kitchen, MSNBC, Robb Report, and Saveur.  They have also been featured in Women’s Health, Associated Press, and Reuters.

Always engaging, informative, and entertaining, Mike and Jeff have taught at The Culinary Institute of America, DeGustibus Cooking School, The Astor Center, The Miele Experience Center, Sherry Lehmann, CorkBuzz, The Georgetown Club, SommCon, the residence of the Spanish Ambassador to the United States, and onboard Holland America and Seabourn Cruise Lines.

They have served as international judges for the Concours Mondial de Brussels, the Concours de Chablis as well as other US and international wine competitions. They are honored to have worked with Jean Georges Vongerichten, Norman Aiken, and Jose Andres pairing wine with each chef’s cuisine.

Mike and Jeff are members of the International Food, Wine, and Travel Writers Association, The Society of Wine Educators, and The James Beard Foundation.  They are proud to have received the prestigious Golden Pen Award for food, wine, and travel journalism and equally proud and honored to have been inducted into the Chevaliers du Tastvin at the Chateau du Clos de Vougeout in Burgundy. 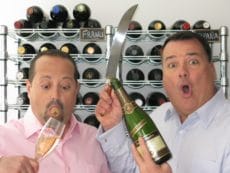 The role of a restaurant sommelier is not to act as a schoolyard bully, but as a friend or trusted teacher…