Miro Uskoković is the Executive Pastry Chef at Gramercy Tavern in New York City. He was born and raised in small town Vrbas in Serbia, where he grew up on his family farm where his mother had a small cheese and cake-making operation.

At seventeen, Miro came to the United States for the first time as part of a high school exchange program in Greentown, Indiana. After returning home to Serbia he attended hospitality college in Novi Sad.

In 2006 he relocated back to Indiana where he nurtured his love of baking, working with Pastry Chef Andrea Kirkpatrick in her shop Pastry Diva in Greentown, known for modern American cakes.

In 2008 Miro enrolled in The Culinary Institute of America, where he received an Associate’s Degree in the culinary program in early 2010. While completing his externship in the savory kitchen at Wallsé, Chef Kurt Gutenbrunner’s flagship restaurant, Miro met Jean-Georges Pastry Chef, Johnny Iuzzini, who offered him the opportunity to train as his production intern during his days off. After completing his program at the CIA he returned to Jean-Georges as a pastry cook. Within a year and a half, Miro had become the Pastry Sous Chef at Jean-Georges, working first under Iuzzini and then Pastry Chef Joseph Murphy.

Miro's work was recognized by Dessert Professional who named him one of the Top Ten Pastry Chefs in North America in 2015. His work was also recognized by many media outlets like Saveur, Bon Appetite, Bake from Scratch, New York Mag, Life and Thyme, Eaterm and here on CulEpi, just to name a few. His work was praised in both Untitled and Gramercy Tavern New York Times reviews by Pete Wells. 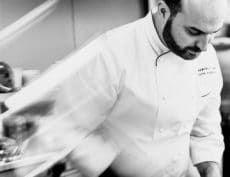 In honor of CulEpi Contributor Miro Uskokovic being named a Semi-Finalist for James Beard Best Pastry Chef, here’s his article on why he supports women’s reproductive rights. Congrats Chef, we’re rooting for you to win!