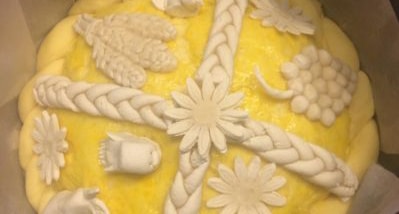 In Serbia, as in most Eastern European Christian countries where people take everything seriously, church and people’s personal views on god are at the top of that list. I usually try to evade such topics, and always feel that it’s expected of me to put a label on my personal beliefs, even if I don’t know how to define them myself. But when I had my first date with the man who turned out to be the love of my life, we progressed from heavy drinking and eating marinated garlic, to talking about religion.

We joked about going on a trip in search of god, but we really wanted to unplug. So we took an extended weekend, four days of quality time. We rented a car and embarked on a mystical journey. Maybe it was the instant infatuation, maybe the wine, or simply both.

We visited an Orthodox women’s monastery in Southern Serbia, high as fuck on weed we found along the way. We lit a few candles inside and then sat on a hill in front of it, observing the religious iconography around us, listening to the birds chirping. It felt as if time was at a standstill.

Months later, it was the season of religious holidays in Serbia. Most families have their patron saint, which they glorify once per year through a religious feast with family and friends, and this celebration is called Slava.

If one were to do this by-the-book, the bread you serve on that special day should be made with holy water. That’s when you call your local priest to come to your house with his assistant for a quick Orthodox Church sing-along session.

I remembered back to that first date with my love and a specific conversation we had about holy water, questioning together what makes certain water more holy than others. So when my mother invited the priest over for the ceremony, the first thing I thought was––I must tell him!

Before the priests show up, you should have some water ready, which they will then make holy. Usually, you pour it in a bowl, or even a bucket if you prefer a larger quantity. After they’re done with the ceremony, this water can be stored any way you choose, in a Coca-Cola bottle or a jar. Clearly, the substance is more important than form.

In 30-plus years I haven’t had much (if any) experience with church rituals, and having lived abroad for over half of my life, last year was the first time I could witness this at my parent’s house, and naturally, I was beyond excited.

Two churchmen in their garbs were singing next to the dining room table while my mother’s two French bulldogs were barking in the background. I was witnessing water turning holy right before my eyes, in the comfort of my family home, and I thought this needed to be recorded. The priest stopped for a second and said, “Girl, put that phone down,” so I did, but not before I managed to snap a picture.

The water, which is now holy, is then stored so you can not only use it for this patron saint celebration, but for Christmas bread as well. The amount of water that should be used isn’t specified anywhere, so I would certainly assume that god won’t judge you based on whether you use a quarter cup, or swap out all the liquid in your bread recipe for holy water. Or perhaps it does matter?

Weeks following that event, my boyfriend asked me to join him for a long weekend in Poland. I remembered that he had expressed the desire to taste the special Serbian bread made with holy water, so I embarked on making it.

As with any food of great significance, especially those on a ritualistic level, everyone has their own version of it; there’s no one original recipe. As a food historian, I can say that’s the case with most foods and dishes. The “original” is nothing more than the first written record, as most of food history, unless recent, is pretty much hearsay.

I studied numerous recipes for the Serbian Slava bread, plus those similar in ingredients and prep methods including panettone, brioche, and Challah, and came up with my own version.

Apart from having holy water as an ingredient, what makes this bread special is that it’s quite decorative. It includes various braids, plus a plethora of sculptures made from a salt-flour concoction whose texture resembles Play-Doh. As per the Serbian Orthodox Church, the Slava bread should include: a barrel, wheat, grapes, leaves, a pigeon, a flower, a fruit, and, depending on to who you ask, a few other things as well.

Respectful of the form to a degree, I did include elaborate braids––I am a sucker for braided bread anyway. But my bread also had an ornate display of salted dough sculptures, including a palm tree, a pineapple, a flamingo, and a unicorn.

Since this was my bread, not associated with any calendar, whether Julian, Gregorian, or even Mayan, a bread that I was making for, and to share with, the most special person in my life, it only felt natural to fuse all religions into it. So, I placed additional embellishments on the bottom like a cross, a crescent moon with a star, the star of David and a few other symbols that could fall into the category of the occult.

Some might argue that my bread was a mockery of the Serbian Orthodox Church, or even religion itself, but I beg to differ. My bread symbolized our personal beliefs. We don’t put labels on things and we don’t call ourselves atheists or agnostics. Our god doesn’t have a name or location, or a schedule like Friday or Sunday. We celebrate everything, the two of us, and life itself. Which is why this holy bread was instead, a bread of inclusion.