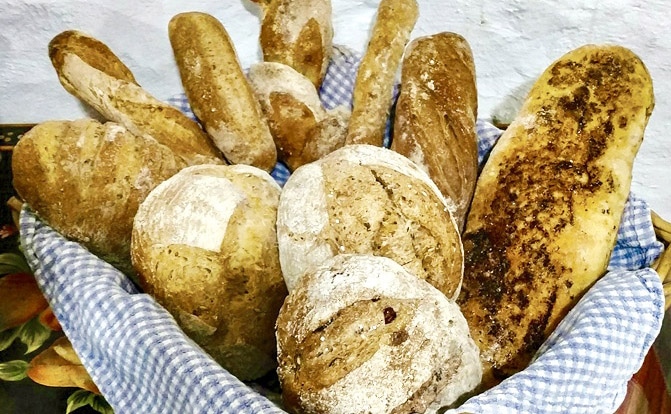 As the host of Beer Sessions Radio, I got involved in the regional slow grains movement back in 2014, when pioneer June Russell of GrowNYC Grains wanted to expand New York’s regional grains project to include beer. So the 2014 NYC Brewer’s Choice event focused on local slow grains, and jumpstarted an interest among brewers to start working with regional malts.

Five years later, the number of regional malt facilities has grown, more farmers are growing specialty grains, more bakers are using regional flour, and more breweries are making beer with malt and grain that’s local to them. In light of all this progress, we’ve decided to make this year’s NYC Brewer’s Choice Event on Wednesday, July 17th a celebration of this ever-growing local slow grains movement.

June, who manages the GrowNYC Grains initiative of the New York City Greenmarket, was honored with the “Snailblazer” award by Slow Food NYC in 2017 for all her hard work and dedication to the cause of local grains. It was a movement that got started when farmers at the Union Square Greenmarket started to get annoyed by bakers selling breads made from commercial flours, while the farmers were all local. But as June explained, there weren’t enough local grains for any of the bakers to use.

So June got started by encouraging local farmers to grow more grains, and she jumpstarted a milling industry so that bakers could use flour from regional grains. Originally called the Greenmarket Regional Grains Project, GrowNYC Grains was “a way to help facilitate local grain production from the ground up to the consumer,” explained June Russell.

Today, bakers are required to use a minimum of 15% local flour to qualify for selling at the NYC Greenmarket and now, thanks to the work of June, GrowNYC Grains and other industry pioneers, according to its website, “GrowNYC Greenmarket bakers use 65,000 pounds of local flour each month.”

Another influential woman spearheading this change in bread baking is Nina Stein White, founder of Bobolink Dairy and Bakehouse in Milford, New Jersey. “I am continuing to explore the growing supply of heritage wheats and other grains that I can now access,” Nina said. “Each type of grain has different amounts of protein, sugar and bran, and each harvest of a particular type may be slightly different based on weather and location.”

Nina also went on to explain that finding these local grains is continuing to get easier in the area as small-scale heritage grains are starting to have a resurgence. “Currently, River Valley Community Grains is working towards gradually changing the landscape of Western New Jersey from growing conventional commodity crops to sustainable and diverse small grain production,” she mentioned. “This group is educating landowners in the reasons why changing their cropland use is beneficial, and is preparing to build a mill in the near future, so that the crops produced can be processed nearby.”

As Nina suggested, it’s not just growing local grains that’s important, but also having access to proper mills to process them. ‘Flour Ambassador’ and author of The New Bread Basket, Amy Halloran said, “mills are a critical piece of infrastructure. Grains require so much cooperation from seed to loaf and ground to glass; I’m fascinated by the shared work that’s bringing so many people together.”

In the same way that mills are crucial for getting bread makers to source locally, access to malts are an essential for getting brewers to do the same. “We’ve tried to engage local brewers as potential grain buyers before, but there was this thing called malt that only seemed to come from Belgium, and that was a big barrier to their participation,” June explained.

Now, malt is the backbone of beer. Malt gives a beer its flavor notes, its color, even its tradition. So for a craft brewery, using specialty grains that are grown and malted locally would be an awesome thing. June credits the local malt barrier-breaking to Andrea Stanley of Valley Malt, “an amazing female entrepreneur and lady maltstress (can there be a cooler occupation?).”

Andrea opened Valley Malt with her husband Christian in 2010. “We finally had a place to have local grains malted on a small scale,” said Russell. “Malting facilities are the key infrastructure bottleneck in terms of getting more beer made with local grains.”

Andrea Stanley was at the 2014 event, where more than 6,000 pounds of NY-grown grains were used for Brewer’s Choice. She recalled, “It was amazing beer! That event featured some of the best beers I’d sampled, and a rare opportunity to meet face-to-face with the brewers!”

On July 17th this year, we’re bringing Slow Grains – Slow Food NYC back to Brewer’s Choice in Brooklyn. As Slow Food NYC reports on their website, “In 2014 Brewers Choice became an event that showcased beer made with regional grains, malted in the northeast. Since then, 12 malting facilities have opened, the number of acres devoted to growing barley has tripled, the number of Farm Brewery licenses has increased by more than 450% and in 2019 the requirement to use New York State ingredients increased to 60%.”

On top of honoring the Slow Grains movement and the shift to local grains, mills and malting facilities, Brewer’s Choice 2019 celebrates the love of beer, bread, and local food, and will continue to be an event that encourages people to brew, bake and shop local grains!