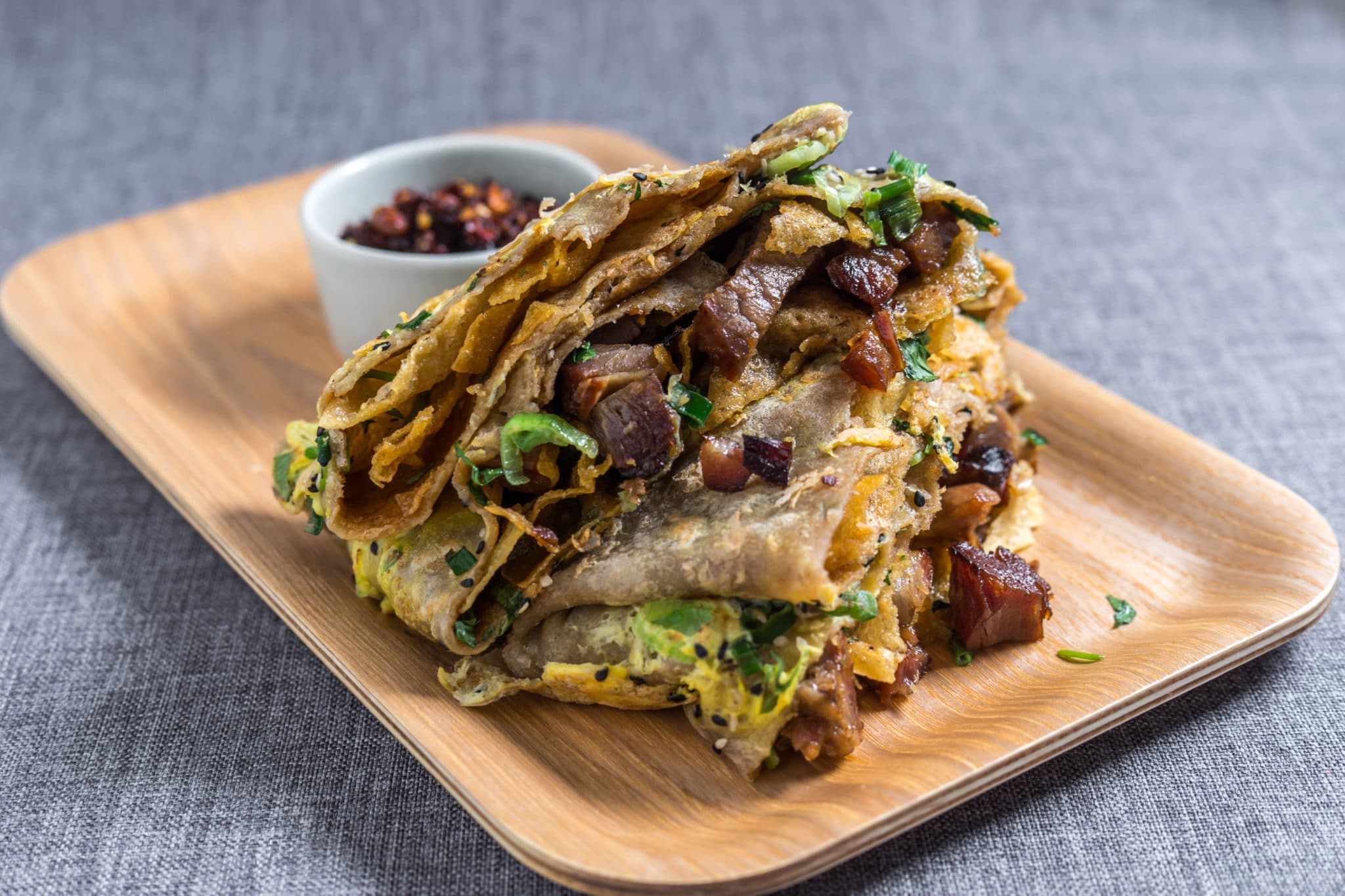 The U.S. and China are a literal ocean apart, so it’s no surprise some of our best foods end up being kept secret from each other. Even for Chinese-Americans like me, raised by our parents’ culinary traditions, there’s still so much Chinese food to discover, especially the elusive street foods that never make it to the dinner table.

Jianbing, more casually known as bing, is one of those items my family never mentioned or made, so when my editor here at CulEpi told me about Mr. Bing, the pictures I Googled didn’t remind me of anything I had eaten at home or abroad.

Intrigued, I reached out to Brian Goldberg, the founder of Mr. Bing, and one of the first to introduce jianbing to the US. In an interview at NYC’s Urbanspace Vanderbilt food-hall, where the first Mr. Bing kiosk was launched in 2015, Brian told me he likes to describe bing as a “Chinese crêpe-wich.”

It’s a fitting description. A bing has the bulk of an American sandwich, with thin, crispy layers of crêpe stuffed with savory Chinese fillings. Popularized on the streets of Beijing as a quick, comfort breakfast food, Brian fell in love with jianbing when he was a Brandeis University student learning Mandarin overseas. He and his classmates would grab one in the mornings from a bicycle cart or street stall in front of their school. “When we were eating bings every day, running around Beijing, we would always joke or talk or dream about bringing bings back to the U.S.”

That dream went on hold until Brian was working in Hong Kong as a financier. After a Beijing trip that flooded him with memories of bing, he found hundreds of YouTube videos of them being prepared on Chinese streets. The comments showed that people were curious about jianbing, and that those who lived too far from the source desperately wanted to try them. Seeing the demand and potential, Brian felt compelled, “If I don’t do this now or soon, someone else is going to do it, and I’m going to regret it for the rest of my life.”

Brian opened his first Mr. Bing in Hong Kong in 2011 and soon had a second. The bing, a new concept to Hong Kong dwellers, were popular, but rent was too high and their price point too low as they tried to compete with other local cheap eats. Even the weather worked against them. “Hong Kong is humid as hell, and hot,” said Brian. “Bing is a hot, heavy food that does much better in northern climates.” Eventually he had to close the Hong Kong locations, but he didn’t give up his dreams of bings. Undaunted, Brian packed up his concept and brought it to America.

New York City proved a cold enough climate for a Mr. Bing pop-up to take off at Urbanspace’s Times Square Christmas Market in 2015. They bought more crêpe machines and continued doing bigger and busier seasonal markets until Urbanspace offered them the permanent indoor kiosk. Mr. Bing soon expanded to a permanent cart in Madison Square Park, a brick-and-mortar location in the East Village, and a new Chelsea location that will be opening, tentatively, around April 2018.

Brian has also taken the Mr. Bing concept to creative places with performance catering, setting up Chinese street food-style bicycle carts in conferences and parties and preparing fresh bings on site. “We even teach you how to make them yourself at home!” said Brian. “It’s interactive, it’s educational. We’re like a U.S.-China cultural bridge, that’s what I like to say.”

Bing-making certainly has a lot of visual appeal, as the many Mr. Bing customers taking photos and videos of the process will tell you.

As I watched a bing-maker at Urbanspace brush hoisin and Lao Gan Ma chili sauce around the crêpe, I was reminded of the spring pancakes, or chunbing, my family would make for dinner. We’d spread tianmienjiang, a bean sauce much like hoisin, over a Chinese flatbread comparable to tortillas, and load meats and vegetables on top before wrapping it into a burrito shape. There’s a special ritual of putting the meal together that I recognized in the jianbing construction — the interactivity and delicate process is both pleasing to watch and fun to perform.

Tasting Mr. Bing’s Peking duck bing really drove it home. I kept thinking of those spring pancakes and other family meals, the taste of hoisin, chili, green onion and duck, all familiar but combined in a package I’d never seen before. It’s a window into the classic flavors of Chinese comfort food, yet Brian’s bings stand on their own as something unique.

Bings in China are traditionally vegetarian — they’re a quick, handheld breakfast food you eat on the way to work. The Mr. Bing menu originally presented bings as a lunch or dinner food by adding meats, but recently expanded to include smaller breakfast bings that differ from the Chinese classic by adding quintessentially American fillings like bacon, egg, cheese, and even Nutella. “There’s not as much diversity in the breakfast space in New York City,” Brian pointed out, “so I think we’re adding something really interesting.”

The recipe for the classic vegetarian bing on the menu comes from Brian’s master chef, Ban Shifu, who helped open the Hong Kong locations. “She’s the one I paid for the original recipe. We fold it up a little more neatly, we serve it on a tray, it’s just a little nicer,” said Brian on how he balances the Chinese bing with American sensibilities. “Americans want the protein. We level it up a little, we put nice meats inside, make it into a meal. Is that Americanizing it? Not exactly, it’s making it more adaptable to the environment here in terms of what people want to eat.”

Brian plans to expand Mr. Bing beyond New York City where the company could have larger locations. He envisions cafés with the feel of a Beijing street food scene, expanded menus, and drive through windows, making jianbing as easy to get in middle America as on the streets of Beijing. “Same way 20 years ago, nobody knew what bubble tea was, nobody knew what sushi was,” he said. “We have the same opportunity to make jianbing a thing. We’re hitting on that time for cool new street foods and more niche, authentic Asian foods. This is a new subsector for Chinese food in America.”

Bings could fit right in with other American Chinese mainstays, and I also see their potential to evolve the cuisine and appeal to Americans of all backgrounds. Even though they’re completely new to me, I can add bings to my list of foods to eat when I’m feeling homesick for Chinese flavors. As Brian put it, “We have two mission statements: introduce Americans to what jianbings are, and help Chinese people return to their childhood through a nostalgic taste of home.”

Delicious! I tried Mr Bing and love it! Rearely does an article instigate so much my appetite. Thank you for putting bings on my radar!