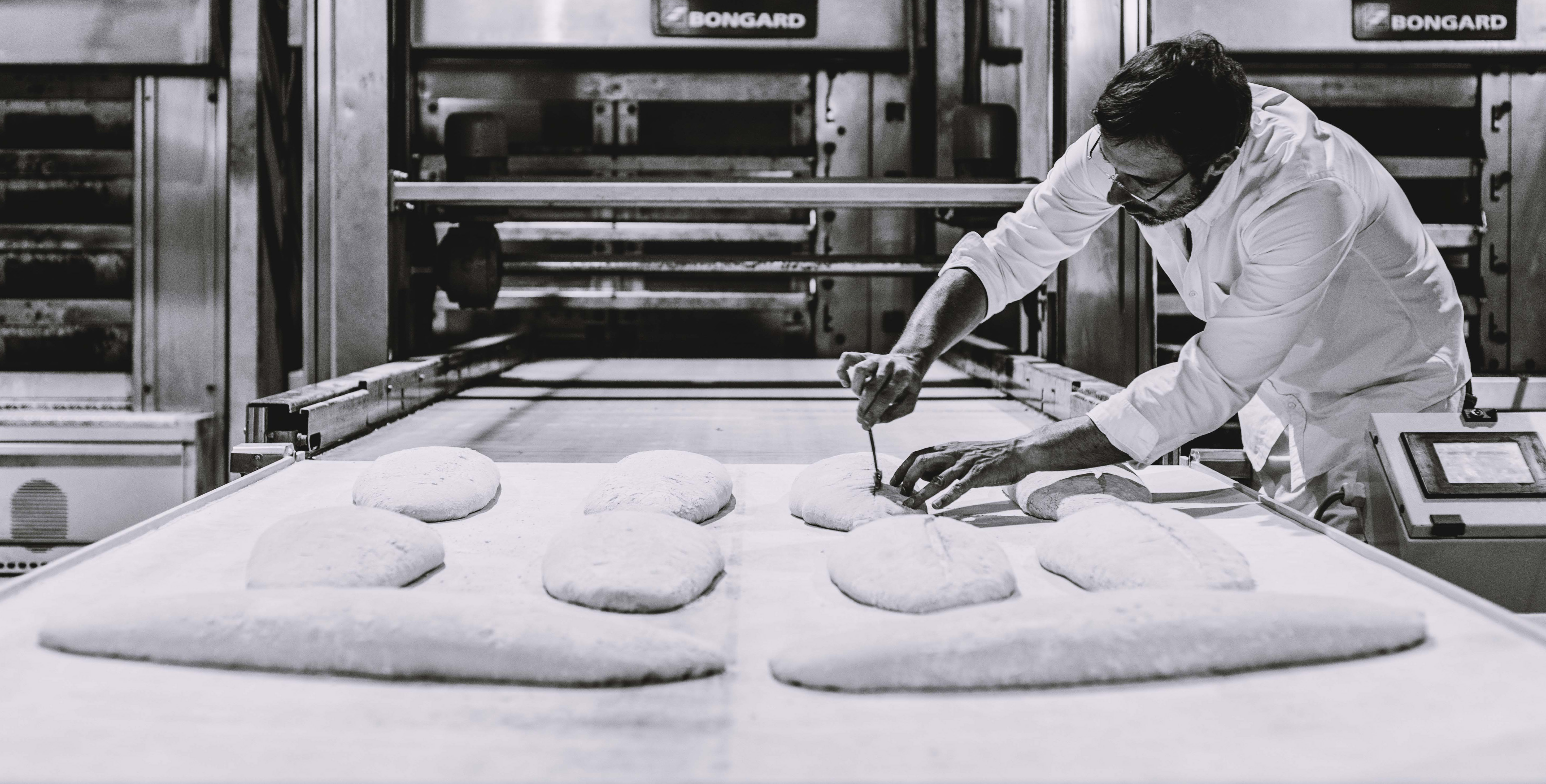 When Uliks Fehmiu, Tole Zurovac, and Bane Stamenkovic came to the U.S. from the former Yugoslavia, they didn’t know if they would ever be able to return home, and they didn’t imagine the success they would attain with their baking and café businesses. The trio behind New York’s Pain D’Avignon and Café D’Avignon were displaced by the collapse of their former country, and they know well how it feels to rebuild a life in a foreign land.

In a Q&A with Uliks Fehmiu, I delved into his experiences as a migrant, his thoughts on the current global refugee crisis, his take on the trend of isolationism, and the eventual success attained by him and his business partners, who have known each other since childhood and share much of the same history and philosophy.

Uliks Fehmiu: “While we’ve never experienced refugee camps, we know how it feels to be displaced, we know what it means to start from zero, to be in a new country, not speak the language and try to jump start your life again. We were very lucky compared to many others from our country. We have friends who survived concentration camps, who lost their arms and legs, who lost the closest members of their families. Many of them were refugees at one point in their lives. Today they are fully integrated members of this country and this amazing city. They are entrepreneurs, business owners, humanitarians.”

There seems to be a misconception that immigrants and refugees bring harm to nations, while often times, they contribute to growth, innovation, economic stimulation and expansion. ~ Uliks Fehmiu

Uliks described the situation that led to the collapse of the former Yugoslavia, which happened as a result of the fall of the Soviet Union and the end of the Cold War, and led to “a brutal war that broke the country apart.” A little known fact here in the US, the former Yugoslavia was a tolerant, multi-ethnic society “where Orthodox Christianity, Islam, and Catholicism intersected.”

Uliks Fehmiu: “The byproduct of democratic changes in Yugoslavia resulted in a rise of nationalism. The lives we had until then vanished overnight. The economy collapsed, inflation was astronomical, and all the values on which the country was based on were forgotten – the values that we are all equal, regardless of our ethnicity, religion or gender. The virus of hate spread like a wildfire and burnt everything in its way. The wars which lasted from 1991-1999 resulted in over of 130,000 deaths, 2.4 million refugees and 2 million internally displaced people.”

These numbers are staggering. Yet, today, the global situation is worse. According to the UN Refugee Agency, there are 71 million displaced people around the world, fleeing from war, extreme poverty, systemic crime, and political instability.

Uliks Fehmiu: “Never in history has the number of displaced people been bigger. Mostly wars create refugees. People create wars. Preventing those wars, or in our case not starting wars, would be the first step towards solving future refugee crises. Why do people migrate? They are looking for a better life, better opportunities that they have been barred from due to a skewed system. People will always migrate, nothing will stop them. But helping developing countries in sustainable ways would definitely reduce the level of migration. Unfortunately we are still very much focused on exploiting these countries rather than empowering them in a real way.”

Our industry is already doing a lot, our kitchens are run by immigrants, but we can always do better. Our kitchens, our bakeries really reflect how diverse and vibrant this country is. ~ Uliks Fehmiu

It’s no big revelation to say that in the US and in other countries today there’s a shocking rise in hatred and vitriol against immigrants and refugees, a growing tendency of some to demonize them, and to keep them from even having a path to seeking asylum or legal residency. So I asked Uliks how he feels about this dangerous trend.

Uliks Fehmiu: “Fear is the easiest tool for those in power to manipulate their voters. This is how politicians make themselves important in our eyes: ‘I am here to protect you from these terrible people who are crossing our borders and taking what is ours’ – classic scapegoating. Put yourself in that position, when would you voluntarily choose to leave an entire life behind? Acknowledge one’s humanity and stop looking at them as the “other.” It’s important to help one another when we can.  There seems to be a misconception that immigrants and refugees bring harm to nations, while often times, they contribute to growth, innovation, economic stimulation and expansion.”

Like so many immigrants in the hospitality industry, Uliks and his partners Tole Zurovac and Bane Stamenkovic, have definitely contributed to economic growth and job creation in the U.S. What started as one bakery in Cape Cod, MA has expanded to New York City, going from wholesale Pain D’Avignon to three food hall locations of Café D’Avignon to their new freestanding space in The Moxy Times Square.

Uliks Fehmiu: “We were very fortunate to meet many people whose kindness and generosity helped us to be where we are today. And they never asked for anything in return. We have never been judged by where we came from. The only thing that mattered was the quality of our work. We worked hard, and we created the environment where all employees from different backgrounds were treated equally and with respect. About 30% of our employees have been with us for almost two decades. We created hundreds of jobs over the last several decades. There is no doubt that the new people coming to this country are its very future.”

Over the years they’ve provided breads to some of the most prestigious chefs and restaurants in New York City, and in the process defied so many BS stereotypes about immigrants coming to the U.S., and proven that generous, welcoming Americans can always be found, especially in hospitality.

Uliks Fehmiu: “It has been a real privilege to work and collaborate with some of the most talented chefs of our time. We live and work in NYC, and NYC is home to some of the best restaurants in the world. We were so fortunate to be supported by so many inspiring and talented individuals. They helped us grow, they pushed us toward mastering the art of bread making. Without them we would not be where we are today. Our industry is already doing a lot, our kitchens are run by immigrants, but we can always do better. Our kitchens, our bakeries really reflect how diverse and vibrant this country is.”

Some of the products you’ll find at Café D’Avignon are classic French pastry, but the guys get nostalgic for pastries and breads from their old country, and they even create completely new items inspired by the fabulous fusions that are found throughout the U.S. culinary scene.

Uliks Fehmiu: “Our breads have their roots in European traditions of bread making, particularly French. But every once in while we will do something loosely inspired by the bread or pastries from our region. Our Baklava Croissant is the most recent example of this. We created a crossover between this pastry that we grew up loving and the traditional French croissant.”

Having grown up together in the former Yugoslavia means these partners have a deep friendship that has helped them find success in their new country. When I met Uliks Fehmiu and Bane Stamenkovic at Café D’Avignon, it was clear their shared history was a part of their present success, and indeed their happiness as well.

Uliks Fehmiu: “We were all friends before we became business partners. In that respect, there is no relevance for us in the fact that we are all immigrants. But it was very important for us to have each other. When you become an immigrant, in a way you stop to exist in the way you existed before. The context of your life is interrupted and you are transplanted into a foreign soil. Not every transplant is successful. Having someone around you who is giving your existence some continuity is very important. That sense of uninterrupted friendship and community meant a lot to us.”

It’s hard for anyone who hasn’t experienced this devastating kind of disruption in their lives to imagine what it’s like to be uprooted so completely. But, imagine it we must try to do, if we are to be more compassionate than fearful of the nearly 70 million displaced people living in the world today.

Uliks Fehmiu: “Often I question our own humanity, but deep down I truly believe that people are good. We are good, but often scared. We should try really hard to recognize where our fear is coming from and distinguish a real fear from a manufactured one. That manufactured fear is preventing us from being free. Free to see how much we have, how much we can share, that there is room for everyone and more. Once we are free, we will continue to build bridges, not the other way around.”