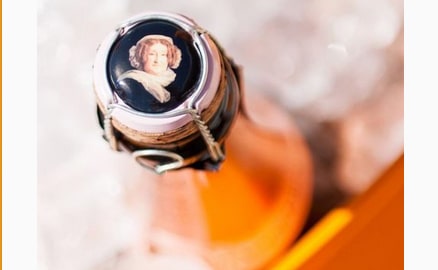 It was a run-of-the-mill weekday afternoon and my grandma took me on a quick trip to the store where she purchased just three items: a bouquet of flowers, a book, and a bottle of Veuve Clicquot. To this day, that childhood memory stands out in my mind, and I credit my love of Champagne to my grandmother, who even into her late eighties, could often be found with a glass of bubbly in hand. She never waited for a special occasion.

Though my grandma was raised in a small town in rural North Carolina, she had a worldly palette and a love for the finer things in life, including Champagne. I’ll always remember her as the epitome of sophistication and style. As it turns out, the bottle inside that iconic orange box I so vividly remember in my grandma’s shopping cart has a rich history, and one that also centers around a strong, savvy, sophisticated woman—Barbe-Nicole Clicquot Ponsardin, or more familiarly, La Grande Dame.

The word ‘veuve’ means widow in French, and the brand’s English translation inspired the title for cultural historian and author Tilar J. Mazzeo’s fascinating account of the woman responsible for the brand’s success — “The Widow Clicquot: The Story of a Champagne Empire and the Woman who Ruled It.”

Mazzeo’s riveting work is a page-turner, and one of my personal favorite non-fiction reads. The book provides an in-depth look at how — against all odds, as a woman born in 18th century France — Barbe-Nicole was able to transform her husband’s lackluster Champagne business into a gleaming success story after he left her a widow in 1805, when she was just 27 years old.

After her husband’s death, she went to her father-in-law with a bold proposition: that she take over the family business. He believed in her, and on the condition that she complete a four-year wine-making apprenticeship, he agreed.

The Widow Clicquot seized the rare opportunity to run a company. She was brave, bold, and way ahead of her time. When France was at war and Napoleon issued an embargo on French exports, she smuggled her bubbly to the Czar in Russia — who had an unquenchable thirst for Champagne. After peace was declared, Vueve Clicquot became the only Champagne the Russian ruler would drink.

She would entertain France’s most powerful elites as a marketing tactic and a way to influence the decision-makers of her time. To stay at the cutting-edge of global commerce, she became one of the first winemakers to create a brand identity by using a wine label.

In a brilliant move that still impacts the Champagne industry today, she developed a riddling method that completely revolutionized the production of bubbly. Her genius idea to store bottles at an angle allowed the lees to collect in the necks of the bottles, which solved the problem of cloudy Champagne, and dramatically sped up production time. Her cellar workers initially laughed at the idea, so she drilled holes in her own kitchen table to experiment, and ended up proving them all wrong.

As Mazzeo puts it,“The odds against her had been genuinely staggering. There was not just a glass ceiling, there was an industrial culture that increasingly told women they had no place in the public world of business and economics, no foothold even on the first rung of the corporate ladder.”

In Napoleonic France, La Grand Dame managed to do what is still all too rare for women today. According to Wine Enthusiast, 2021 there are only a handful of champagne houses run by women, and the wine world in general is still largely male-dominated and non-inclusive.

However, there are some signs of positive change, with groups like La Transmission, an organization that brings together female leaders in the Champagne industry, paving the way towards a more equitable future.

There’s a lot to be learned from the Widow Clicquot, and Mazzeo’s book shines a light on her determination, grit, audacity, and fearlessness. Her influence can still be felt in the Champagne world today, and the entire industry owes a great deal of its success to this forward-thinking business woman. So, the next time you pop a bottle of bubbly and raise a glass, don’t forget to toast the visionary woman who started it all.