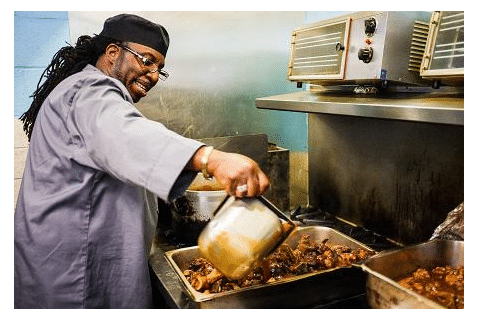 The Food Recovery Network, who have been contributors here on CulEpi, stated today, “We are devastated by the continued loss of Black Lives. Today, one of our Food Recovery Network Friends, David McAtee, known for sharing joy through his barbecue, was shot and killed by law enforcement officers in Louisville, Kentucky. His tragic death is another reminder of the reality of being black in America…

“This morning we shared this resource with our staff and would like to extend it to you, our broader community. The People’s School of DC is a website which offers resources as well as sources of inspiration. It’s a community resource built by volunteers and you are invited to share the resources you think would help us all.”

With heavy hearts we share this communication with you, and we offer our deepest sympathy to the friends, family, and community of Chef David McAtee.

According to local reporting by the Courier Journal, “LMPD Chief Steve Conrad said earlier in the day that someone in the crowd shot at officers and both police and National Guard soldiers “returned fire.” It was unclear who shot and killed McAtee.”

The Courier Journal quoted Governor Andy Beshear of Kentucky speaking of the tragedy, “Gov. Andy Beshear spoke with frustration about the fatal shooting of a black man in the West End on Monday morning, calling it “unacceptable” that Louisville police officers involved did not have their body cameras turned on during the interaction.

“After everything that’s happened, this can’t happen,” Beshear said Monday afternoon. “It shouldn’t have.”

Later reporting from the Courier Journal noted that, “…protests continued downtown and at the site where David McAtee was killed. At least three LMPD officers marched arm-in-arm with several hundred protesters down Sixth Street, according to Courier Journal reporter Mandy McLaren, chanting the names of Breonna Taylor and David McAtee, and “No justice, no peace, prosecute the police” as a helicopter hovered overheard.”

Here’s a list of organizations where you can make donations, sign petitions, and volunteer to help black communities and individuals across America. Please do what you can to help!

National Association for the Advancement of Colored People (NAACP)