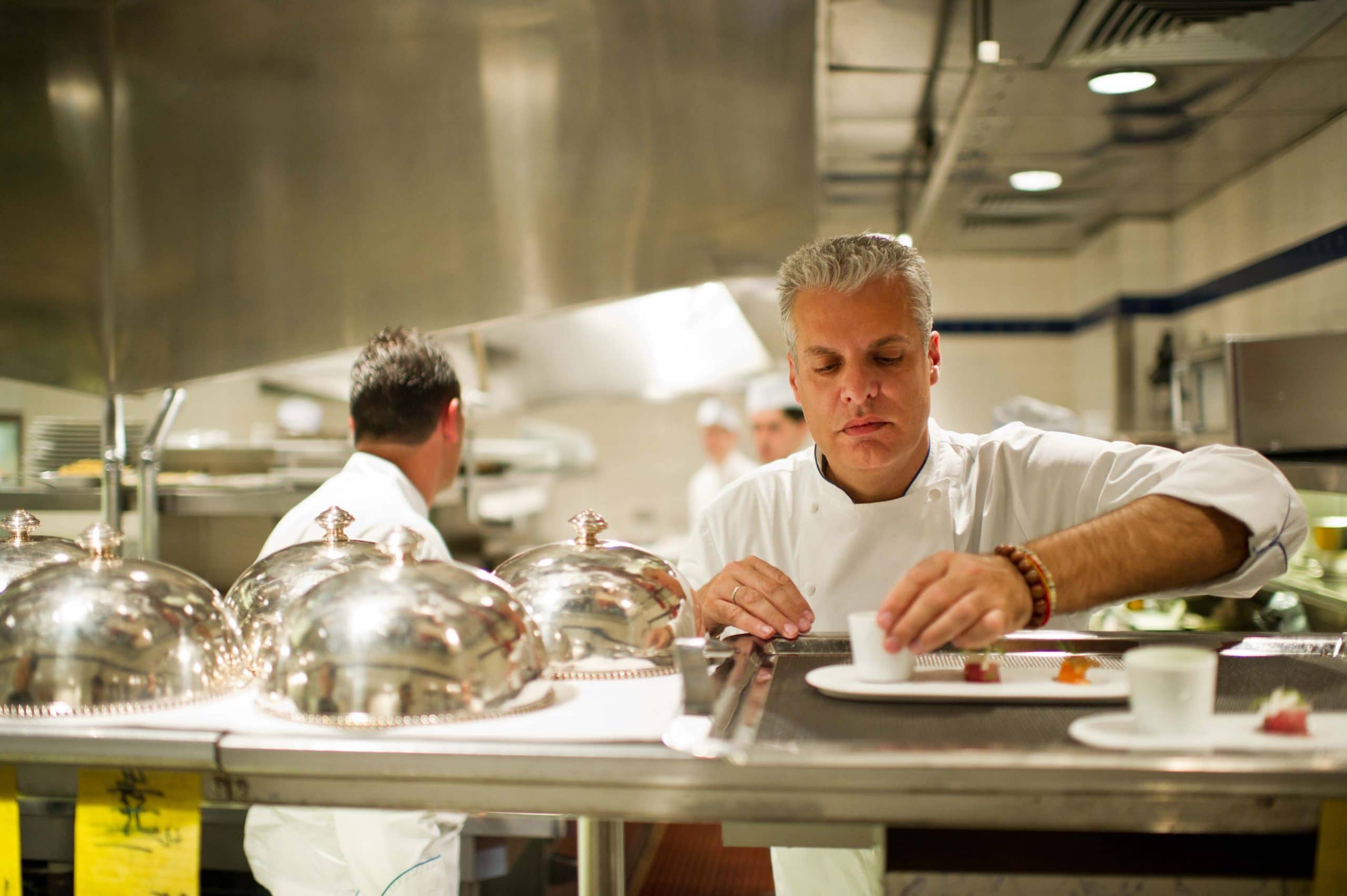 Chef Eric Ripert’s inner calm can be sensed in his outward demeanor and his ideals can be ascertained in his actions. The Executive Chef and Partner of Le Bernardin speaks with a gentle yet commanding voice, and one gets the feeling when talking with him that he’s truly present in the moment, no matter the many distractions that swirl around him at any given time.

Eric Ripert wasn’t always as you’ll find him today, he admitted, “I used to get very stressed, and I used to get very angry when I was young, until I realized I was totally wrong. I shouldn’t be proud of my anger. A lot of chefs are happy to be angry in the kitchen or act like dictators – but it is a weakness. When you realize that, and when you work on it, your life changes, it becomes much better.”

While Ripert converted to Buddhism some years ago, I wondered if his journey towards the ideal calm began before his conversion and I joked that not every cook and chef wants to become a Buddhist just to find some peace in the chaos of the kitchen. He laughed, “No, you don’t have to!” Then he continued on to explain the lessons he’s been teaching his team since before Buddhism.

“I always said, especially to our young sous-chefs, ‘Nobody is happy to be angry, and anger is a weakness that’s fueled by stress.’ Now that’s not a Buddhist statement, it’s a universal statement. Therefore, if you fight stress, and you have a compassionate approach to dealing with your team and your people, then you will have a more pleasant journey. That again is a more universal way of living, it is not necessarily about Buddhism or any other religion.”

With the global acclaim of his Michelin 3-star Le Bernardin in New York City, Chef Ripert has been approached with many opportunities to expand, with offers from Las Vegas and beyond. Yet, with only one exception – Blue by Eric Ripert at The Ritz-Carlton Grand Cayman – he’s refused every offer to open more restaurants, even when the financial gain would have been sizable. In today’s world where people often think more is better, I was curious why he was content to cap his capacity at two.

“You can always make more, and you always will find someone who has much more than you in terms of income or number of restaurants,” he replied without hesitation. “But at the end of the day – and you nailed it by saying I am ‘content’ – that’s exactly it, you have to find your own level of contentment. Some people would be bored with just one or two restaurants, they need more and they’re happy that way. I’m very different. If I had ten restaurants I’d be very stressed and unhappy!”

From that reply I teased him a little, mentioning the somewhat American mantra that greed is good. He laughed loudly and replied, “Oh yes! I know an American President who says that! That you’re never greedy enough!” We laughed so hard at that it took a moment to catch our breath, then he slid back into thoughtfulness. “In our industry we’re not necessarily here to become millionaires and billionaires. I think in other industries we do see a lot of greed, and people do things just for greed. But in our industry, I think it’s hard to find people who are only motivated by greed.”

There are quite a lot of things about the world today that Chef Ripert finds alarming, the staggering growth of greed is only one of them. He also recognizes the paradox of wanting to serve those in need while also serving those who can afford to eat at his restaurants.

“Obviously, I feed people who are lucky enough to come to Le Bernardin, and it’s a luxury restaurant as you know. At the same time you have people just a couple blocks away who are hungry. New York City is a city of contrast. You have some very wealthy people, a great middle class, and then you have a lot of people who live under the poverty level. I think it’s 1.3 million people. Also in the US and therefore New York, forty percent of food is wasted, it goes into the garbage.”

The combination of his concerns found fulfillment in his work with City Harvest, which began twenty-six years ago when he would donate food for distribution throughout the city’s shelters. Today he is the Vice-Chair of the organization, and was proud to point out that they now distribute 63 million pounds of food in NYC. “A lot of these people have jobs and have families, they are not necessarily homeless, they need help because they don’t have enough money to pay the rent, send the kids to school, and still have enough money to put food on the table.”

“City Harvest rescues food that’s perfectly nutritious and fresh and delicious, and delivers that food in a very efficient manner to the communities in need,” emphasized Ripert. “It touches me very much and I feel very good about my work with City Harvest.”

Just before this interview, I met up with Eric at the annual gala for another charity, Careers Through Culinary Arts Program (C-CAP), where he was being honored for his dedication to mentoring the next generation of industry leaders, teaching them not only how to be professionals in the front or back of house, but also how to strive to be good people personally and professionally.

“C-CAP is something that we all care about in the industry because, first of all, we have all been those young teenagers who are looking for guidance. We connect with them in this feeling, and we want to make sure they do the right thing and make the right choices. At the same time, all of us restaurateurs need these young people in our kitchens, they are the future.”

If you’ve read Eric Ripert’s deeply personal memoir 32 Yolks then you know he isn’t just paying lip service to youth who need guidance. He himself had to overcome abuse and loss, and find a way to carve out a life where, eventually, he could create his own happiness. Perhaps it was the personal chaos of his childhood, and the physically violent kitchens where he learned his craft, that led him down the path of what some would call enlightenment.

This familiarity with chaos can lead some to strive for calm, strive to be compassionate. It certainly has with Chef Ripert. And today, with a son of his own, Ripert expressed concerns about the world in which he – and everyone else – must raise children.

“With young people, in school they teach mathematics, language, science and many other things, but there’s no program or class in being a kind person, in being compassionate, in being part of the community, and being generous, and giving back. I think that’s what we’re lacking in our world, in the Western world. We have to think about that, we have to think about how our young people are being educated and how they can learn a more altruistic approach to the world. It has to happen because we are reaching a level of selfishness, stress and insecurity that is almost unbearable.”

Not wanting to pass on the opportunity to follow up on something I’d read about Chef Ripert in another interview, I threw him a curveball at the end of our conscientious conversation. I asked him about his cats! Specifically, that I’d read his cats know not to enter his meditation room. He burst into warm-hearted laughter.