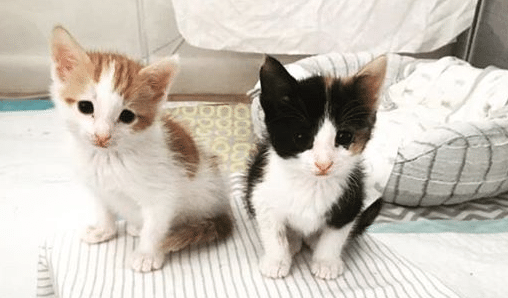 I’ve been seeing a wave of chefs on social media who have adopted dogs and cats from shelters and rescue organizations, and are encouraging others to do the same. In our home, we’ve rescued a total of five pups over the years, who have but unconditional love to our lives. Adopting and rescuing animals, and making sure they’re spayed and neutered, is something everyone, not just chefs on social media, should be championing!

Fact is, we just shouldn’t be buying puppies and kitties from pet stores anymore. It’s a known fact that the majority of puppies and kitties sold in pet stores are from puppy and kitty mills, which usually are really really horrible places. On a good day, maybe half of these puppy/cat mills are licensed and monitored by local agencies. But having a license doesn’t guarantee the condition for the animals in these facilities is good. This article by Best Friends Animal Society, gives you a good idea of the problem.

These animal mills are more often than not inhumane, high-volume breeding grounds that pump out animals for profit, all the while ignoring the needs of the newborns and their parents. Life in these animal mills can be horrific.

The female dogs and cats used for breeding will spend their entire life living in a cramped, often unsanitary cage, with little to no personal attention, care or affection. They are never allowed to roam free, exercise, play or even socialize with other animals. Once they can no longer breed, along with males that are also past their prime, they are usually killed, abandoned, or dumped in a kill shelter.

“Archie was rescued from a kill shelter, what a rewarding way to save a life, I have a lot of respect for the people that fight every day for these animals! ~ Jean-Francois Bonnet, Brooklyn Born Chocolate

The sanitation and preventive care in many puppy and kitty mills is nearly nonexistent, leaving the majority of puppies and kittens sick and unadoptable. Only a few lucky ones will be adoptable, leaving the rest to be euthanized. This video put out by the Dodo (warning it’s tough to watch!), takes you inside a kitty mill, where you see just how cruel these places can be.

Having the ability to bring an animal from a less than savory situation, and give them nothing but love and attention is a true dream. Adopting is so important, and the bond created is unbreakable. ~ Chef Evan Hennessey, Stages at One Washington

My first rescue was Guy (pronounced Gi), a Chiweenie I found roaming the streets of Oakland, California 11 years ago. Roxie was another rescue, a miniature Dachshund who passed away at the age of 11 from health complications that were the result of being from a puppy mill. Charlie was a Jack Russell who also passed away from health complications resulting from an irresponsible breeder, and she passed away at just four years old. Hazel is our Miniature / Chihuahua mix who came to us after being abandoned and hit by a motorcycle. And there’s Cody, the newest member of the pack, a miniature Dachshund who was surrendered to a local rescue organization.

Adopting animals does come with some challenges, but the love you get in return from saving a life is worth them all. We adopted Roxie at the age of seven months from a pet store that only did adoptions. The puppy mill she had come from had broken her tail and performed her spaying themselves which left her with quite a large scar. Since she had been spayed she was useless to them, therefore it was known she would be euthanized if the pet store returned her to the puppy mill in Iowa.

Roxie took quite some to adjust to her new surroundings. For the first three we would have to fish her out from under the sofa or kitchen island because every sound frightened her. Around the time she was finally coming out of her shell is also the same time we discovered she was epileptic.

When Roxie was nine she was diagnosed with cancer of the optical nerve in both eyes. We opted to have her eyes removed to save her life. Roxie had always been smothered with love from everyone that knew her, especially in the last two years of her life. She passed at home at the age of 11 when spread to her brain and there was nothing more we could do.

According to the Humane Society of America and the ASPCA between 1.5 and 3 million dogs and cats are euthanized each year. By adopting from shelters and rescue organizations not only can we bring this number down, but we can also provide a loving home for many animals in need. Animals that through no fault of their own have been dealt a bad hand in life.

Charlotte and Oliver were rescued from a farm upstate, born to a semi-feral barn cat. We’ve since learned that some of the feral cats in that area have been TNR’d – one small step toward reducing the number of kittens in similar situations, in need of ‘forever’ homes ~ Pastry Chef Michael Laiskonis, Recolte Dessert Bar

One of the states leading the charge against animal mills is California. As of January 1st 2019 California has enacted law AB 485 requiring pet stores to only sell cats and dogs (and rabbits) obtained from animal shelters and rescue organizations. This makes California the first state in the union to ban the sale of non-rescue animals in retail pet stores. This is a standard every state should and must follow.

Another piece of this puzzle is breeders, who in most cases, but not always, are more reputable. In order to make breeders more safe accountable, regulations should be passed to control and monitor them. Creating a system of inspection, perhaps grade-based, to alert potential buyers of conditions, require breeders to have regular visits by local or state inspectors, and also make visits by potential buyers a requirement before purchasing. Finally, creating a tax or fee to be by breeders that would go to local rescue organizations would help cover the cost of rescuing and caring abandoned or abused animals.

Adopting rescue animals comes with special challenges, they often have behavioral and health issues, but you will never know unconditional love like the type they will ultimately give you in return. I know for myself and as well as for chefs like Michael Laiskonis, Jean-Francoise Bonnet and Evan Hennessey, and also Regina Varolli here