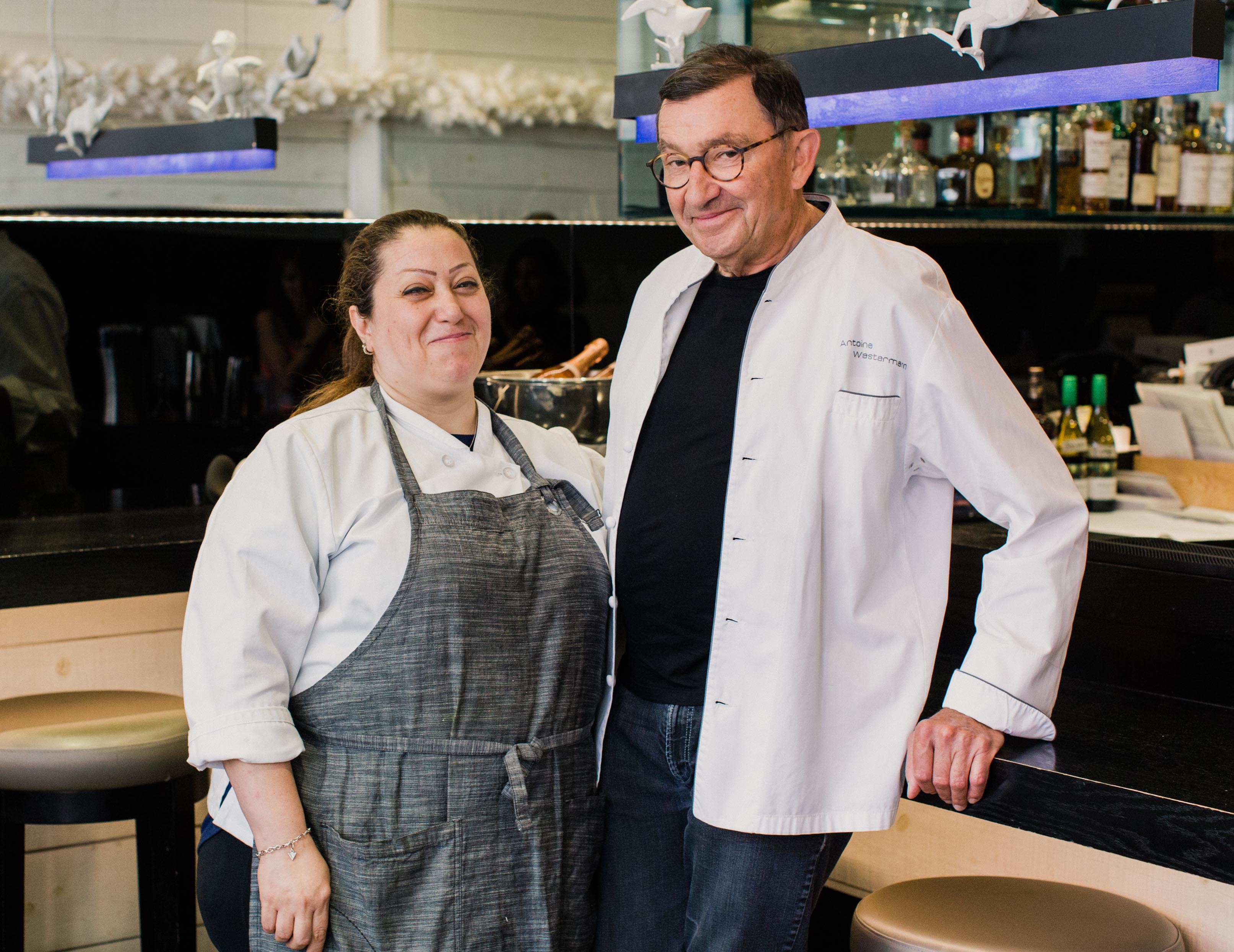 June 20th is World Refugee Day, and in cities around the globe, chefs are literally standing with refugees, in their restaurants and kitchens, cooking up dishes from the refugee chefs’ home countries.  The Refugee Food Festival, which began in Paris, is an international series of dinners, and 2018 saw its inaugural run in New York City, where CulEpi Contributing Editor Meryle Evans and I scooted up to the Show Kitchen counter at Antoine Westermann’s Le Coq Rico, and dug into a delicious traditional meal crafted by Chef Nasrin, an Iranian refugee who was once a cook at a café in Tehran.

Chef Antoine Westermann, who was a Michelin 3-star chef in Paris until he asked the Guide Michelin to remove the honor because it was stifling his creativity, said to us of his participation, “My wife is really involved with this organization, and she asked me to host this dinner here.  I came only yesterday from Paris to be here and be a part of this dinner.  It’s only one day and I wish it could be two days, or more.  Next time!”

Today, Chef Nasrin works at Eat Offbeat, a catering company in Long Island City, founded by sister and brother Manal and Wissam Kahi, both of whom are immigrants as well as graduates of Columbia University.  Eat Offbeat hires refugee chefs who have come here seeking asylum, and who have made this city a better place for the talents they bring to the table.

We got lucky enough to meet Manal and Wissam in the packed-to-capacity Le Coq Rico, and Wissam said of the opportunity, “It’s exhilarating for us to see Chef Nasrin cooking at such an illustrious restaurant.  She’s embracing a unique opportunity for her professional development in preparing these beautiful dishes with the support and collaboration of Chef Westermann and his talented team.”

As food industry professionals we need to provide resources and platforms to help realize the full potential of those in our community.  It is said that diversity is a source of innovation and creativity, and there’s nothing better than food to illustrate it.  The ‘melting pot’ is literal!  ~  Wissam Kahi, Eat Offbeat

As Meryle and I sat at the sleek Show Kitchen counter, a world away from the horrific circumstances refugees face every day, it seemed most everyone was ordering the special menu by Chef Nasrin.  It started conversations. Strangers were talking with each other about its beauty, its unique flavors, and about how we all support the diversity that makes up this great city – this country – most especially its restaurants.  We shared how appalled we were at the current Administration’s stance towards immigrants and refugees, so callous that now they’ve gone so far as to separate children from their families at the border.

While Congress is debating immigration reform and the Trump Administration is pulling out of the UN Human Rights Council, it’s important to remember these decisions are affecting our fellow human beings, people who have dreams and talents and ambitions, and who work damn hard to fulfill them.

Marlene Bonvalot of the Refugee Food Festival spoke of a phenomenon that we witnessed at Le Coq Rico.  “Food is a light way to get more serious conversations started, and in the case of the festival, to highlight the skills, know-hows and cultural heritage of refugee chefs. Hopefully, this can help change the image people may have of refugees as a whole.”

Food is something we all share, everyone eats. It is both universal and extremely personal, and as such, it’s a great way to introduce people to other cultures.  ~  Marlene Bonvalot, Refugee Food Festival

When I had to honor to speak briefly with the busy Chef Nasrin in the bustling entry of Le Coq Rico, she was shy to open up, knowing the current political climate doesn’t make people like her feel free to speak their minds.  Her one message was this, “Believe us.  Believe the refugees who come here looking for asylum.  Please, know we are speaking the truth.”

You can support the Refugee Food Festival and help it grow!

Chefs all over the world can host dinners, and anyone can volunteer.  We hope you’ll reach out to them and join in support of refugees!