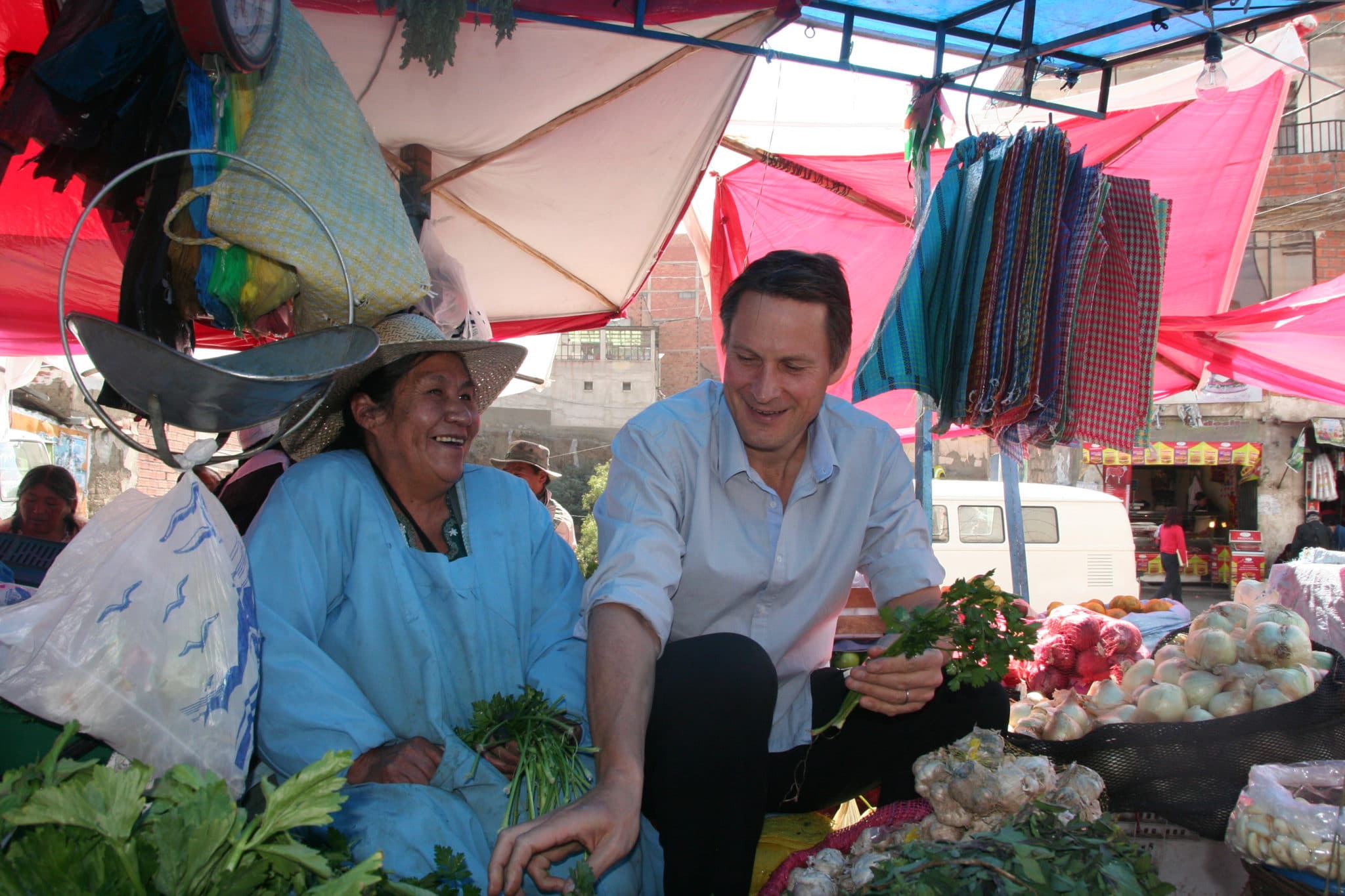 I was a young teen when Claus Meyer first appeared on national Danish TV – it was 1992 and cooking shows weren’t common in Denmark. I remember the joy of seeing this tall, strong-jawed young man juggling French copper pots and pans while talking nonstop and vigorously about fresh produce and primarily French food.  He opened my eyes to the fact that there were people out there who loved food even more than me, and they definitely knew what they were talking about!

Years later I came to work with Claus Meyer as the editor of a series of cookbooks he was writing. His language was still potent and his tone of voice enthusiastic. To this day I don’t think I’ve ever met anyone who talks as passionately and personally about food.

Known the world over as “the founding father of the New Nordic Kitchen” and the originator of restaurant Noma, Claus Meyer was once a neglected boy from the outskirts of Denmark who grew up eating poor food. Canned, fatty and unhealthy, to the extent that at age 17 he was overweight and unhappy. His dad was a coldhearted patriarch and his mother started drinking when their marriage fell apart – they weren’t able to share any love for food with young Claus – and actually love itself seems to have been a rarity in their family.

Eventually Claus escaped to France to be an au pair – and it was there, in the home of a fourth generation boulanger and patissier in Gascogne, that he found love.  Love for food, love for family, and love for life. I’m quite sure that in every cookbook foreword Claus has ever written (or that I have read or edited anyway) Guy Sverzut is mentioned as the foremost fountain of food love for the young man who would mature into one of the world’s most influential restaurateurs, as well as authors, philanthropists, and food entrepreneurs.

In France, Claus Meyer reached the life-changing conclusion that if you eat bad food you’ll lead a bad life – and vice versa.

Guy Sverzut came to care for Claus, showing him that even seemingly lost causes can find hope and purpose in the loving hands of someone who sees their needs and nurtures their potential.  Proving to be a lesson that shaped Meyer’s life and made him into the philanthropist who would in 2010 found The Melting Pot Foundation.

It was this overwhelming French influence that shone through when Claus Meyer did his first primetime cooking shows in the early 1990’s. He had finished a degree in International Business Economics and was employed doing small-scale French catering jobs with his cargo bike as transportation.  Soon he became a local celebrity. At that time his mission in life was to preach French gastronomy and French produce to us Danes at a time when we needed it most. The 70s and 80s were a culinary nightmare in Denmark, and a lot of us grew up on minced meat dishes, brown gravy thick as baby mash, and lots of shitty processed food.

Like Julia Child in America, through his TV shows Claus Meyer taught me and other Danes how to make French classics like Tarte Tatin and French sauces. He began importing French products like Valrhona chocolate, and opening our eyes to the pleasures of French food.  Yet, somewhere along the way his mission changed. I’ve heard him say that it coincided with the new Danish avant-garde film movement known as ‘Dogma 95’ where film-makers such as Lars Von Trier and Thomas Vinterberg created a set of strict film production rules to liberate creativity from the strait jacket of dogma, and to compete with Hollywood productions on new and homegrown terms.

Claus Meyer’s culinary counterpart was the co-founder of what was to become the most influential restaurant in the world, Noma. Meyer was the one who hired René Redzepi and together they opened restaurant Noma in 2003. The name itself told the story: ‘No’ for Nordic’ and ‘ma’ for ‘mad’ – the Danish word for ‘food’.

Together, Claus Meyer and René Redzepi aimed for nothing less than a complete rebirth of Nordic cuisine.

A few years after the opening of Noma, Claus Meyer and René Redzepi drafted their own dogma, the Manifesto of The New Nordic Kitchen, and they organized a small symposium in the loft atop restaurant Noma. The Manifesto was signed by chefs from the Scandinavian countries, all committing to use only locally grown products. I was there as a reporter and at the time, and even I didn’t realize the importance of the manifesto – all the changes it forecasted not only in Danish food culture but in the culinary world as a whole.

The keywords of the manifesto are the words we most often use to describe the New Nordic Kitchen: pure, fresh, local, simple, and ethical. Words and values that have become part of high level cooking worldwide. The vision of the New Nordic Kitchen easily translated into other countries’ kitchens and I think that today – opposite just 15 years ago – it is highly unlikely to find chefs of a certain caliber who don’t use as much seasonal, locally grown produce as they can, they might even have their own garden, or they go foraging for wild herbs and plants.

Today’s great chefs take pride in their local produce and like to showcase ingredients that are unique to their region whether in Peru, Brazil, Sweden, Japan or United States. They most likely use organic produce and there’s a good chance they have a no waste kitchen policy.  All of these practices were a part of Meyer and Redzepi’s manifesto.

Though Claus Meyer was the mastermind behind Noma, he is no longer an active part of the Michelin two-star restaurant that has been crowned number one on The World’s 50 Best Restaurants list four times within five years, being the only restaurant to take the title from elBulli.  In 2013 Claus and René Redzepi ‘divorced’ and Meyer sold most of his share in the restaurant, enabling Redzepi to assume full leadership.

I can’t and won’t claim that Claus Meyer is the instigator of all things amazing in the way chefs and restauranteurs worldwide work today, but there is no doubt that Claus Meyer changed the Danish food culture and transformed Denmark from culinary wasteland to front-runner.

There is a ‘before Noma’ and ‘after Noma’ when Danes talk about food, restaurants, produce and even tourism. And there certainly is a ‘before and after Claus Meyer.’

The beautiful thing is that The New Nordic Kitchen influenced big players in the Danish food industry, dairy producers, breweries, and super markets all changed for the better, and in the end of this food chain, the eating habits of ordinary people vastly improved. So besides inspiring a blooming culinary scene in Copenhagen, Denmark and other Nordic countries, another ‘Noma Effect’ is simply better food producers and better products for every Dane, not just those eating in high-end restaurants.

Claus once told me “Two minds think better than one.” A belief that permeates his whole organization – from books to restaurants, delis and food production – though Claus Meyer is the man in charge he is always open to other people, their ideas and their passion. In my opinion, one of his many strengths as a food entrepreneur is his ability to create a community of people joining forces towards a shared cause.

His unique brand of community-building is today helping Meyer meet some of the greatest challenges of his career, the reopening of his fine-dining Michelin-starred restaurant Agern after a flood closed its doors, and the continued evolution of The Great Northern Food Hall, both located in NYC’s monumental Grand Central Station, all while watching over Meyers Bageri, a bakery and coffee roastery in Brooklyn, Restaurant Norman in Greenpoint, and his charitable venture in Brownsville.

Despite the challenges of opening so many businesses and relocating to another country, for Meyer, failure is not an option.

This is a man who has invested most of his adult life – and most of his money – in propagating his vision of cooking and his love of food. To him, the love of food equals a good life, and even though Claus has indeed made a good life for himself, his wife and their 3 children, this isn’t enough.

Parallel to the Grand Central and Brooklyn projects, Claus Meyer is opening a community restaurant and cooking school in Brownsville, a poverty-stricken neighborhood in Brooklyn mostly known for its crime statistics. The Brownsville Community Culinary Center will house a cooking school, a community restaurant, a bakery, and a café, and will change the futures of many kids who, like Claus himself, grew up under difficult circumstances, eating unhealthy food.  Through his Melting Pot Foundation, Meyer has already done cooking school projects among Danish prison inmates and created a cooking school for Bolivian teens.

There are times when I see Claus and he looks tired. The 100+ hour workweeks and the constant striving to do better makes its mark. But tired or not – when he’s talking about food it’s like turning on the switch to a brilliant light. His eyes brighten, his voice grows and his hands awake with the rest of his body, throwing out gestures in the air – he’s a missionary preaching his inspirational and loving food Mass.  And if you think I’m overstating the case, just watch Claus Meyer’s TED Talk on ‘Unfolding the potential of indigenous food cultures,’ or see the clip from the Roskilde Festival where he jumps on a big bale of straw and from this humble pulpit gives a spirited sermon on Nordic bread baking to an exuberant congregation.  Claus Meyer truly is the missionary man of The New Nordic Kitchen – and I’m a believer.