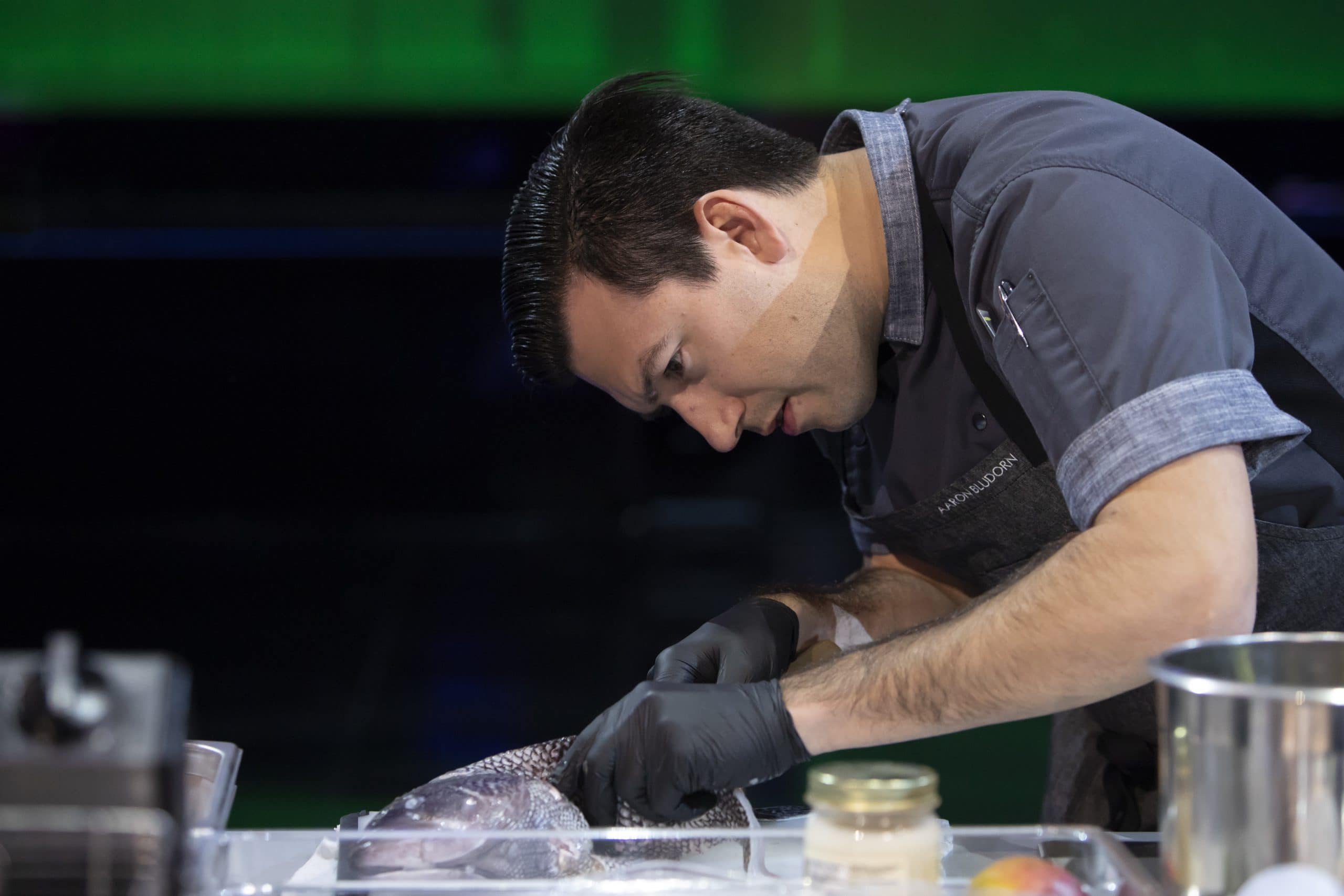 “It was awe-inspiring,” recalled Aaron Bludorn of the moment he stepped onto the sound stage of Netflix The Final Table. “It was one of those moments when you look around and think, Whoa.” Bludorn, normally at the helm of the Michelin-starred Café Boulud in New York City, found himself in Los Angeles, surrounded by lights, cameras, and a whole lot of action. “We had no idea what we were walking into, I think they wanted to see our shock and awe!”

If you haven’t yet seen The Final Table, you’re missing out on what is first a feast for the eyes. The stage is over the top beautiful, and as Aaron described working in it, “It was really really incredible! We had every piece of equipment we could want or dream of. The pantry was amazing, and it was really cool how they built the stations to work well for us.”

The thing I like most about The Final Table is that the competition feels genuine. Yes, it’s Hollywood, so you know some things are staged, but there’s no personal drama going on here, no filming everyone in a big house together. It’s straight-up competition at its highest and best, and that’s what attracted Aaron – and his boss Daniel Boulud – from the beginning. “Chef was super adamant about me following this, he thought it was a great opportunity, not only for me but for the restaurant. This being the caliber that it was, it was definitely a chance to put what we’re doing here at Café Boulud out there on an international level.”

While Aaron has judged quite a number of competitions – off camera – for organizations such as Ment’or BKB and C-CAP, he’s never competed. I’ve seen him judging, he’s meticulous, conscientious and fair, but I didn’t know what he’d be like as a competitor, so I was quite excited to see him on The Final Table. I asked if he’d been bitten by the competition bug. He laughed, “A little bit, but, I mean, I didn’t get bit by the TV bug!”

He explained why, when so many chefs would love to be on TV, he was quite happy going back to his kitchen at Café Boulud. “It was long days, a lot of sitting around.  Half of the first episode took us twenty-one hours to film because it was the first time they were filming the show, a whole new crew, they needed to figure out how everything worked, and it was such a crushing feeling for us as a team to have to come back and cook the next day because Graham and I were in the bottom three.”

What Aaron refers to is that in each episode of The Final Table three teams land at the bottom, and it’s those three who must cook again for the real heavy-hitting judges, the Michelin-star, World’s Fifty Best honoree chefs who were brought to LA from all over the world: Clare Smyth (Core by Clare Smyth), Grant Achatz (Alinea), Anne-Sophie Pic (The Restaurant), Carlo Cracco (Cracco), Enrique Olvera (Pujol), Andoni Aduriz (Mugaritz), Helena Rizzo (Maní), Vineet Bhatia, and Yoshihiro Narisawa (Narisawa).

Bludorn and Campbell didn’t fare well a few times. Being familiar with his stellar cooking here in NYC, I was surprised (and on the edge of my seat!). But, there was a positive side to this down-turn of events: getting to cook for the some of the world’s most prominant chefs.

To be honest, we actually realized we enjoyed being at the bottom because we got to cook for the really amazing chefs. I mean, of course it was nerve-racking because we could be off the show, but it was fun because we didn’t actually know who was the chef or the secret ingredient. We really found out last minute, they really wanted to see what was our reaction on camera! ~ Aaron Bludorn

During our interview, what Aaron focused on most wasn’t any cut-throat side of the competition, it was the comradery among the chefs and the take-away of the entire experience. “We all felt that it was about being there together, cooking together, as a part of this incredible project that we all were really excited about and believed in. Because it’s not about the competition as much as it’s about celebrating all our different styles and where each of us come from, and bringing us all together in the spirit of global food.”

When Aaron was asked on camera, at the end of Episode One, how he felt to have moved on to the next episode, he had said he felt “Relief and heartbroken, the hardest part of this competition is to see anybody go home.” So I asked him how, given that they all felt such togetherness, they would handle watching each other get picked off in pairs.

Well you know, we’d go get drinks…we’d celebrate these people who were going home. It was like when you celebrate someone’s last night working at a restaurant, we’d just go out and celebrate them and their last night, every other night! The Friday ones were easier, let’s just put it that way! ~ Aaron Bludorn

Now that The Final Table is a wrap, and all the chefs have gone home to their countries and kitchens, Aaron told me the closeness continues. “We’re all on a WhatsApp chat, and it’s funny to see how it just goes on twenty-four hours, because we’re literally all over the world, we cover each time zone! The other cool thing is that I’ve got to invite some of them to come cook here with me, Amninder Sandhu and Esdras Ochoa have both cooked at Café Boulud, they got to meet Daniel and become part of our team for a few days. It’s such a great experience, I look forward to a lot more of that to come.”

For Aaron, and as he told me, for all the chefs who competed on The Final Table, they didn’t walk away without becoming friends and mentors. Each of them relished The Final Table experience, no chef was “demonized” or made “the one to beat,” and it wasn’t a drama-driven popularity contest. “I was really pleased with the entire experience,” emphasized Aaron at the end of our conversation. “It taught me a lot, and it’s something I’ll keep with me through my entire career.”

Loved you article on Aaron. I too so enjoyed watching the show and seeing the chef’s cook. I only wished that I could have been a judge and tasted the food!!