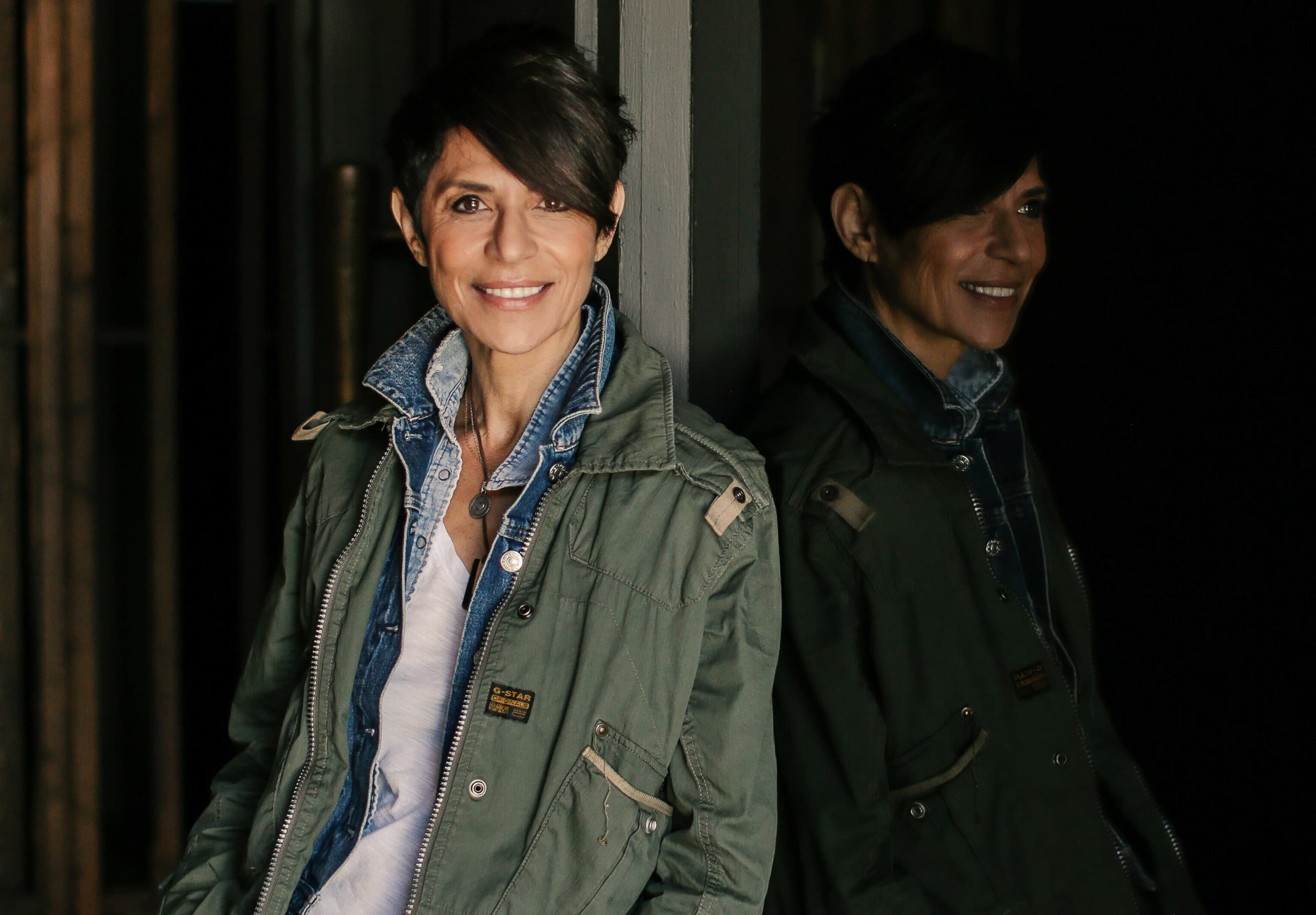 ‘You should just shut up and cook.’ Dominique Crenn told me people have said this to her regarding her politics and activism. She also confessed that her reply to this is usually, “No. You shut up!” In my candid conversation with Crenn we talked about why she’s so intrepidly vocal, so boldly political, and one of the most influential activists of today.

“I’m a human,” she began, “and I get very disturbed by some things that are going on in the world, and very touched by a lot of things happening. I can’t be silent. That would be crazy to be complicit and silent.”

America’s first female Michelin 3-star chef, Dominique Crenn has risen to a level of stardom that makes her a huge target, yet rather than ditching the controversy and enjoying the ride, she’s done the complete opposite. “When you become a ‘celebrity chef’ it’s not about feeding your own ego and becoming more famous,” she shared. “If you get a platform, this incredible gift, you have to use it in a good way. You have to give a voice to people who don’t have a voice.”

Crenn decidedly uses her platform for this purpose. Her more than a quarter-million Instagram followers see this every day. When she was diagnosed with breast cancer and announced it publicly, her post wasn’t just about her individual battle. She wrote, “Beautiful friends, I want to share with you that this last week I was diagnosed with breast cancer. I feel both scared and humbled and yet not alone. One in EIGHT women have breast cancer. I am neither alone nor unique… For all the women who have been on this journey before me and now with me, my heart is with you.”

One gets the sense that Dominique feels stronger when she shares both her strength and her fears with others. Rather than letting her fame set her apart – or worse, above – she is constantly reaching out to bring people together. She told me that she feels “we all need to be connected as people, humanity is the core of a society, so if there is no humanity, there is no more society.”

We see more and more today that chefs are speaking out and using their celebrity as a force for good in the world. Even then, Crenn is exceptionally vocal, so I asked her what she thinks makes her this way. “I was lucky enough to have been adopted when I was young by people like my dad who was a politician and an artist. My dad was very much an advocate for humanity and to give voice to people who didn’t have a voice. He always taught me that no matter where you will be in life you have to always remember that you are a human, and you always have to take care of others if you have the ability to do so.”

I had to ask Dominique if she’d ever considered entering politics herself, perhaps one day when she’s retired from restaurants. She exuberantly replied, “I would love to! I mean, I’m totally an immigrant here, but still some people say I should do that, be in politics. But I don’t know. I just want to speak up. It’s not about being in the limelight, it’s about people hearing my voice and if they can do something good with that, then it’s great, it’s amazing!”

Although Crenn isn’t sure about running for public office, she had a lot to say about people who do.

“Looking at America right now, it’s not about parties, it’s about having someone in the Oval Office who needs to be decent, needs to have good ideas for the whole country, not one-sided ideas. If you want to vote for someone, find someone who has ideas about humanity and about the people, not about themselves or just about one or the other side. That’s how we’re going to evolve.”

“It’s the same thing my dad used to tell me about politics, you can’t be all the way on one side or the other, you have to be balanced in the way you think about things. Yes, sometimes you can have ‘left’ ideas or ‘right’ ideas or more conservative ideas, but you always have to strive to balance your thinking.”

While her political views seem to land left of center, she told me she always tries to listen to the views of people she may not agree with. It may not always come across that way, I’ve seen her in heated disagreement with others, but when she’s talking about issues fueled by a fiery passion, sometimes her soft-spoken voice bellows over her opponents. When this has happened, it seems as if she’s feeling frustrated by the misunderstanding or the extremism of others. I shared my feeling with her and she replied, “You’re right! I am! Extremism is a very scary thing. When you have extremism on any issue it’s really scary how a person can think.”

When I asked Dominique if she really doesn’t worry, even just a tiny bit, about being so political, if she’s ever thought it could hurt her career or cost her customers, she paused in thought, then replied. “If I can make someone think differently because of something I say, to change their view because of something I say, I think that’s a great thing. And if you don’t want to come to my restaurant because of the things I say, I don’t really care. I’m doing ok!” Then she laughed, boisterously and defiantly. “I’m not going to change myself! Now, obviously, I’ve been really lucky because people like the things I’m doing in my restaurants, but still, I feel I have to take that risk. Otherwise we’re not going to change anything.”

There will always be some who think celebrities in any industry shouldn’t get political, whether Hollywood stars, Broadway stars, or celebrity chefs, but this is a ridiculous notion, as it’s rather a fact than humans are political animals. One’s celebrity – or lack thereof – doesn’t negate our right to free speech. Moreover, the issues facing the culinary and hospitality industry impact the world at large.

Crenn agrees. “Even food is political. We have so much responsibility as chefs and others in this industry. We all have a real responsibility here, a responsibility for the farmers, for where the food is coming from, and climate change, and the quality of life for the people who work in all these areas of food and restaurants.”

Running three restaurants in the most expensive city in America can also get political, when you consider that rents are insanely high both for her business and for her team trying to afford a home. Crenn remarked, “It’s crazy. This is a very hard industry, and it’s an industry that’s being overlooked by the local government. Nobody seems to care about the restaurants, about our people. I want to get more political here, with the Mayor and even the Governor. The number one industry is hospitality, including the farmers, and we’re not being supported by the local government. Bringing all this money and business from the tech industry is great, but at the end it’s killing the city.”

The challenges facing the industry and its people are not being adequately addressed politically, and in San Francisco this is especially untenable. “Why doesn’t the government say ‘You want to open a restaurant because food is very important, we’re going to help you!’? After all, San Francisco is an amazing food city and people come here for the food. The city could help us, it could give us credit and tax breaks too, all of that. But nothing like this happens. Nothing.”

When we talked about the issues she’s involved in, she had to laugh about the fact that she is “kind of all over the place on issues!” She dedicates her energy to children, climate change, humanitarian causes, working conditions and wages, and now, she told me she’s “getting involved with some issues in Africa.”

Dominique’s ability to positively influence others was most recently demonstrated by her Wake Up! #incrennible campaign on Instagram, where she issued a call for people in the industry to post one thing they’re doing to combat the climate crisis. Chefs and industry professionals from all backgrounds rallied at the call.

Crenn clearly can’t be silenced, and this is a blessing, for herself and for humanity. Though often controversial, she is honest, thoughtful and inspirational, something that can seem lacking in the world today. Dominique passionately believes we all have a responsibility to push boundaries in pursuit of a better world, and I could not agree more. “I think being an activist should never be a burden. It should be a part of who you are as a human being. As humans we have to be activists. We have to. You can’t just be doing your own thing, you can’t just be selfish and not think about others.”