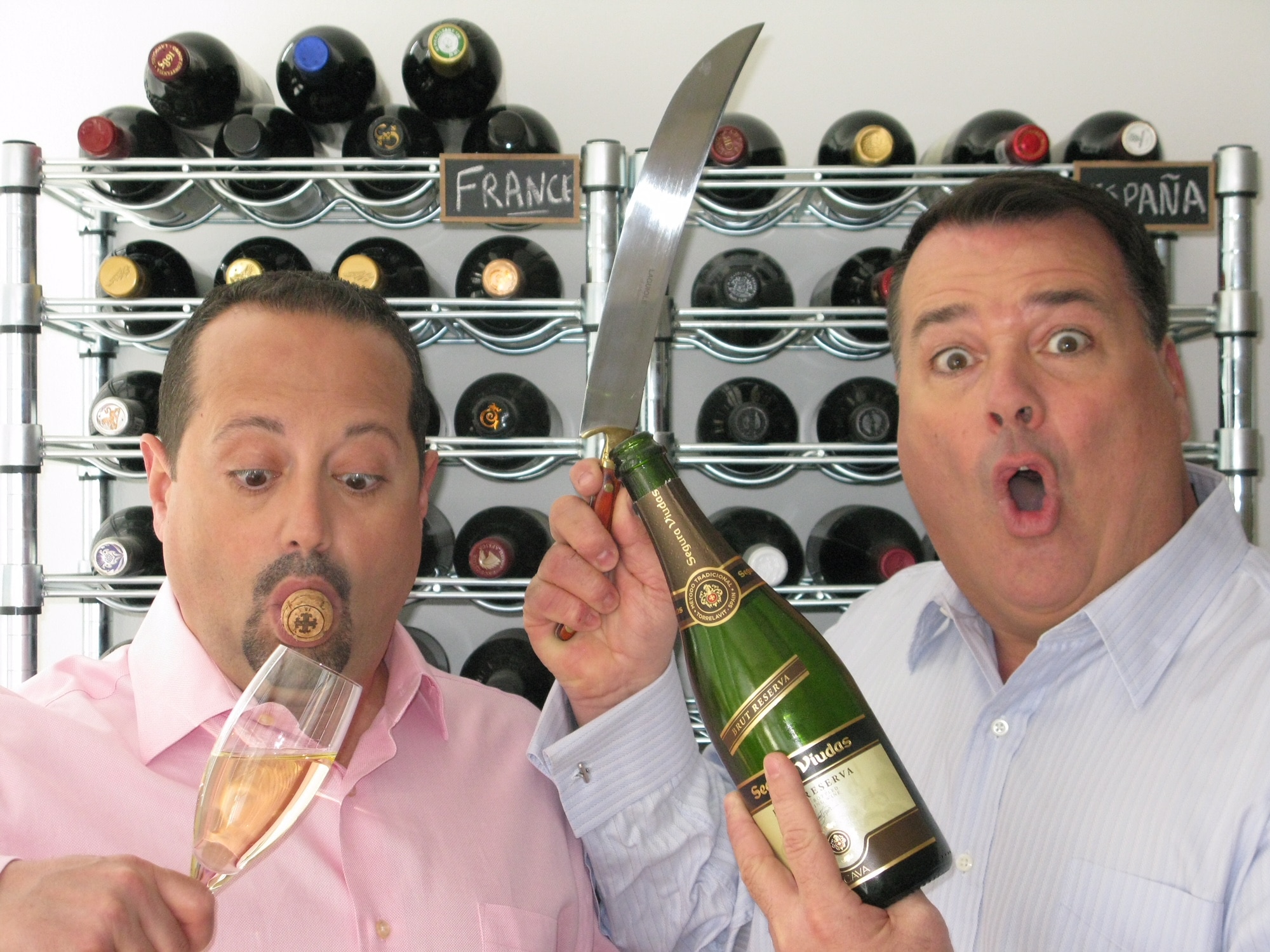 Holding the thick, leather bound wine list slightly aloft, Jeff pointed to three comparably priced wines, all in the $100 range, situated near the top of a page labeled White Burgundy and stated, “We’re thinking of one of these three with our first course. I’m not familiar with all the producers, so out of these choices, which would you recommend?”

Without batting an eye and with no trace of shame, the foppish young sommelier took the wine list from Jeff’s hand and slid his forefinger straight down the page to a $400 wine, while simultaneously announcing, “Those are very good choices sir, but I’d like to recommend this one.”

A good friend was taking us to lunch at one of Manhattan’s top restaurants as a treat for our birthdays, so Jeff deflected the suggestion by letting it be known that we were guests of the lady and wanted to be considerate of her purse. When our wine steward began to explain why his choice was a superior wine, without ever stating the name, appellation, vintage, or what made it so much better, I impatiently cut him off, asking, “Are you trying to tell us that there are wines on your list selling for around $100 that you can’t, in good conscience, recommend? Don’t you think that may be a problem? Should we speak with the beverage director about that?”

“Oh no sir,” he replied, “That won’t be necessary. I think you’ve made a good choice with this one,” as his hand glided back up the page, “so I’ll get glasses and retrieve the bottle.”

One bottle and a course or so down the road and we were ready for more wine, only this time we chose one without seeking consultation. We motioned our wine server over and asked for a specific wine within our original $100 price bracket.  Astonishingly, again his finger swiftly flew down the page, this time to a $500 bottle. Incensed, Jeff did something he usually never does, he pulled a business card out of his breast pocket, handed it to the offending party and said, “Do me a favor, go into the kitchen and Google us. Just do it—and bring us the bottle of wine we asked for.”

Sheepishly returning to the table a few minutes later, after learning that we are well-credentialed professional wine writers, our sommelier apologized. “Gentleman, I am so sorry. I didn’t realize.” Quickly changing topics, he asked if he could clear our first set of glasses before placing down clean ones.

Pointing around the room at diners who, unlike us, were in all likelihood neither wine writers nor regulars, I shot back, “Sure, you’re sorry to us. But are you sorry to a single one of them? Or doesn’t it matter, because they don’t work in the business or they’re never coming back?”

We wish we could say this is an isolated story, but unfortunately it’s not. We’ve received a contemptuous eye roll for our wine choice at another New York City eatery, this one a temple of French haute cuisine, where we had the nerve to order a $110 bottle of Rioja. Apparently while the specials were being rattled off we had missed the instructions to head straight to the vintage First Growth Bordeaux page on the list. More recently, when we inquired of a neighbor how her 25th anniversary dinner at one of the city’s best restaurants had been, she spouted, “It was horrible—I’m never going back there again, and I will tell everyone I know.”

Inquiring as to what had gone awry, we learned that her husband had put himself in the hands of the sommelier, who opened a $375 bottle of wine without divulging the price until the check was dropped.

Before delving further into the topic of upselling wine, we have to say that we have great respect for the hardworking people who log long hours on restaurant floors, bringing their knowledge, experience and caring to each and every patron that avails themselves of their services. We have many friends who are professional sommeliers and beverage directors, and we know that many somms earn their livings almost entirely in tips, and that by increasing the amount spent on wine they’re making sure they can continue to pay their rent and put food on the table. The vast majority of these professionals treat their patrons with respect and deserve the same in return.

Most of the upsell advice offered in articles all over the internet is both logical and ethical, such as, “Putting big wine glasses on the table sets an air of expectation. People buy more expensive wine—the glasses expect it,” or “Don’t put a dollar sign in front of the prices. Research suggests that the lack of a dollar sign makes customers more likely to buy a more expensive wine, as the notion of money (via the dollar sign) is not there to visually scare them off.” Advice in this vein makes a lot of sense, and it doesn’t employ intimidation in order to make a customer –who may be insecure in their wine knowledge– buy something they don’t want, or worse, can’t afford.

Upsell advice on trade sites also recommends making a geographical link, i.e., “If you enjoyed that wine from this region, may I suggest another bottle?” ratcheting the price up a bit, or doing the same while recommending a second version of the same variety. We’re okay with this, and would like to point out that the gentleman who attempted to trade us up to a wine that cost four times more than our original inquiry didn’t employ these or any other techniques. He didn’t ask us any questions about our choices, such as, “Are you set on a Burgundy?” or “What is it you like about that style of wine?” Neither did he mention the relative youth or broad appellations of the wines on our short list, followed by a suggestion to enjoy the complexity of an older vintage or a Premier Cru.

Let’s face it; many extremely successful people who are fully in command of all areas of their life have no idea how to order wine at a restaurant. Hand a Wall Street exec a wine list in front of his colleagues and he’s suddenly brought back to the schoolyard in second grade, wondering which way to jump as the dodge ball careens towards his midsection. The role of the sommelier, then, is not to act as a schoolyard bully but as a friend or trusted teacher, guiding the diner to a wine choice that will make everyone happy.

A breath of fresh air in the world of wine is a new breed of sommeliers who don’t even care for the title.

A fine example is Evan Clagnaz, a well-respected sommelier in New York City. He told us that when he approaches a table and is asked if he is the sommelier, his usual reply is, “No, I’m one of the wine guys here. I’m here to help you with the wine.” When we told him our story of the attempted upsell, a look of anger flashed across his face as he said, “If someone working for me went from $100 to $400, I’d be furious.”

So we asked him how he steers the conversation when trying to learn if diners have a specific wine budget. “I ask guests, ‘Where are we comfortable?’ or ‘Where would we like to be?’ If a client says they want to spend $100, I will show them an $85 wine and a $105 wine, and then dangle a $135 wine to see what the client wants and what they want to spend. Most important, I will show them wines that I love to drink myself.”

Clagnaz is also aware that good wine service can shape clients’ attitude toward the entire dining experience and that it will affect repeat business. In other words, he knows that even if he is successful at selling an expensive bottle to clients who wanted to spend less, he could potentially turn them off and lose them as customers.

“I would rather make people happy the first time so that they come back over and over again.” — Evan Clagnaz

Evan Clagnaz’s reaction is not unique among his peers. Upon hearing about our experience at a restaurant whose name we will not mention, all of the sommeliers we know express anger and surprise and say, “that guy shouldn’t even be working in the business.” Friends who don’t t work in hospitality usually aren’t surprised at all, and often share a personal anecdote of being intimated into buying expensive wine.

Hospitality is defined as the friendly reception and treatment of guests and strangers, and its synonyms include warmth, geniality, cordiality and friendliness. Betraying the guest’s trust by compelling him or her to purchase a bottle of wine that’s beyond their comfort zone is the antithesis of the meaning of the word.  We’ve had so many positive dining experiences and only a handful of negative ones, but we think it’s important to draw attention to the “art” of the upsell.

The best way to combat this practice, in our opinion, is to announce our displeasure when upselling is practiced on us, and to call out bad behavior. As writers we can continue to empower the public so that they have enough confidence in their wine choices to hold firm against intimidation in a restaurant setting. And as educators and industry professionals we can exhort our colleagues who work the floor to keep an eye out for transgressors among their ranks and discourage the practice among peers.  Remember, even the best wine in the world will leave a bad taste in a client’s mouth if they feel they’ve overpaid or were bullied into ordering it.

Mike DeSimone and Jeff Jenssen are co-authors of the ground-breaking books “Wines of California” and “Wines of the Southern Hemisphere,” which won the Gourmand International Award for Best Wine Book in 2012. Known as The World Wine Guys, their latest release is “Red Wine: The Comprehensive Guide to the 50 Essential Varieties & Styles.”