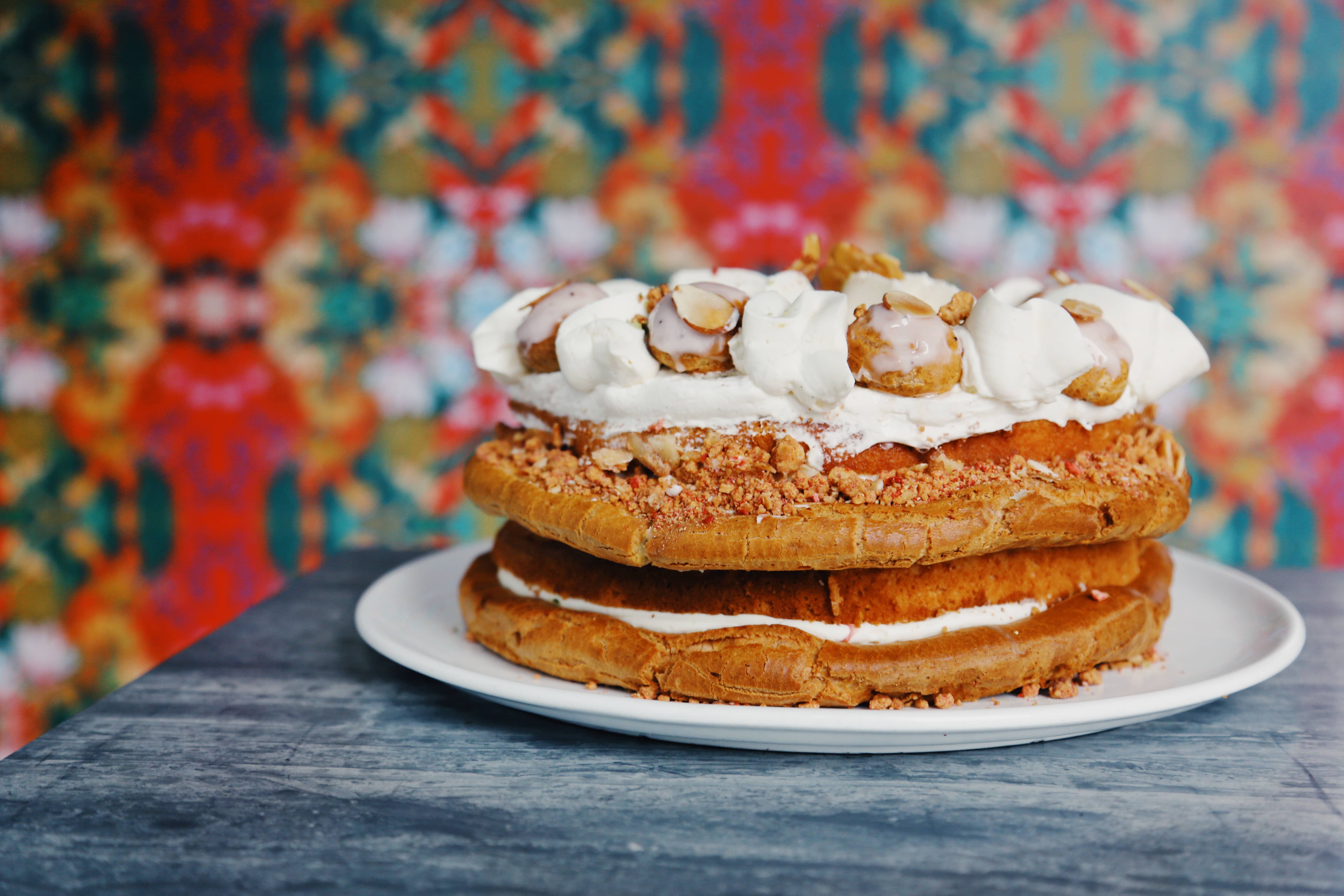 Pastry Chef Pichet Ong can see the cherry blossoms blooming from a kitchen window in The LINE DC Hotel while he works, giving him both a beautiful view and inspiration. “I never imagined cherry blossom was an actual flavor,” mused James Beard finalist Pichet Ong in an interview with CulEpi. “I never lived in a city with a Cherry Blossom Festival, so it’s really nice to get to explore this unique flavor here in Washington DC.”

Since moving to DC from NYC four years ago to work at two of the hotel’s restaurants, Brothers and Sisters and Spoken English, Pichet has only experienced the city’s iconic cherry blossom trees in full bloom once. “It’s always a surprise when it happens, and either I was out of town or too busy to go out and enjoy them!”

There’s no springtime quite like DC’s, when over 3,000 Japanese cherry blossom trees, hitting their peak bloom this week, create such a beautiful burst of pastel pink and white that tens of thousands of spectators crowd The Mall and cruise the Tidal Basin to enjoy them. The LINE DC Hotel and its restaurants celebrate this special time by creating themed menus and desserts, and Ong has a cake at Brothers and Sisters that’s sure to impress.

“We’re making a choux cake this year. It’s almost like an éclair but we make the layers into a cake. The pastry cream will be cherry blossom flavor,” Ong explained of his Yoyogi cake.

And how exactly do you extract the flavor from the flower?  Pichet explained, “You can purchase cherry blossom extract from Japan. It’s a little bit sour and it’s subtle. But we use imported leaves and flowers from Japan to make the pastry cream. We use the leaves mostly, and they have an earthy, almost vegetable flavor. For the pink color we use the petals of the blossoms.”

Ong got the idea to do a cakes-focused menu at the hotel and restaurants from Erik Bruner-Yang, Executive Chef of Brothers and Sisters, because cake can be readily served all day and night. “I’m not known for that kind of stuff but it’s actually great,” said Ong. “The idea that you can have cake anytime is great!”

Cherry blossom cake included, the pastry chef is known for his fantastic desserts of all kinds and continues to receive more attention for them. Though Ong has never received the Award, he has been nominated for James Beard Awards multiple times, the last being Outstanding Pastry Chef in 2009, while he was working in New York City. Ten years later, here in DC, he’s a 2019 finalist.

Ong is understandably excited to make the final five and to have his skills recognized. “It’s great to be relevant still,” he laughed in appreciation. “You have to keep things on the up. I wanted to leave New York for a while so I came down to DC to give it a chance!”

What a great decision that was, for the food scene in DC provides plenty of inspiration and variety. As Ong explained, “I love the DC food scene. In a way there’s more options. The different ethnic varieties are represented better here, I think. The representation of different countries’ regional cuisines is great. There’s not just Thai restaurants, there’s restaurants from different regions of Thailand.”

Being a much smaller city than New York, DC only has room to accommodate so many great restaurants, but that can be a good thing, “especially for someone like me,” said Pichet, “who just wants to have their favorite places to go back to again and again.”

Pichet Ong’s desserts have helped make The LINE DC’s restaurants some of those go-to places for many others in the city, and his work here has put him back on the James Beard list of finalists. Whatever happens with the award, hopefully this year he can at least find time to take a leisurely stroll down the Tidal Basin and enjoy the cherry blossoms blooming in the trees, and not just in his cake!