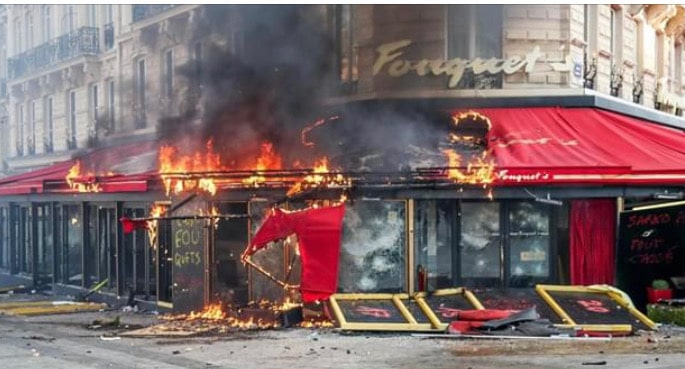 As Paris braces for another Saturday of Yellow Vest demonstrations, we spoke with French Chef Pierre Landet about the destruction of restaurant Fouquet on the Champs-Élysées, and how the French hospitality community feels both heartbroken and angry about the escalating violence.

“It’s awful!” exclaimed Pierre Landet, Executive Chef at Felix in New York’s Tribeca neighborhood. “I don’t understand anymore the legitimacy of these demonstrations. They wanted to burn Fouquet because of the rich people who eat there, but they don’t think of the people who work so hard there, and they aren’t rich! I mean they’re hurting people like dishwashers who work hard to make a living, just because it’s somewhere rich people go to eat?”

Chef Landet had just returned from Paris a few days before the Yellow Vests set Fouquet afire, and he’s had friends who have worked there over the years as well. He spoke not just of the Fouquet fire, but of the closing of shops out of fear caused by the Yellow Vests.

“All the little businesses they’re not making money, it’s awful, on the weekends there’s nothing open because they’re afraid. Things are already difficult for these small businesses. People all go to Amazon to buy things so these few shops left are already struggling, and now they have to worry about this? The people there are working hard, it’s not the rich people the Yellow Vests are hurting by closing these businesses, it’s the working people.”

Landet expressed the irony of Yellow Vest workers “having weekends off when restaurant people don’t.” He noted, “We actually work more hours in the restaurant business than these people work in their jobs. They seem to get Saturdays and Sundays off to go destroy everything. I’d like to see how they would feel if protesters went and destroyed their jobs.”

It’s a shame what’s happening in Paris every Saturday now. This destruction really has to stop. ~ Florian Bellanger

While at the same time recognizing that there can be legitimate forms of social protest, Pierre expressed dismay at the purpose of this level of destruction.  “They have to decide what they’re protesting for. Is it just to destroy something or are they asking for something like a better wage or a better life? France is a democracy, we can vote, we don’t have to have this kind of violence.”

As well as speaking with Chef Landet, CulEpi Editor-in-Chief Regina Varolli communicated with Pastry Chef Florian Bellanger of MadMac Macaron, who expressed his frustration as well. “It’s a shame what’s happening in Paris every Saturday now. This destruction really has to stop.” Bellanger noted that Fouquet employed three-hundred people.

Varolli told the team here how the burning of Fouquet upset her as well. “I can’t imagine how terrible this must be for the people at Fouquet. My mom owned a fine-dining restaurant in Beverly Hills but we didn’t grow up super rich. Yeah, rich people ate at my mom’s restaurant, but if someone had torched it to supposedly make a political statement, it’s my family – a single mom raising three girls – and all her employees that would’ve suffered, not our rich clientelle, they’d have just gone to eat somewhere else.”

Both chefs Landet and Belanger, as well as the French restaurant community in New York City, are distraught over the situation in Paris and the suffering of the people at Fouquet.

“All the French community in New York City, we don’t understand, it upsets all of us that this happened. We feel awful for the people who work at Fouquet, who now can’t work, and we hope the restaurant can get back up and running again very soon.”