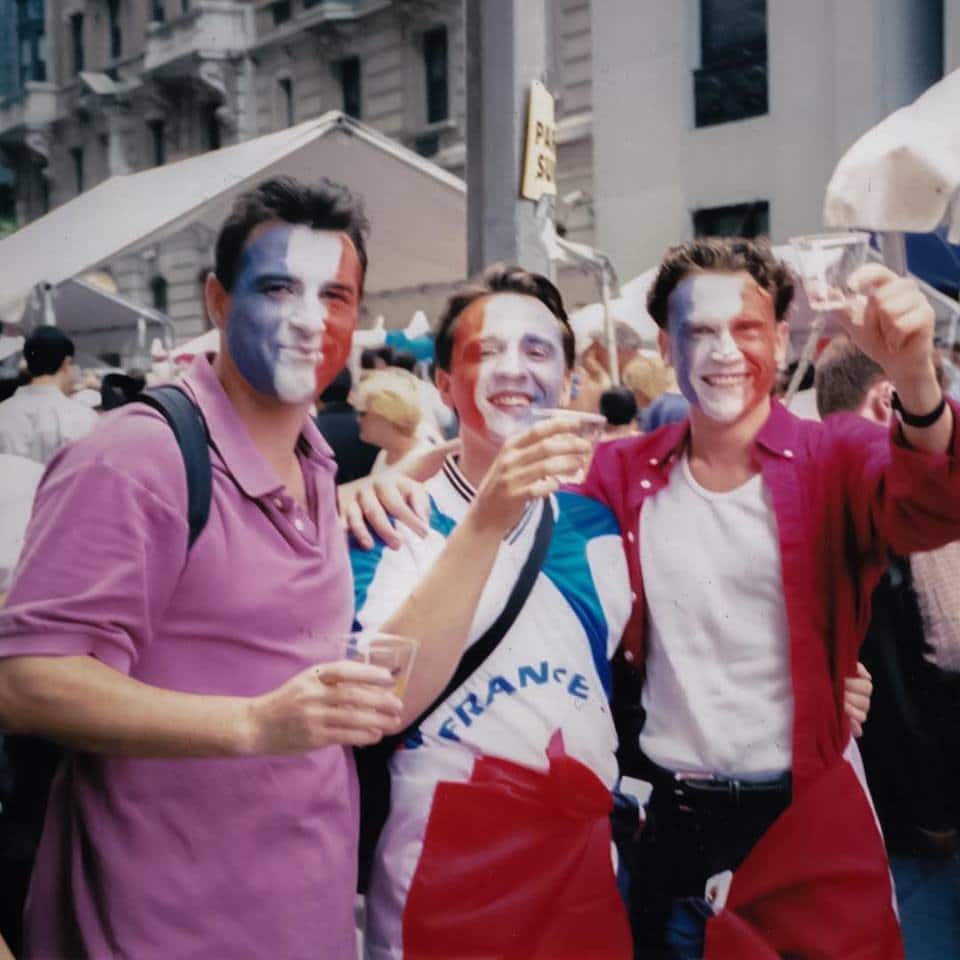 With France in the FIFA World Cup Final, and with so many French friends and colleagues in the culinary industry, I just had to reach out and ask some of them how they’re feeling in the lead-up to the game!

Eddy Leroux, Chef de Cuisine at the Michelin 2-star restaurant Daniel, will be watching the match on Sunday on the packed streets outside the French Institute Alliance Francaise on New York’s Upper East Side, where this year, like twenty years ago when France won the World Cup in ’98, the final lands on the same day that the French celebrate Bastille Day.

Leroux told me, “Soccer has been part of my life from my childhood to my adulthood, a World Cup brings a nation together and winning a World Cup brings positivity for many months to follow!”  Incredibly, twenty years ago, Eddy actually met his wife Fatima at the FIAF street party for the World Cup Final and Bastille Day.

I can’t believe it’s been 20 years and we are on the same configuration this Sunday, we are celebrating Bastille Day in New York at the same spot!  Let’s cross our fingers! ~ Eddy Leroux

Damien Herrgott and Jessica Massias of Bosie Tea Parlor and Bosie Bakery are both optimistic for the final. Executive Pastry Chef and Partner Damien Herrgott said, “I’m excited about the final more than I’m nervous because we have a great team this year, big time!”

Damien will be wearing the team jersey “just one star on it, but we’ll have two soon!” and watching with friends, though he prefers a location that’s “not too crazy.”  Which means he won’t be glued to the big screens outside the Alliance Francaise like Leroux. He did say however, “That’s where everyone will go if France wins, we don’t have the French equivalent of a Little Italy in New York City, so we’ll all end up at Alliance Francaise if we win!”  Then he paused and added, “We’re going to win it! I mean, I hope we do!”

Pastry Chef Jessica Massias, also of Bosie Tea Parlor, told me she’s “positive we will win!  We have a great team, young and dynamic!” Jessica plans to watch the FIFA Final with her Spanish boyfriend, though she hasn’t been chiding him about Spain’s loss, “Football is much too serious for him, so I don’t tease!”  Massias also has a team jersey, she got one with her name on the back.

Florian Bellanger of MadMac Macaron and The Food Network’s Cupcake Wars, is a huge soccer fan, and he’s super amped for the match tomorrow, when he’ll host a watch party at his home (and hopefully a victory celebration) including a whole roast pig, tons of desserts and of course Champagne.  “I’m really excited about tomorrow, not really nervous – yet – I believe in this team – their way of adapting to any opponent is amazing. Their positive spirit reminds me of the 1998 team who won the cup. If you look closely, these two French teams are so similar, they have the same ‘eye of the tiger’ and they come on the field without any fears.”

Florian had a personal message for this year’s French coach Didier Deschamps, who happened to captain the winning team in ‘98.

Merci Didier Deschamps! You’re an amazing coach, you found the way to build a similar team as when you were captain in ‘98 – no wonder you won the cup back then, I can’t wait for our second star on the Jersey – you’re a true world champion Sir! ~ Florian Bellanger

Garry Larduinat of Wolfgang Puck Catering based in Beverly Hills, California will be watching the final with his wife, “at a bar in Hollywood with a huge screen, a lot of Frenchies, and the best part is: early birds will receive free coffee and croissants! So French!”  A big football fan, Garry will be waving a huge French flag he brought back from his last trip. “I’m really excited and proud, especially because it’s such a young team with so much potential and talent!”

Tempering his enthusiasm a little, Garry gave a nod to the opponents. “Of course I’m a bit nervous, knowing who we are playing. Croatia is a strong team with very good players as well, so we need to be better than them!!  I’m very hopeful for my team and for my country for sure, it is such a great feeling to win a world cup! Last time we won, I was 14 years old!”

While not every Frenchie is a huge soccer fan, seeing Les Blues make the final is quite the game-changer.  Marine Leman of Valrhona Chocolate admitted, “I’m not into soccer and I haven’t watched a single match yet this year, but the fact we are in the final makes me love soccer!! I will definitely be in front of a screen on Sunday with a few of my French friends in NYC, cheering our team!”

Though I’m crushed over the fact that my team, Gli Azzurri, didn’t even qualify this year (sniffle sniffle – no GiGi), France has always been my back-up team. I’m stoked they’ve made it to the final and I wholeheartedly share in the enthusiasm of Frenchies everywhere, and I’ll be cheering alongside the other hopeful guests at Florian’s party tomorrow. This dynamic, quick-thinking, fast-footed team of young players is the best I’ve seen out of France since ’98, so I’m feeling super optimistic too… Allez Les Blues!!