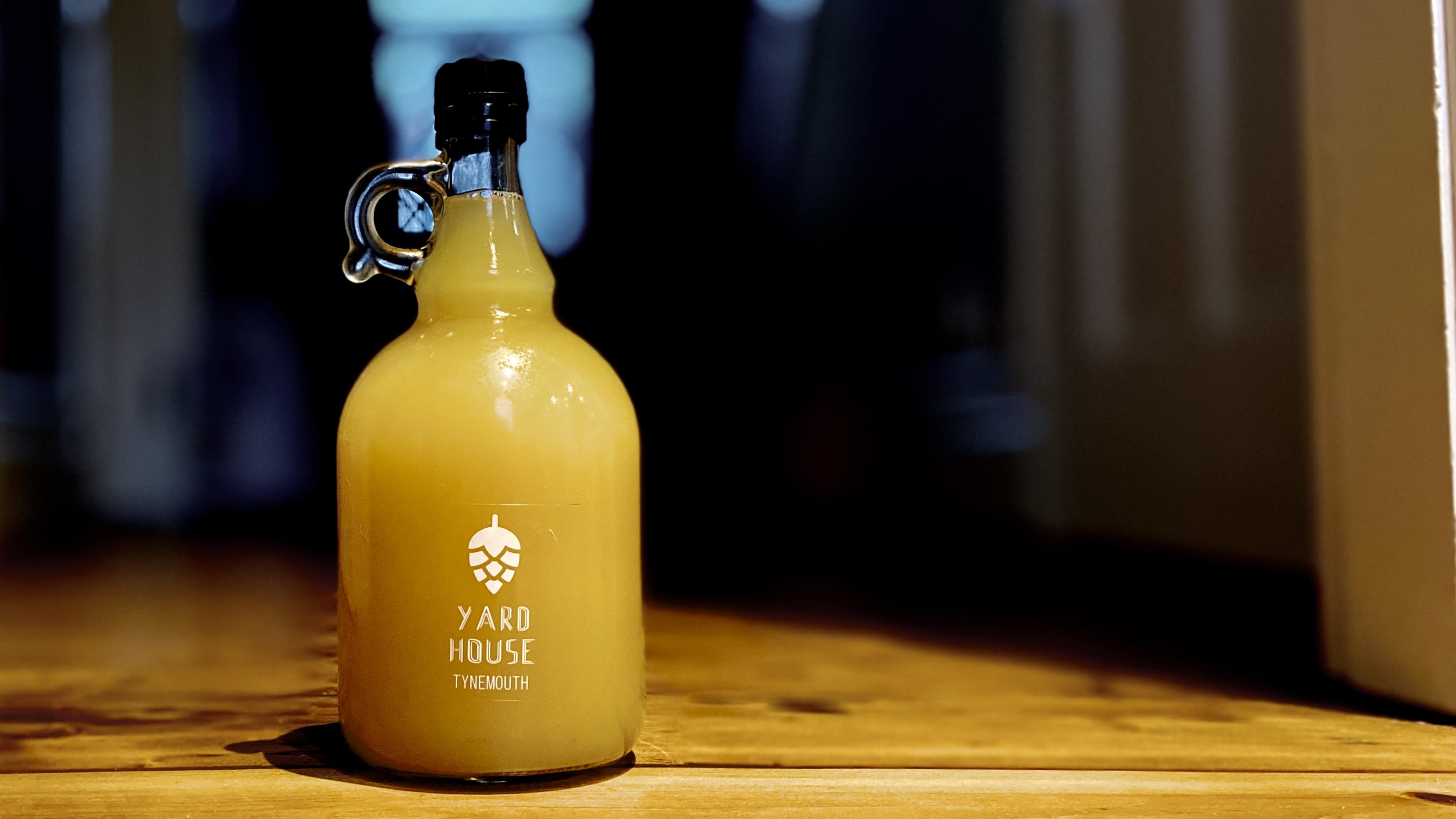 When the first wave of the pandemic hit the UK, pubs were hit hard. They were the first businesses to be closed — shortly ahead of a full lockdown in March 2020 — and amongst the last to open back up in July. Then in January, restrictions reduced pubs to only being allowed to offer takeaway and delivery service for beer and food, which remain in place today. They’re currently waiting to re-open on April 12th.

I work in a small bottle shop and tap room called the Yardhouse in Tynemouth, Northeast England. Though we did sell beer to be consumed on-site and offered tasting evenings, this was always a small part of the business. About 80% of our business is takeaway beer that’s sold in cans and bottles, but primarily in the form of  growler fills.

A growler is a resealable container, usually glass or metal, that’s filled from draft taps of keg or cask beer. The customer drinks it and brings it back to be refilled later. It’s a way to enjoy fresh draft beer at home.

For my bottle shop, when the coronavirus restrictions hit, we didn’t change much. We couldn’t serve beer on site, but, since we’re classified as an “off-licence” (a shop) rather than a pub, we’ve been able to keep the doors open for people to come in and buy beer like they normally would.

That said, we still felt a great responsibility to breweries in our local area. We knew they were facing a lot of hardship, and many had a significant reserve of kegs that needed to be sold.  So we also knew we had to focus on helping those breweries get their stock out in the form of growler fills.

Our customers still wanted to enjoy beer from local craft breweries, and they wanted to support them through the pandemic. We saw a steady stream of new customers looking for takeaway draft beer for the first time come into our shop, and being able to access draft beer allowed them some feeling of normality, in what has been an abnormal year.

Although much of our business escaped unscathed, we still had to adapt to fill the gap in business that came from not being able to offer on-site drinking. So Yardhouse launched a website and began offering a click-and-collect service, along with local and national delivery. These have proved to be very popular, and it’s hard to see us ever not offering these services going forward.

Other businesses have had to adapt a lot more to survive COVID-19. When I put out a call for businesses to reach out and speak to me about how they’ve pivoted during the pandemic, I was overwhelmed with the level of response I received.

One story that stuck out to me was from Nick Holden, who runs the Geese and Fountain pub with his family in the village of Croxton Kerrial in Leicestershire. The Geese and Fountain had always offered growler sales, but it was a small part of their business with generally only about half a dozen fills sold a week. When the pandemic hit, this quickly grew to 30-50 fills a week.

The pub had always offered takeaway bottles and cans, but it lowered its prices to be more competitive. The pub also became a shop selling milk, bread and other household essentials, as Croxton Kerrial is so small it doesn’t have a local shop. Their takeaway meal nights became very popular with the locals, too. While Nick says all these innovations were only generating  around 30% of their normal income, they allowed them to keep in touch with the community and to keep stock moving.

In January 2021, when new government restrictions made on-site sales of alcohol illegal, The Geese and Fountain adapted again and started a Saturday growler club. Customers left empty growlers on their doorstep and Nick delivered freshly filled ones through a contact-free service. Nick explained that around half of the members of the new growler club have never even been to his pub before. If demand is there after restrictions begin to lift, and the pub can open as normal, Nick intends to continue the Saturday growler club.

Dave Hayward of A Hoppy Place in Windsor, a hybrid bottle shop and taproom, says that before the pandemic, his business was about 50/50 on-site and off-site sales, so they were in a position to keep filling growlers like they had before. He also found new customers, and said that a lot of their clientele prefer draft beer to cans or bottles because, “A pint of beer freshly pulled, just had a unique romance. It feels to me a distinctly British love, and one I definitely feel myself too.”

The bigger area of expansion for A Hoppy Place has been through national delivery via online sales. By engaging with online forums and Facebook groups, they carved out a place for themselves in the highly competitive online market. Even during the period when customers were able to come in and drink on the premises, Dave said around 80% of their business was still from online and takeaway sales. Currently, their online national delivery is a bigger source of revenue than local delivery and takeaway put together.

Whilst these revenue streams haven’t been making the business a profit, A Hoppy Place has been breaking even, it’s been keeping its head above water and not building up debt. Dave is cautiously optimistic about the future, because with a steady  online stream of sales, plus a base of loyal local customers (once people can return to the pub), the business should be in good shape for the future.

Many small breweries in the UK have also had to adapt in the face of Covid, since they generally had little direct interaction with customers, and it’s not uncommon for breweries to sell almost entirely through local pubs and beer distributors. James Goodman from Wilderness Brewery, reached out to talk to me about how he’s adapted his business. Though the brewery already had an on-site shop for bottles and cans and rare on-site events, this was a very small part of their income, so when pubs were closed during the first lockdown, the vast majority of their business disappeared.

By using a combination of government COVID-19 grants and crowdfunding, James was able to buy a small canning line to ensure he could offer more canned beer. Wilderness then built a direct link to local customers by offering a click and collect service and local delivery.

Throughout this journey, James had the added complication of his young daughter’s nursery being closed due to COVID-19, so he would take her out on deliveries with him (and try and keep her entertained while he was labeling cans and bottles). James said he intends to continue with this increased local presence, and to do more regular events at the brewery when coronavirus restrictions end.

Though Yardhouse was able to build a business model during the pandemic that has seen us replicate the sales we had before, our business was very tailored towards it. We were very lucky to have an existing customer base of takeaway beer fans, rather than having to build one from scratch.

What all the other businesses said was that moving to takeaway draft beer did not provide them anywhere near the same income as before COVID-19, but that it’s been vital in keeping the lights on. When combined with government financial support, these businesses have weathered the storm, although times have been tough.

Throughout my conversations, everyone emphasized the importance of keeping in touch with customers and making sure they could still enjoy a freshly poured pint of beer. Reminding the local community they’re still there and keeping that connection is crucial, so that when pubs can reopen properly on April 12th, their customers will flock back through their doors.