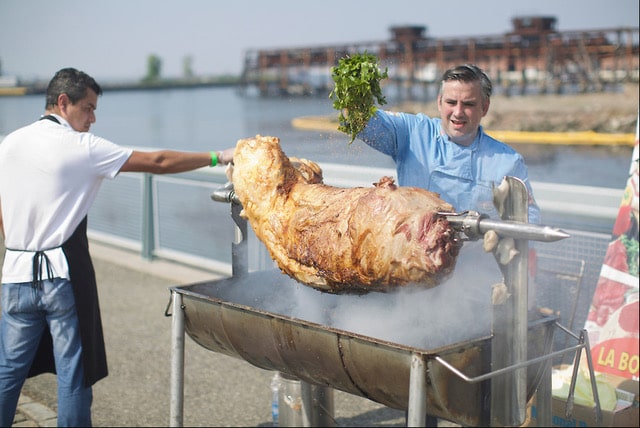 This year marks the 10th annual Pig Island NYC, and to celebrate, the pork-inspired food festival will not only feed the public, but will educate them as well by featuring and highlighting the substantial work that local farmers are doing to sustainably raise their hogs.

The event will be held along the waterfront in Red Hook, Brooklyn on Saturday, September 7th from – The pork fest will include tastings from local, pig-loving butchers, farmers, chefs, restaurants and more, along with a variety of chef competitions, wine, beer, spirits.

Despite meat industry criticisms, many local heritage pig farmers are excelling in terms of sustainability and seem to be more focused than ever on providing their animals with happy homes while remaining dedicated to helping the environment flourish.

Pig farmer Tank Jackson of Holy City Hogs will be one of the main heritage pig providers at Pig Island, and he’ll be bringing a pure-bred Ossabaw Island pig this year. “The Ossabaw pig originally came over with the Spanish conquistadors,” Tank explained. “They’ve been on this land since before it was the United States. So, I’m bringing one of the oldest and tastiest pigs in the world. I call it ‘Carolina Ibérico’ because I raise them extremely similar to the way they raise Iberian hogs. These pigs have been on Ossabaw Island, Georgia for 400-500 years unchanged by man.”

Another hog provider at this year’s event is Rodrigo Duarte of Caseiro e Bom in New Jersey. Rodrigo is the only pig farmer in America certified to raise pure Ibérico pigs and is the defending champion of Pig Island’s ‘Best Whole Hog’ award. “In Portugal, we call our pure Ibéricos, ‘Alentejanos’ for the [Alentejo] region where they are primarily raised,” Rodrigo said. “The Spanish might be better at curing hams, but our pigs are purer bred and provide better, fattier meat. Indeed, no small portion of Spain’s best Jamón Ibérico is actually made from Portuguese Alentejanos.”

I do all I can to give each of my pigs a good life, free from suffering, right until the day I say goodbye. ~ Rodrigo Duarte, Ibérico Pig Farmer

The quality coming from heritage pigs is a direct reflection of the respect these farmers have for their history and for the animals themselves, something that large-scale, modern farming seems to lack.

“Modern farming has no respect for pigs,” Rodrigo argued. “They’re seen as numbers, not animals. But I do all I can to give each of my pigs a good life, free from suffering, right until the day I say goodbye. I’ve put all my soul and effort into this for more than a decade. I want to show people here that something amazing comes when you honor tradition. If you take care of the pig, they are happier and make healthier, richer meat. And that’s better for everybody.”

Jay Fox of Hudson & Charles sources his pigs from Autumn’s Harvest Farm because of the respect that they have not only for the animals they raise, but the role they play in the environment too.

“We chose a single source, grass-fed farm because of the symbiotic relationship between cows, pigs, and chickens,” Jay emphasized. “Tim and Sara Haws at Autumn’s Harvest Farm are healing the land that they farm. They’ve reclaimed farms that were once used for mono-farming, which kills the soil. By reclaiming these farm pets, they’ve brought back native grasses to the land. When native grasses are reintroduced, the whole ecosystem returns, including insects and birds that help pollinate.”

also understands this full-circle connection his hogs have with Mother Earth. “At Holy City Hogs, we food-cycle by using food that’s never been used and would otherwise go to waste. We’re putting it into our pigs instead into the landfill.” This is key, because food waste that rots in landfills contributes to carbon emissions.

“We also name and pet our pigs,” Tank continued. “We like to have a close-knit relationship with our hogs and treat them like pets until the day that they are gone. We use a humane slaughterhouse that uses CO2 so that out pigs literally fall asleep on an elevator. It’s the happiest way to go down. We’re hippie farmers.”

Contrary to some recent criticism suggesting that everyone should stop eating meat altogether, many local, environmentally conscientious farmers are fighting back. They’re educating consumers about their best practices to encourage them to instead, look more closely at where they’re getting their meat.

“Vegetarianism is not the answer to climate change,” Jay strongly believes. “If more people supported small local farms who practice regenerative farming, that would have a positive impact on the climate. Supporting grass-fed and pasture-raised local farms can have an impact if everyone is on board. Eat less meat, but eat well-raised meat from sustainable farms.”

Chef Roxanne Spruance, Food Network Chopped Champion and current judge on the History Channel’s ‘The Butcher,’ seems to agree with Jay and has her own take on this particular criticism against the meat industry.

“It’s ridiculous to think that the entire world is going to become vegan,” Roxanne points out, “that’s just not a practical situation.”

“Our system is so flawed. It’s overwhelming, but there has to be some sort of education and understanding for the consumer,” she continued. “I think people don’t understand that there’s a huge difference between factory farming and independent farmers, and I think that gets muddied. There’s so much that people don’t quite get about this, as opposed to Mike at Flying Pigs or DeBragga’s Heritage pig program Upstate, where they’re raising Gloucestershire Old Spots and rotating pigs through the forest, cutting down on underbrush, which then reduces the risk of forest fires. There are a thousand environmental impacts that radiate from this. It’s like a butterfly effect.”

Roxanne also believes that our main focus should be on supporting local farmers, instead of blaming the entire industry for malpractice. “Meat isn’t bad, a lot of big agriculture practices are bad,” Roxanne explained. “You could say the same thing about corn or the lack of biodiversity with bananas or soybeans. To villainize meat without a true understanding is wild to me.”

She also wants others to recognize the big picture on certain issues and suggests, “a really good example of this is controversial veal. People are like ‘oh, it’s a baby why would you kill it?’ Well, it’s a male dairy cow. They have no role in our dairy agriculture system. This is an animal that we could let grow to full maturity and use more resources or we could do something with it while it’s younger, still on the teat, not using up a ton of resources and have a meat product that everyone can eat.”

No matter what the industry, it’s clear that there is often more to the story than what consumers might see on the surface, and this comes in both good and bad forms. What these local farmers, butchers and chefs are proving is that with hard work, support, care, responsibility and respect, the meat industry has the potential to help the environment thrive, all while giving consumers the delicious pork they crave.