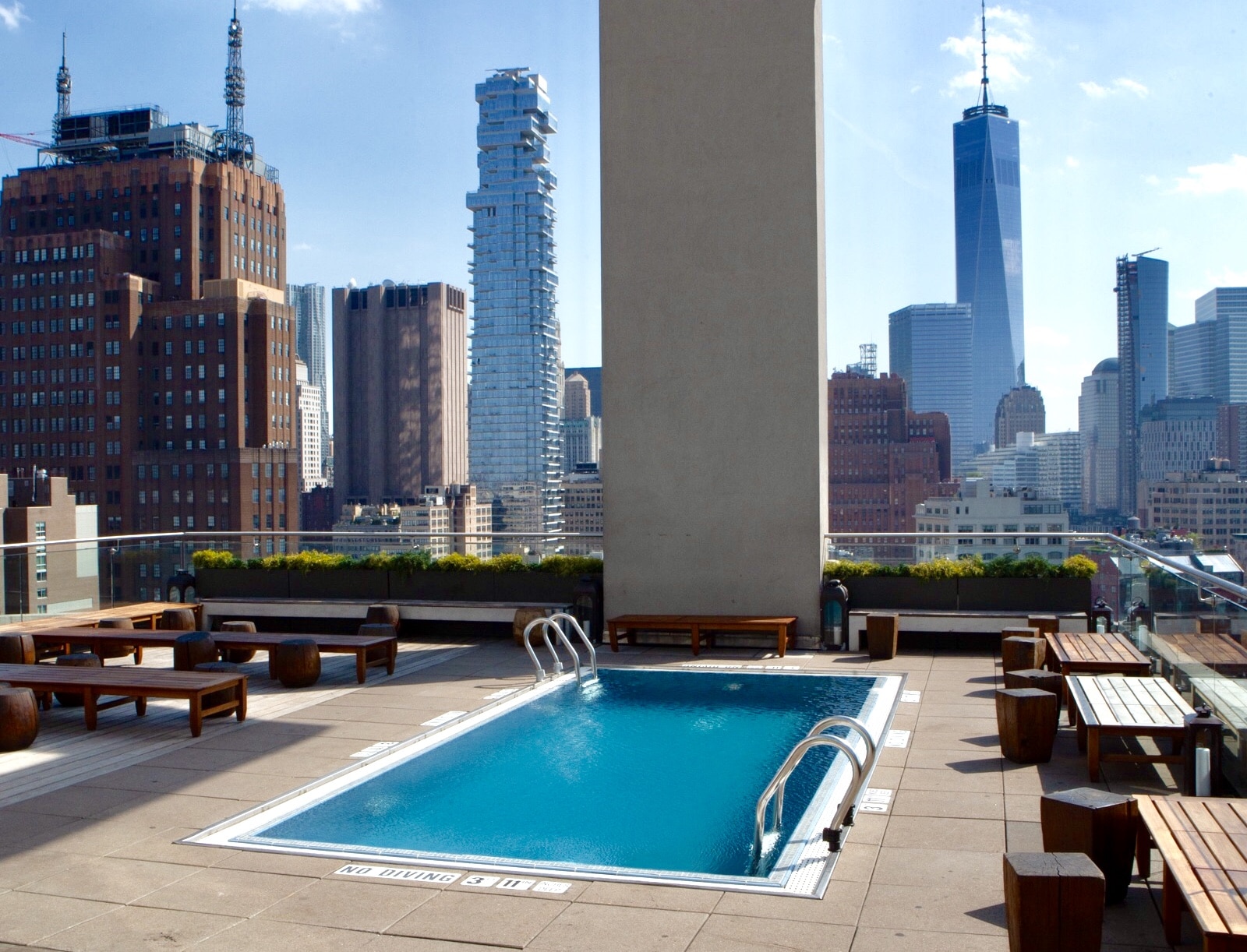 Self-proclaimed Roof Explorer, Leslie Adatto and culinary industry photographer Clay Williams have spent the last year living the high life in New York City, and thanks to their newly released book, 111 Rooftops in New York That You Must Not Miss, now everyone else can too. Just in time for the summer when locals and tourists alike are craving cool outdoor spaces, their new guide full of hand-picked locations includes public access rooftops across NYC ranging from bars, pools, gardens, museums, parks and more. Both Leslie and Clay spoke with CulEpi in a recent interview to share their unique perspective of the city.

Leslie’s passion for rooftops began even before she lived in the city. “Years back,” Leslie explained. “When I would come to NYC, I was always looking up to see what was going on in the city. Then, it occurred to me, how wonderful it would be to look down on the city. But, when I looked for books on it there really weren’t any. I then decided that this would be my thing, because no one was doing it at the time. It turned out to be so much bigger than I ever dreamed, because that’s how New York works, you look for something and it gives you more than you could ever possibly handle.”

Since then, Leslie has become a New Yorker herself, spending more than nine years living in the city and discovering NYC’s best rooftops and ultimately becoming an expert on them. “I started by looking at private people’s rooftops, kind of penthouse rooftops,” she said. “To be perfectly honest, that was a little on the boring side. They’re not used that much and they’re not that varied. Then I started finding out about scientific equipment on rooftops, about farms on rooftops, about yoga classes, ice-skating rinks, 50-meter swimming pools, and bars of course. I realized that there was this entire world on top of New York City that I didn’t know about and if I didn’t know about it and I was so in love with New York City, probably a lot of people didn’t know about it.”

Even for those who think they have the NYC landscape completely figured out, they’ll most likely find exciting, new vantage points right in their own backyard. “It’s really a book for locals who want to get off the beaten track,” Leslie said. “It’s really fun when I watch people, especially native New Yorkers, go through the book and say, ‘Oh yeah, I know that, I know that,’ and then suddenly they’ll get that look on their face, and they’re like, ‘wow, I had no idea that was there!’”

Even Clay, who photographed almost every rooftop in the book admitted, “I’m a lifelong New Yorker and I have to say that I saw a side of the city I had never seen before. It’s an amazing perspective to take in. There were many places around the city that I had just never been, or maybe I’d been to the area, but had never seen it from that perspective. It was amazing going all over the place.”

“And we were all over the place, weren’t we?” Leslie laughed, “We were in every corner.”

“Yeah, from the Bronx to Staten Island,” Clay continued. “There was one shoot we were doing at the Metropolitan Museum of Art rooftop, and that day, the subways were being the subways, and it took me almost two hours to get there. It was just one of those really annoying commutes and all I was thinking on my way was that I just had to get out of this city, it was terrible. Then, we got up to the roof and it was just the most amazing view. There’s Central Park behind you with this view all the way downtown and it was just like, ‘Ok, right, this is why I’m here.’”

“It’s really a romance with New York City, and it makes you fall in love with it again, and again, and again,” Leslie followed. “I believe that looking at the city from a rooftop, even if it’s only a few floors up, is really the most romantic way to look at New York City. You’re a little bit above the noise and the fray and the grit. It’s a really positive way to interact with the city.”

As impressive as the views might be from these heights, both Clay and Leslie sought to capture the full experience of being on these rooftops. “One of the things that was really hard was just not always taking pictures of the view,” Clay said. “The views are gorgeous, but I had to make myself focus on the details of the places and things that made them stand out besides just the perspective. They were all so different.”

With the ever-growing number of new rooftops opening up across NYC, it’s tough to think about a time when these types of spaces weren’t being utilized at all. Leslie explained that although rooftops were popular in the early 1900’s, sometime around the 1920’s they began to go out of fashion as air conditioning started to come into play.

“Now, they’re back because NYC real estate is so expensive and so unbelievably valuable,” Leslie said. “Building managers and developers have gone back to rooftops and realized wow, we’re overlooking this incredibly valuable asset and it’s kind of been rediscovered.”

There’s one rooftop Leslie mentioned that crosses over these two periods of time– The Knickerbocker Hotel in Times Square, originally opened in 1906. “It’s a landmarked hotel, so there’s no neon on it. The rooftop was originally built as an accessible rooftop because in those days, elevators had recently been invented, so you could get up to the high level easily, but air conditioning had not been perfected yet. So, people went up there to see and be seen, have a cooling off cocktail in the summer and go up to promenade on this rooftop.”

This space went out of style with the rest of NYC rooftops, and closed down, but recently, they’ve re-opened the hotel and restored its rooftop space. “It’s really beautiful,” Leslie said. “You’re crossing over the segments of time from when this rooftop was built for the public, to now being used once again.”

As for Leslie’s favorite rooftop, she told me, “It’s hard to say which is the most amazing. The fact that they’re playing soccer on a rooftop in Queens, that’s amazing, right? The fact that they’re growing food on a rooftop in Gowanus, the same way that they can grow food in space, is amazing. But to me, something that’s so huge and remarkable is the 28-acre facility on top of the sewage treatment plant in West Harlem, Hamilton Heights––River Bank State Park. I personally swim in a 50-meter covered pool on that roof top, I skate on a full-size regulation hockey ice rink on that rooftop. The horticulture rooftop is up there. There’s tennis. We’re talking 28 acres! It still just blows my mind. I got an apartment across the street from it because I love it so much!”

If you’re like me and this conversation sparked your curiosity in discovering some of these amazing NYC rooftops, you might want to consider taking on the “111 Challenge” by visiting every rooftop in the book. Although somehow Leslie and Clay managed to do this in well less than a year, Leslie’s advice to summer’s rooftop-seekers is simple, “You better start now!”