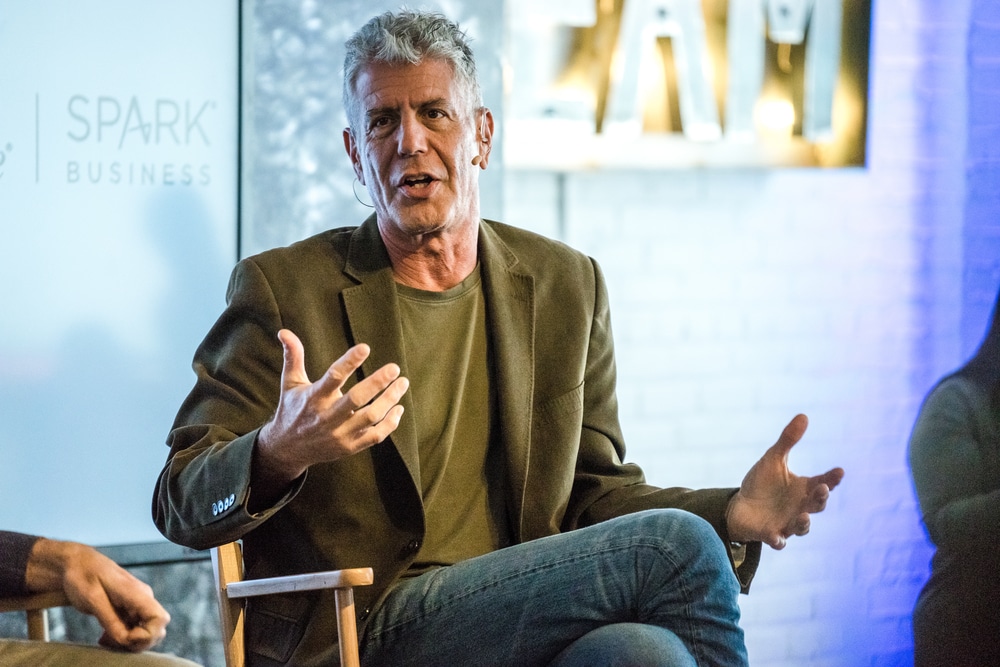 Our industry awoke today to learn of the loss of Anthony Bourdain, a hit so hard, that even those who never had the privilege to know or even to meet him are feeling a deep personal sadness. He had a huge impact on so many lives. He was that inspirational, that personable, that accessible.  In a time when many public figures are not, Anthony Bourdain was real, he was honest, he was openly flawed, and that’s why we loved him.

Over the years I did have the privilege to meet him, he was in person as he was on camera, engaging, funny, intelligent, and unapologetically honest and blunt. We shared a lot of laughs arising from irreverent observations.  Though I never interviewed him, I did interview his friend and very like-minded colleague Andrew Zimmern, whose career path mirrored Bourdain’s.  Both were heroin addicts, both worked themselves ragged in kitchens, both went on to television stardom spawned by adventurous globe-trotting gullets and authentic selves.

In my HuffPost interview with Zimmern, we talked about addiction and suicide, he explained to me how he felt at his lowest point, not in his moment of greatest success, as we all thought Anthony Bourdain was currently enjoying.

I just wanted to kill myself. I thought I was the biggest loser of all time. I couldn’t get my shit together and I really felt hopeless. I’d lost all my family and my friends.  ~  Andrew Zimmern

From there Zimmern finally did reach out to a friend, and that friend responded, that friend got Andrew the help he needed and quite literally saved his life.

I seek out the people who inspire, Andrew Zimmern, Melissa d’Arabian, Grant Achatz, Rodolfo Guzmán… because I hope to touch someone who is fighting their own seemingly insurmountable struggles, and who may be feeling they’re losing the battle.  I hope to show them through the trials of others that they are not alone, that they can overcome.  And yet… still, suicide continues to be a choice for those grappling with deep-rooted depression, anxiety, addiction and loss.  To say it’s heart-breaking seems glib, insufficient, and even empty.

Perhaps it was because Bourdain was so successful, so famous, seemingly so happy and full of lust for life, that we didn’t see this coming.  He “had it all” so why would he do this?  This is what many people will ask themselves as the news spreads and sinks in.  Yet, it seems when a person has fulfilled all their dreams and then some, and still finds themselves in a constant battle with their demons, they’re at greatest risk of not asking for help. The response could well be, What do you have to be so depressed about? You’ve got it all!

Andrew Zimmern and I talked about this, and he told me something I believe strongly myself.

The biggest difference-maker in the world is just sharing what’s going on with another human being. There’s a lot of shame and stigma attached to turning to another human being and telling them what’s really happening, whether you’re a victim of domestic violence, an addict, or going to bed hungry. If we can share the truth with the people who love us, the better off we are.  ~  Andrew Zimmern

I’ve always tried to share my truth, and to be kind to everyone I meet.  As the daughter of a woman who ended up a single mom raising three girls and running a well-known high-end restaurant where she had to greet her guests with a smile no matter how she felt inside, I’m no stranger to secret struggles and demons that don’t die.

A few years back I wrote about the very early death of one of my sisters, who fought a life-long battle with depression and anxiety, and lost that battle. So the news of Anthony Bourdain’s suicide did not make me ask “How?” or “Why?”  It simply once again made me wish that humans were more accepting of the weaknesses in their fellow humans, and a hell of a lot less judgmental.

As a student of Philosophy I read a quote from Nietzsche that I’ve never forgotten, “The thought of suicide is a powerful comfort: it helps one through many a dreadful night.”  Yet, the thought and the action are separated by a deep, dark chasm, and why one human crosses it and another does not, remains a mystery.

To say that Anthony Bourdain will be terribly missed by his family and his friends, to say that Eric Ripert is facing a moment of incomprehensible devastation, are incredible understatements.  Having experienced this kind of loss, I know you never really “get over it and move on.”

As much as I know it doesn’t lessen their pain in this moment, I will nevertheless add my voice to countless others today and say to them: You have my deepest sympathy.  I wish you all the support you need now, and long into the future. Let the people around you help you, for it’s the only way you’ll have the strength to carry on after such a loss.

I hope the lesson from this tragedy will be to practice kindness and compassion with everyone you meet, rather than jealousy and envy – or criticism and callousness.  Never assume someone doesn’t need your help because they’re successful, or doesn’t deserve it because they’re not. Be a real friend.  Be supportive. Be open about your own struggles so the people in your life know it’s safe to be open about theirs.

Honor the life of Anthony Bourdain by reaching out to someone you know, or suspect, is going through a tough time, whoever they are, a stranger, a sibling, a significant other, a friend. Because the truth is, we all have the power to rally reinforcements to help fight the personal battles of another human being, and to potentially save a life.

Volunteer, Donate, and Learn Ways to Help Someone in Crisis