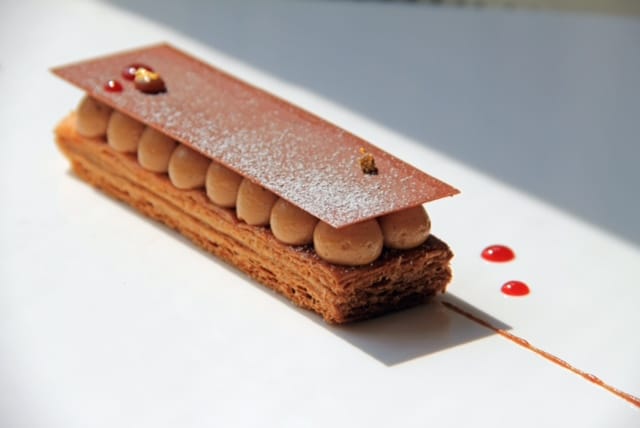 American chefs with Eastern European roots are taking their traditions and transforming them into modern desserts for Westerners, showcasing both the opulent traditional cuisine of the old Russian Empire and the simple fare that prevailed after the Soviet revolution of 1917.  “So many people don’t realize how important the influence of Slavic nations is on the global dessert scene, especially in America,” says Serbian-born Miro Uskokovic, Executive Pastry Chef at New York’s Michelin-starred Gramercy Tavern.  Uskokovic points out that many sweets popular in the United States – doughnuts, babka, baba au rum, blini and blintz– all originated in Eastern Europe and were brought by immigrants.

Another dessert on the Gramercy Tavern menu that reflects Miro’s childhood is a carob cake with apple-date compote, yogurt, and hickory bark ice cream. Uskokovic explains, “Hickory is not necessarily something found and used back home, but I was inspired by my upbringing to use the bark of this tree, boiling it in milk and turning it into ice cream. We all knew devastating times in the former Yugoslavia, food was scarce for many people, and though my family was safe, many were not and resorted to looking for nutrition in unexpected places like boiling and eating the bark of a tree.” The hickory bark ice cream has become the signature ice cream flavor at Gramercy.

On the west coast in Portland, Oregon, James Beard-award winning chef Vitaly Paley’s latent nostalgia for the flavors of his childhood surfaced when he staged a series of Soviet themed pop-up dinners, adapting recipes from old cookbooks to Pacific Northwest ingredients. The popular sold-out pop-ups eventually led him to open Headwaters, Paley’s restaurant in the historic Heathman Hotel, where his lavish Russian Tea Service has met with much success.

Paley, who emigrated from Russia at age 13, planning a career as a concert pianist, eventually traded music studies at Julliard for a degree from the French Culinary Institute. After stints at several top New York establishments, and an apprenticeship in France, he and his wife Kimberly headed west, and are now partners in four highly successful Portland restaurants.

With the collaboration of pastry chef Jeff McCarthy, who oversees the bread and dessert program at Headwaters, Paley pays homage to Slavic sweets in an opulent setting, showcasing desserts like Torte Po Kievski with hazelnut meringue, coffee buttercream, and chocolate ganache, and Steopka, “grandmother’s sour cream and walnut cake.”

While the elegant decor at the Heathman, with samovars and old Paley family heirlooms, recalls the gilded Tsarist times, across town at Kachka, Chef and Co-owner Bonnie Morales and husband Israel Morales’s hip hangout evokes the Soviet era with vintage propaganda posters and windows framed to resemble a Russian dacha.

Bonnie Morales, a first generation immigrant whose parents are from Belarus, grew up in Chicago, trained at the CIA, and met her husband when both were working at Tru. She never imagined a culinary future recreating her family’s recipes, but her husband’s enthusiasm convinced her to explore her roots and catch the current wave of interest in fermenting and curing, both of which are culinary traditions found in Eastern Europe.  Her journey led to the publication of Kachka: A Return to Russian Cooking, which was nominated for a 2018 IACP cookbook award.

Russian sweets emerge from Morales kitchen with a Pacific Northwest accent. “I get to take advantage of local ingredients,” she observes, pointing out the similarities of the bounty and climate to Belarus that yields sour cherries for vareniki (boiled dumplings), hazelnuts and black currents for an ice cream sandwich, and honey-poached mountain rose apples served with cardamom cream.

“When creating desserts for Kachka,” Morales says, “I mostly pull from the dishes I grew up with. Often I start by following my mom’s recipe to get a firm foundation, and then make modifications to suit my taste. I think it’s disrespectful to tinker with a traditional dish unless you fully understand what it is in its original form.” She cites as an example Oreshki, small nut-shaped cookies filled with milk caramel, that she recalls having a thick, tough dough and overly sweet filling. Morales modernized the recipe to create a more buttery, tender dough, balanced with a filling of milk caramel, walnuts, chicory extract, and salt, “so the Kachka version is still very authentic, but distinctive.”

Other contemporary chefs, like Michael Laiskonis of Institute for Culinary Education (ICE), whose great grandfather emigrated to the United States from Lithuania in the early 1900’s, have rediscovered their old world roots. Laiskonis has found it interesting “to explore the flavor profiles and products of the region, but used in less traditional ways.”  He explained, “When I think of Lithuania I think of honey, rye bread, fermented dairy, apples, hazelnuts, chestnuts, beer, botanical spirits,” ingredients that have often provided inspiration to the former Executive Pastry Chef of Le Bernardin.

To recreate a traditional Latvian dessert, Rupjmaizes Kartojums, a soaked rye bread trifle, composed of cream and berries, Laiskonis “reworked the basic flavors to create a high-brow nudge toward inventiveness, but also a nod to its homespun origins. Most important was that I didn’t take the idea of the dish so far away from the classic idea to render it unrecognizable.”

Laiskonis concluded with an observation that captures the creative movement of many of his contemporaries in the U.S. with Eastern European roots, “Conceptually, this dessert came full circle for me, through its interplay of ‘new’ and ‘old,’ I realized that one person’s nostalgia is another person’s opportunity for discovery.”