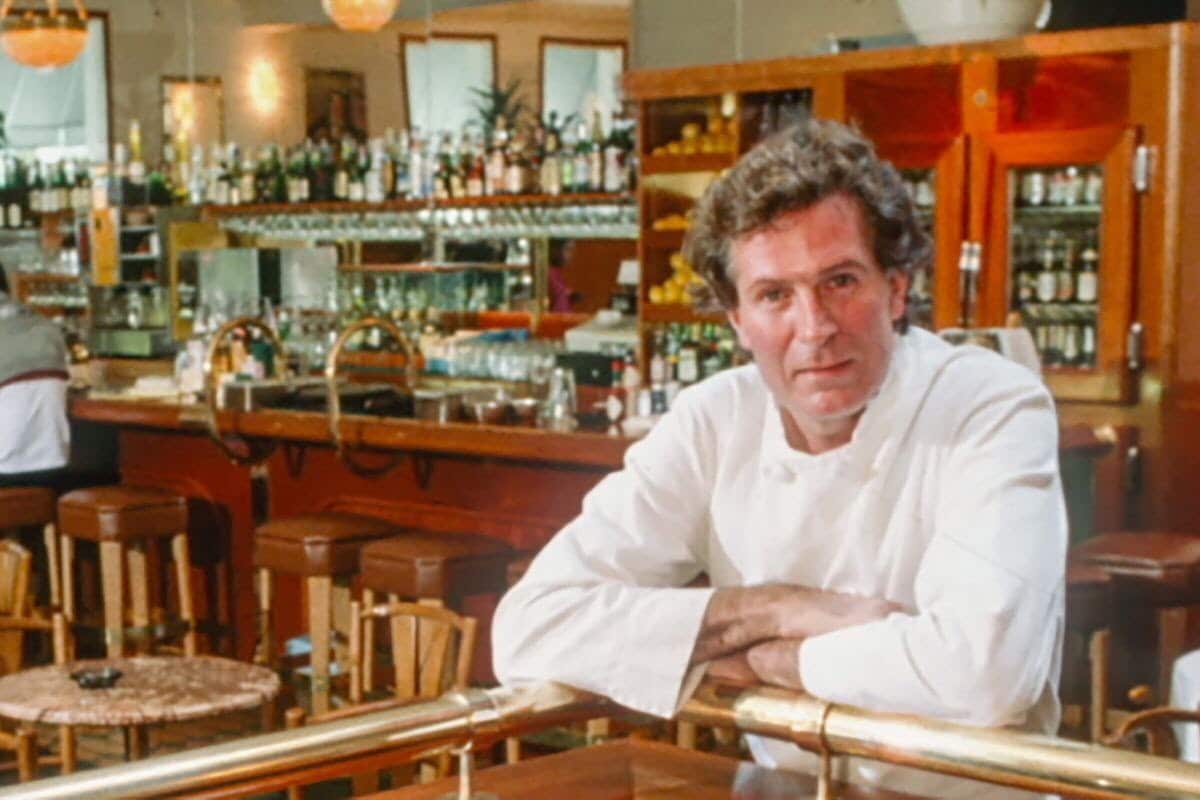 Based on the rumors I’d heard, if Chef Jeremiah Tower was himself a book, the dust-cover promo quotes would read something like: “magnetic, charming and wildly mysterious,” “the ultimate party host and provocateur,” and “a true culinary pioneer.” After reading his autobiography, Start the Fire: How I Began A Food Revolution in America, and watching the CNN documentary, Jeremiah Tower, The Last Magnificent, produced by his late friend Anthony Bourdain, I was curious to discover if the talk was true.

Sitting down with Jeremiah and his fiancé Curtis Cox quickly revealed that not only is he all of those things, but that even in light of his remarkably sophisticated past, he’s one of the most approachable people you could ever meet. He’d probably get a little uncomfortable reading this, because he’s humble as well –– admitting the name of his documentary, “The Last Magnificent,” embarrassed him quite a bit. One of my favorite things about Jeremiah, however, is his ability to tell a damn-good story, and it’s through his tales that I was able to journey with him back in time.

“The dinner parties I took from childhood, my aunt and uncle,” Jeremiah began. “When I was 16, my Russian uncle said that my right of passage to manhood was to have eight shots of vodka, with caviar and a four-course dinner, and then Madeira, ending with a big scotch and soda. I also traveled with my parents around the world, eating in the best restaurants. I always remembered exactly the way things looked and tasted.”

In both his book and documentary, Jeremiah explains how although he lived a posh life, he was immensely lonely. This solitude led him to retreat to ritzy restaurants, turning them into his own grandiose playgrounds. It’s during this time that he became obsessively fascinated with menus and the stories they told. As he grew up, he’d often successfully take over in his family’s kitchen when his mother became too drunk to continue hosting her own lavish parties.

During his Harvard University years, Jeremiah hosted dinners with intricate, themed menus for friends and classmates. After college, out of pure economic desperation, he decided to turn his passion for cooking into a serious endeavor, landing a job as Head Chef at Alice Water’s then quaint and relatively unknown, Chez Panisse.

I went from college dinner parties straight to Chez Panisse, and suddenly I’m not only a chef, I’m the only chef, the only person in the kitchen.  ~ Chef Jeremiah Tower

Jeremiah explained. “They said, ‘go ahead and cook,’ and I thought, holy fuck I’ve never done this, but I just treated it like another dinner party.” Alongside Alice Waters, Jeremiah helped make Chez Panisse one of the most famous restaurants in the world. But it was his solo endeavor, Stars, that still lights up his eyes to talk about today.

As one of the hottest places to be in San Francisco at the time, Stars broke boundaries left and right. Beyond Jeremiah’s ambitious, daily-changing menu and the electric, theatrical vibe he’d created, he became one of the first chefs to advocate for female cooks and bartenders, even before launching Stars.

“I needed an investor in the bar business if I was going to open Stars,” he happily sighed. “The people from Balboa Café were interested but said, ‘First you have to come and help the Balboa Café,’ which had turned into sort of a testosterone toilet. I said, ‘OK, stand back!’ First, I got female bartenders. All the regulars said, ‘well, I can’t come back here!’ And then I put in flowers. ‘Flowers? What is this a fag restaurant?’” He chuckled. “Within two weeks, all of those regulars were not only sitting there getting served by women, they were saying things like ‘well don’t you think those flowers are a bit blah, blah, blah?’ I thought, alright, we got ‘em!”

This same idea carried over into Stars in 1984, which became the launching pad for many women, including one of today’s most celebrated chefs, the now Michelin three-star Chef Dominique Crenn. “Stars was inclusive completely,” Jeremiah insisted.

As with most restaurants at the time, the grill was the toughest position on the line. It was hot and tedious, and it was usually this person’s job to call all the orders. Until then, the position had always belonged to a man.

“There were several wonderful women on the line,” he recalled. “And it was time to put a woman on the grill. I said to the guys, ‘I’m standing right here, so don’t give her a hard time.‘ And of course, it got very busy and I’m moving all around the kitchen. There was a moment, coincidentally, when the piano player stopped playing and hadn’t gone to turn the music on yet, so it was just the sound of people eating and drinking, and not very loud.

At that moment, they had insulted her too much. She turned around to the four guys and yelled, ‘Suck my dick!’ It went all around the restaurant and I just ducked down on my knees and thought, oh, my god! Then the whole restaurant stood up and started applauding, and I brought her out to take a bow. ~ Chef Jeremiah Tower

It’s worth mentioning that Chef Mario Batali also rose to fame at Stars and became close friends with Jeremiah. Since the #MeToo movement, Batali has been accused of sexually abusive behavior by several women and has removed himself from his business ventures.

Jeremiah didn’t discuss Batali directly, and when I asked him his thoughts on abusive behavior in restaurants he insisted, “all the staff at Stars got a letter in their pay check in 1990 saying that there would be absolutely zero tolerance for any [abusive] behavior. I don’t care who you are, if this goes on, you’ll be instantly dismissed. That was 1990! That’s just manners, it’s the way you treat people. It’s got a name now and that’s very good because it’s bringing it out, but it has always been there. You were either a beast or you weren’t.”

Stars also had a revolutionary atmosphere. Jeremiah designed the restaurant to be open and vibrant, with the dining room, bar and kitchen forming one large space. Back in the mid-80’s the three areas were generally kept apart. It was one of the most exciting restaurants at the time, welcoming every type of person to an incredible meal alongside an almost circus-like show. Jeremiah was the ring leader – with a glass of champagne in hand, either commanding the kitchen or floating around the floor charming his guests.

“On a crowded night with 300 people in the dining room I’d say, ‘busboy, grab a table!’ And he’d just pick up a table over his head and walk through, ‘excuse me, excuse me, excuse me!’ People loved it. If a light bulb went out, I’d get a busboy to bring me a ladder and I’d go with him and climb up. I always begged for a light bulb to go out because it caused such an effect.”

Unfortunately, Stars saw its last days in 1999. A fraudulent court case from a former employee left Jeremiah heartbroken and angry. And then, the neighboring Civic Center, which had been the life-source of that area, closed down for two years, leaving Jeremiah to find alternative income through franchises and other ventures to keep Stars afloat. In the end, the choice to close was a personal one. It was a combination of circumstances, and according to Jeremiah, it was also the burden of fame.

After three attempts at my life, I thought, fuck this! I’m going to the beach! I had great conversations with Tony Bourdain about that–– the cost of fame. ~ Chef Jeremiah Tower

To the beach he went, without saying a word to anyone. Jeremiah went from being one of the first celebrity chefs to instantly dropping off the radar and living a secluded and calm life in Mexico. After more than a decade, he suddenly appeared back on the scene. Beloved Chef and TV Documentarian Anthony Bourdain had read Jeremiah’s book and was immediately inspired to share it with his long-time producer Lydia Tenaglia.

Jeremiah agreed to meet Lydia at Waterbar in San Francisco. “I said, ‘get me a glass, no, a bottle of Champagne and let’s talk.’ So, her first question was, as I chugged my glass of Champagne, ‘what was your father like?’ and I said, ‘he was a prick!’ I went, oh my god where did that come from? I mean, I believe it, and I know it, but I would never have just said that. But there was something about her, so I just let it all hang out. In one mad moment, I even sent her my notebooks – culinary notebooks, and notebooks from college, when I was 19 and dropping Mescaline every day. The first thing I say [in the documentary], ‘somehow I’m not a human being,’ that was from the Mescaline!”

Jeremiah laughed and continued, “it was funny because I’d never seen the movie until the premiere in New York. I said, Lydia, let’s sit in the back in case we have to run for it. If they hate this movie we’re running. After that first line, it was dead silence and I whispered, ‘Lydia, let’s get out of here, they hate this fucking movie.’ And the woman behind me heard me say it and burst out laughing. Then the whole place sort of relaxed, and it got a 15-minute standing ovation at the end, much to my absolute shock.”

As he spoke further about the film, I gathered a true sense of pride for the story they had depicted of him and his accomplishments. His one critique, however, was its ending.

At the end it looks so lonely with me going up the stairs. Brilliant ending, but I wouldn’t have… well, that’s just not my ending. ~ Chef Jeremiah Tower

How very right he is too. This was not to be Jeremiah’s ending, and in fact, he has steadily become an active character in the culinary scene once again. “I’ve probably just turned more into a curmudgeon,” he responded when I asked how he’s changed since his return.

As far as what he’s dreaming about these days, he told me of his excitement to continue deep-sea diving with manta rays, and then smiled and softly put his hand on his fiancés leg and said, “and living with my man, he’s my dream actually.” Smiling back, his fiancé Curtis shared how they’d met.

Jeremiah came into the restaurant where Curtis was working as a server. “He walks in the door and he’s wearing this all-black, stunning Armani suit and I was like, Oh, hello!” Curtis smirked. “He sits down, and I open a bottle of Dom Perignon. As I’m pouring it, I’m just directly staring into his eyes. Suddenly, he’s like, uhem, uhem! And I realized that I’m just pouring Dom all over the table. All over the table!” By the end of the meal, Jeremiah was smitten by Curtis and asked for his number. Now, 11 years later, the two are happily living together in Mérida, Mexico, and traveling the US, attending events side-by-side.

Jeremiah might have taken himself off of the front pages for a while, but his early challenges to the status quo inspired the restaurant industry to work towards change. While his flair for storytelling makes for a fascinating glimpse into the past, I got the sense that the past isn’t where he wants to remain. If this new chapter in his career is anything like the others, I expect he’ll make plenty more waves as he navigates today’s choppy industry waters.