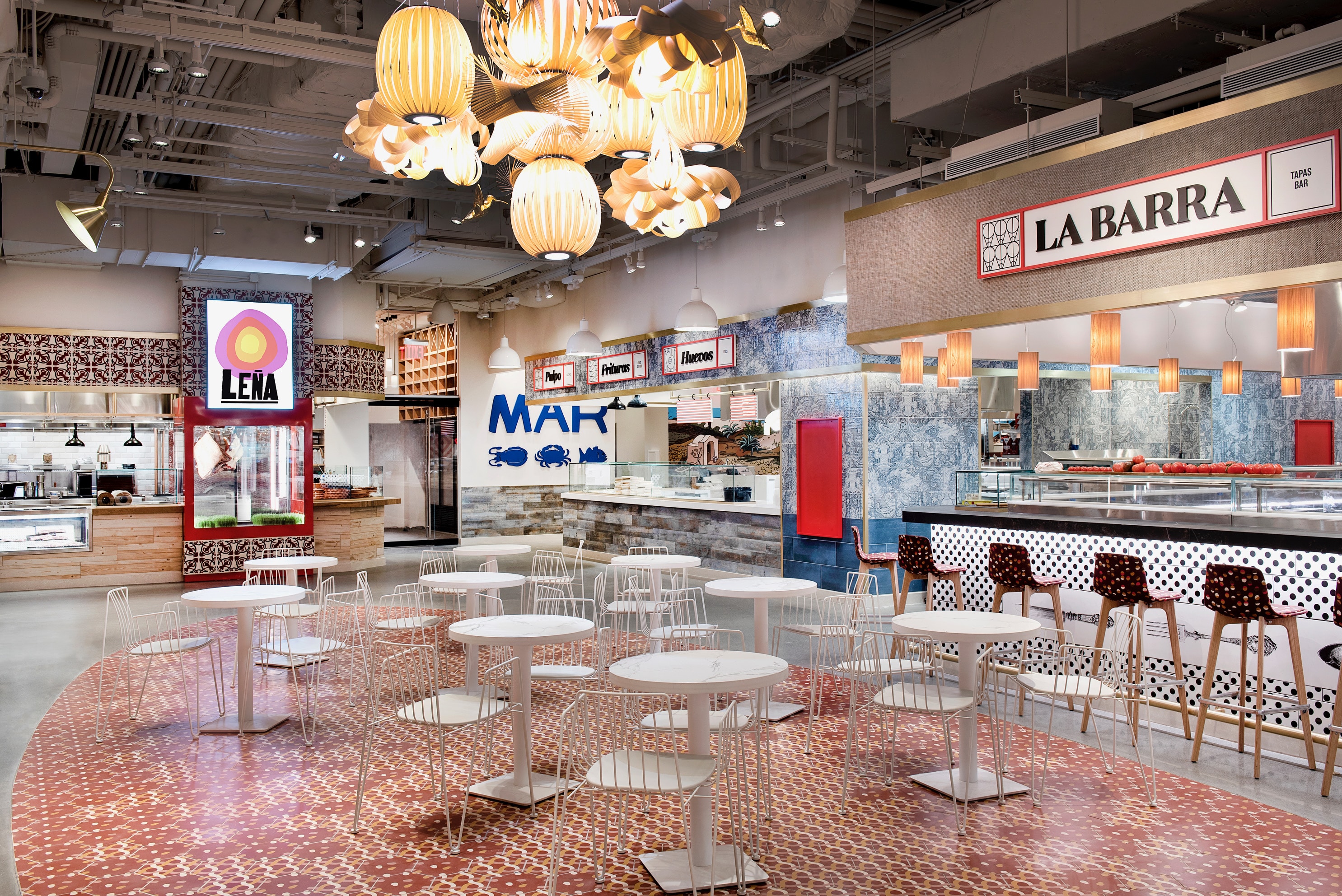 Mercado Little Spain, opening today in Hudson Yards, is Chef José Andrés’ most ambitious project ever, and his first in NYC.  Partnering with long-time friends Albert Adrià and Ferran Adrià, the trio assembled a talented team to share their ambition and bring to life their vision for a truly authentic Spanish gastronomic experience.  Among their team’s leaders is ThinkFoodGroup’s Director of Culinary Development, Nicolas Lopèz Pelaz, who met with me pre-opening to chat about the project and about his mentor José Andrés.

In a press release, José Andrés said, “We are bringing the most delicious things from every corner of Spain to New York. I am so excited to be opening Mercado Little Spain – this is a dream come true for me and my dear friends Ferran and Albert.”  And what a gorgeous dream it is. When I sat with Chef Nico pre-opening, Mercado Little Spain — though still full of construction workers focused on finishing touches — was an eye-poppingly beautiful space sporting sleek Spanish tiles and a genuine mercado vibe.

Nico extended his arms to emphasize all of what was coming together in the last days, and explained, “José has a huge agenda here at Mercado, plus he’s running over thirty restaurants, and as you know, he’s also trying to make the world a better place through his humanitarian work. José is in Colombia, on the border of Venezuela, feeding the refugees who are escaping from the situation of that country. It’s incredible, I’ve never worked with a chef like him before.”

José cares about his team, and I think that’s why ThinkFoodGroup is so successful. José has the vision, and we have the directions from him, and there’s talented teams that make his vision happen. It’s a company that really takes care of its people, so everybody is happy. When we’re all happy, the restaurants are successful. ~ Chef Nicolas Lopèz Pelaz

José focuses on the project while juggling a lot. Nico elaborated, “The way we work with José is we schedule every week the days dedicated to Mercado.  We talk about the progress, share pictures of the dishes, we do tastings, review recipes… and he gives us directions on every detail. When Ferran and Albert are there, we get their guidance and implement their creative input too.”

Something very interesting that José does, that other chefs haven’t done usually, is we go to his house and we all cook together. So we learn from him how he likes to cook every dish, we learn his recipes – his personal recipes, or recipes from his restaurants. We watch him cooking. Then we can execute his style in the restaurants here. ~ Chef Nicolas Lopèz Pelaz

Two years ago, Chef Nico didn’t imagine he’d be here.  After years in Spain, England and Columbia working in avant-garde Michelin-starred restaurants where traditional food was far from the agenda, he “hit a wall” in Columbia and needed a big change. He accepted the Executive Chef position at the St. Regis Hotel in Washington DC, where he hit another wall.  The hotel kitchen was a bit too much change for him.

Nico recalled, “It was at that point I met José, and he said, ‘Nico, welcome to DC! I wish you a lot of success, if you have any problem or you want a change of life, call me.’ So two weeks later, I called him and told him I was looking for a change. He said, ‘Ok, come to my house tonight, we’ll cook together.’”

I couldn’t believe it! Here was José Andrés telling me to come to his house to cook a paella! With him! I got super nervous, I mean, go and cook a paella at Chef José Andrés’ house?? I just met him one day, for twenty minutes, and he was asking me to cook at home with him! ~ Chef Nicolas Lopèz Pelaz

That’s exactly what Nico did, he gathered his courage, confidence, and knives, and headed over to José’s house. “When I got there I told him maybe I would just move back to Spain, and he said, ‘Wait, Nico, just hold on, let’s cook the paella first, then we talk.’ So we started the fire, and started cooking the paella together. He was watching me, watching my movements, asking me ‘What do we have to do now?’”

We finished cooking, José asked about my future, my wishes. After that unusual interview, he told me, ‘Go tomorrow to Minibar, I want to see you cooking in the restaurant for two weeks.’ After that, he offered me this job of being the Head R&D Chef for Mercado Little Spain. It was a beautiful story! ~ Chef Nicolas Lopèz Pelaz

Initially, Nico wanted to work at Minibar, it was more his speed, cutting-edge creativity unshackled by tradition. Mercado Little Spain is all about tradition.  That could seem ironic given that Mercado partners Ferran Adrià and Albert Adrià were the veritable inventors of untraditional Spanish molecular gastronomie, and José was himself a chef for years at their game-changing World’s Best Restaurant elBulli.

When I asked Nico about this curve, he laughed, “Well, it’s quite different!  All my career I’ve been focused on new cuisines and here what José explained to me was that Mercado was going back to the real traditions of Spain. In helping José to develop Mercado I’ve learned more about Spanish cuisine than I ever knew. Too many times we chefs go to learn the cuisine of Japan or France before we even know our own cuisines.”

I realized at the end, there’s only two kinds of cuisines, the good cuisine and the bad cuisine, and it doesn’t matter if you’re doing avant-garde dishes like at Minibar or perfect traditional croquetas like we do at Jaleo, in the end it’s good cuisine.  ~ Chef Nicolas Lopèz Pelaz

The food you’ll find at Mercado, from the paella and tapas to the empanadas and jamón, are the result of a pursuit of pure Spanish traditions. R&D Chef Nico dove into his research, uncovering facts like whether or not a real empanada has tomatoes (it doesn’t). Nico is especially proud of the fact that the Mercado team sourced the best ingredients after extensive travel in Spain. They connected Spanish producers and American vendors to import many products never before found State-side. Emphasizing this, Ferran Adrià said in a press release, “The hope is that [Mercado] will become a great tool for bringing Spanish products to the U.S.”

Mercado Little Spain opens its doors today at Hudson Yards, but when I met with Nico it was about a week before opening. He was buzzing with nervous excitement and energy, and full of pride over the team effort that made Mercado. “The team is so good, and in the end we work super hard, so many hours, just to pull the pieces together. The most important part is to be confident in our work and what we developed, and now let’s just execute it!”

And execute it they did. Beginning today with Bar Celona, as well as a preview of several food kiosks, Mercado Little Spain will roll out three full-service restaurants, 15 dining and retail kiosks, and two dedicated bars. “Mercado is going to be real Spanish food, real, real.  The pastry is real, the paella cooked on the real wood fire, tapas like you would get in Spain, seafood with real Spanish recipes,” Nico grinned. “It’s not going to be fusion cooking. It’s not going to be Spanish food for tourists. We’re going to show people the real Spain!”