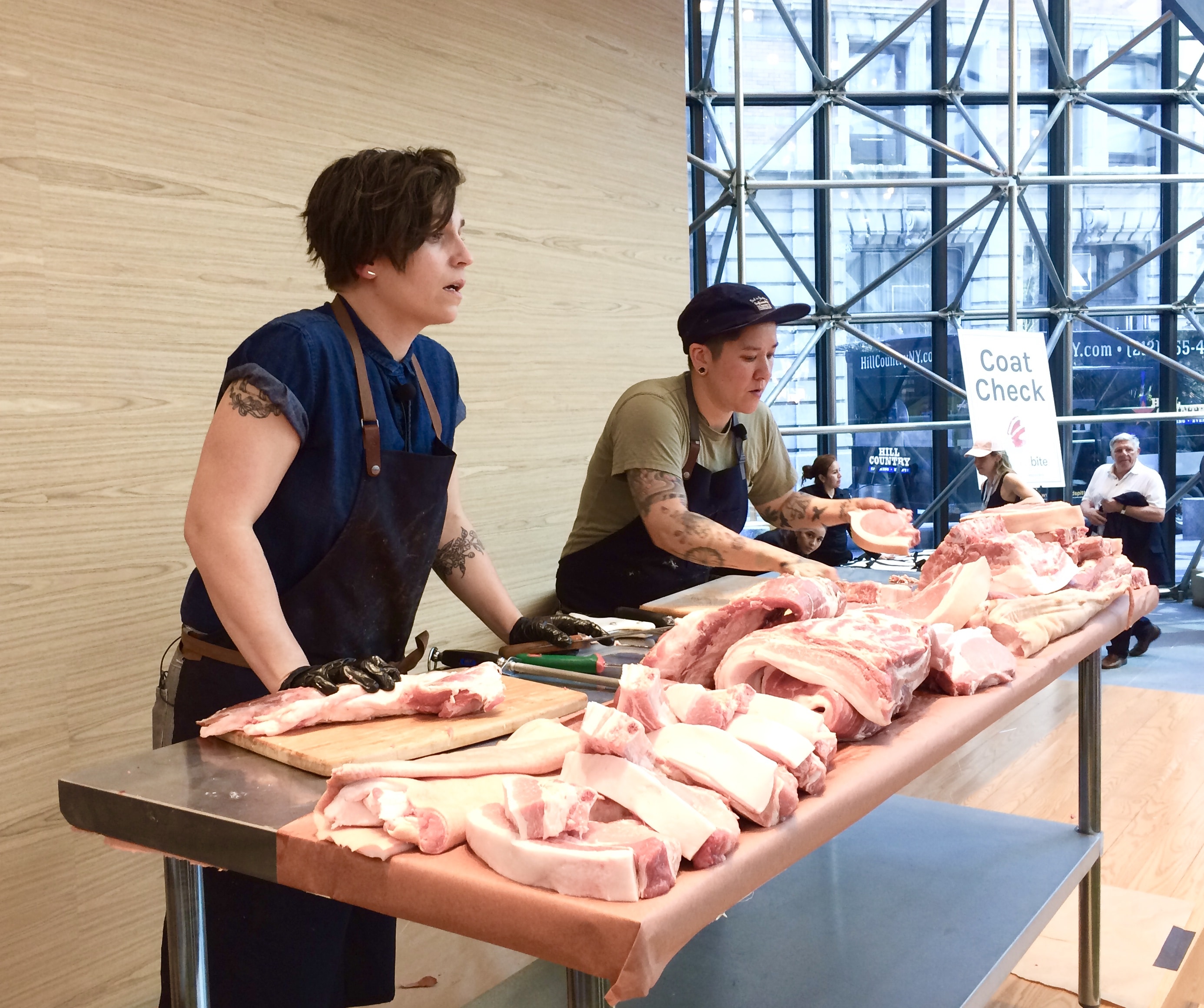 It took four people to lug the 250 pound Joyce Farms heritage pig carcass onto the stage, but only two rockstar butchers by the names of Jocelyn Guest and Erika Nakamura to butcher it down. It was truly an experience I’ll never forget, as I got the chance to watch these two ladies methodically slice, saw and break down a hog in front of a live audience at this year’s Baldor Bite.

Mesmerized and amazed by their skills, I knew that I just had to talk to these two and find out more about their journey into this male-dominated corner of the culinary world, as I pursue my quest for feminist food. Although my initial focus was on their power as women in the industry, during a phone interview, Erika and Jocelyn painted a larger picture of how they’d like to change the industry for everyone by speaking out against negative kitchen culture in general.

Erika’s career in the culinary world took off a little later in life, and after attending culinary school at the International Culinary Center she spent some time working in a variety of top tier restaurants. While she loved the work she was doing, the harshness of these intense kitchens left a lot to be desired. The stress and pressure of being on the line was too much for her at times, and she told me how she’d often get kicked off the line by various chefs. “I really struggled under that system,” Erika confessed. “But every time I got kicked off the line, I would [as the chef’s way of punishment] get to put my hands on a giant cut of meat or scrape bones. That’s kind of how my initial steps into butchery came about.”

After discovering her newfound passion for butchering, Erika left the kitchen to apprentice at the famous Fleisher’s in New York as one of the first to join its apprentice program. Eventually, she went on to open her own place in Los Angeles, Lindy and Grundy, a female-run, high-end butcher shop that garnered quite a bit of media attention.

The popular spot also caught the attention of Jocelyn Guest who had recently decided to leave her career as a writer to pursue a culinary career. Jocelyn ended up an apprentice at Lindy and Grundy and admitted, “I didn’t even know how to hold a boning knife when I showed up at her shop, I lied and said I did though.”

Lindy and Grundy quickly became a sort of feminine-butcher haven or as Jocelyn put it, “a little island in the midst of it all.” The type of island these women created for themselves was, and still is, unique in the industry. If you were to close your eyes and imagine what a butcher looks like, you’d probably come up with an image of a burley, rough-around-the-edges kind of guy holding a giant meat cleaver, and hanging out in a blood splattered walk-in. But these two explained to me that while these types of butchers do exist, there’s much more involved in the process, with plenty of opportunity for a smaller-framed person to achieve the same results.

“I think the basic concept is that there’s gravity and leverage involved,” Erika explained. “You don’t have to be someone who’s constantly in beast mode, you can actually figure out how to hold something a certain way, and lean into it a certain way. I’m 5’1, like 110 lbs soaking wet. It’s easier for me to think about how things come apart instead of just ripping through it. I think those types of thoughts really make up who you are as a butcher.”

What people often don’t think about is that women have been butchering like this for a very long time. Jocelyn mentioned a cookbook she found of her grandmother’s from around the 1940’s and told me, “It literally has a diagram of where to cut a squirrel’s tail and how to step on it and pull the skin off. It’s just so funny to me that it’s such a novelty now.”

And as far as women cutting shit up and making it happen, we’re definitely not the first and we definitely won’t be the last. This is what cavewomen did like 4000 years ago. When a neanderthal walked in with a big, stupid animal, she’d be like, ‘alright get out of here, I got this!’ ~ Jocelyn Guest

As much as Erika and Jocelyn seem to take pride in changing the current perspective on the gender stereotypes in their industry and potentially inspiring other women to do so as well, they confessed to me that they’ve done quite a bit of talking on the issue and are looking forward to the tide finally changing someday. “I love that people care and that younger women can read these things and feel more empowered,” Jocelyn said. “But I’m really excited for the day when no one cares anymore.” Erika chimed in, “like it’s no longer a topic of discussion because it’s normal.”

As their most recent venture, Jocelyn and Erika partnered up with celebrity chef April Bloomfield to open a butcher shop in the Upper West Side, White Gold, in 2016. The two spoke fondly about the experience, describing how great it was to create their own kitchen culture and strong family vibe among employees. Unfortunately, due to some unforeseen circumstances, they decided to separate themselves from the business this past March, and White Gold ended up closing last month.

While it doesn’t seem directly correlated with their departure, part owner of White Gold and famous restaurateur Ken Friedman is currently under fire for sexual misconduct allegations. Although the topic is very sensitive in nature, Erika told me that while at White Gold she responded to the circumstances the best way she knew how. “For us, as these things came up, it was important to just have everybody else’s back.”

Our day-to-day, boots-on-the-ground efforts were to make sure that we all felt supported and to just open up a dialogue. If people felt uncomfortable in any way and wanted to talk about it, they needed to know that they had the space and safety there to do so. ~ Erika Nakamura

This really does come back full-circle from Erika’s initial struggles working in extreme and stressful kitchens, and it seems that the idea of maintaining a positive and healthy work environment is something of great importance to them. “The frequent issue is that, especially in old-school kitchens, it’s all about martyring and overworking yourself and that’s how you’d gain respect from people,” Erika said. “But things are changing, which is incredible. I guess there’s a part of us that’s wanting to usher that change along, and take a look at who we are as people to try to enrich the quality of life a little bit more.”