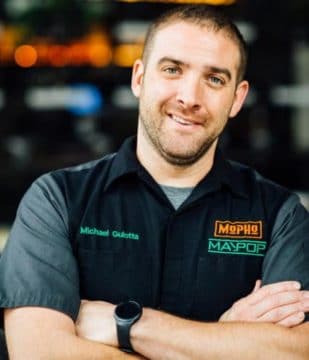 Born and raised in New Orleans, Chef Michael Gulotta began cooking in local restaurants at a young age.  After graduating from the Chef John Folse Culinary Institute, he joined the newly opened Restaurant August.  Gulotta then took leave to train in the Italian Riviera and Germany’s Black Forest. When Hurricane Katrina hit, Michael returned home to help rebuild and assist with August’s re-opening. He was named Chef de Cuisine in 2007 and led the award-winning kitchen for 6 years, while establishing relationships with local farmers and purveyors.

He opened his first restaurant, MOPHO, in January of 2014 with his brother, Jeffrey Gulotta, and high-school friend, Jeffrey Bybee.  Located in New Orleans’ Mid City, MOPHO strives to be a true neighborhood restaurant and a destination for Southeast Asian inspired cuisine utilizing the Louisiana pantry.  In its first year MOPHO was nominated for America’s Best New Restaurant by Bon Appétit Magazine and named Restaurant of the Year by New Orleans Magazine.  In 2016 Michael was named one of Top 30 Chefs to Watch in the nation by Plate Magazine, A New Orleans Rising Star by Starchefs, and a Best New Chef by Food & Wine magazine.

Energetic, vocal, and outspoken on important issues affecting the restaurant industry today, you can follow Michael on Facebook!

Why I Joined the #FairKitchens Movement

While I used to think I was thriving in the craziness of kitchens as a line cook, I quickly realized as a kitchen manager that it was not a sustainable model, at least for me personally.