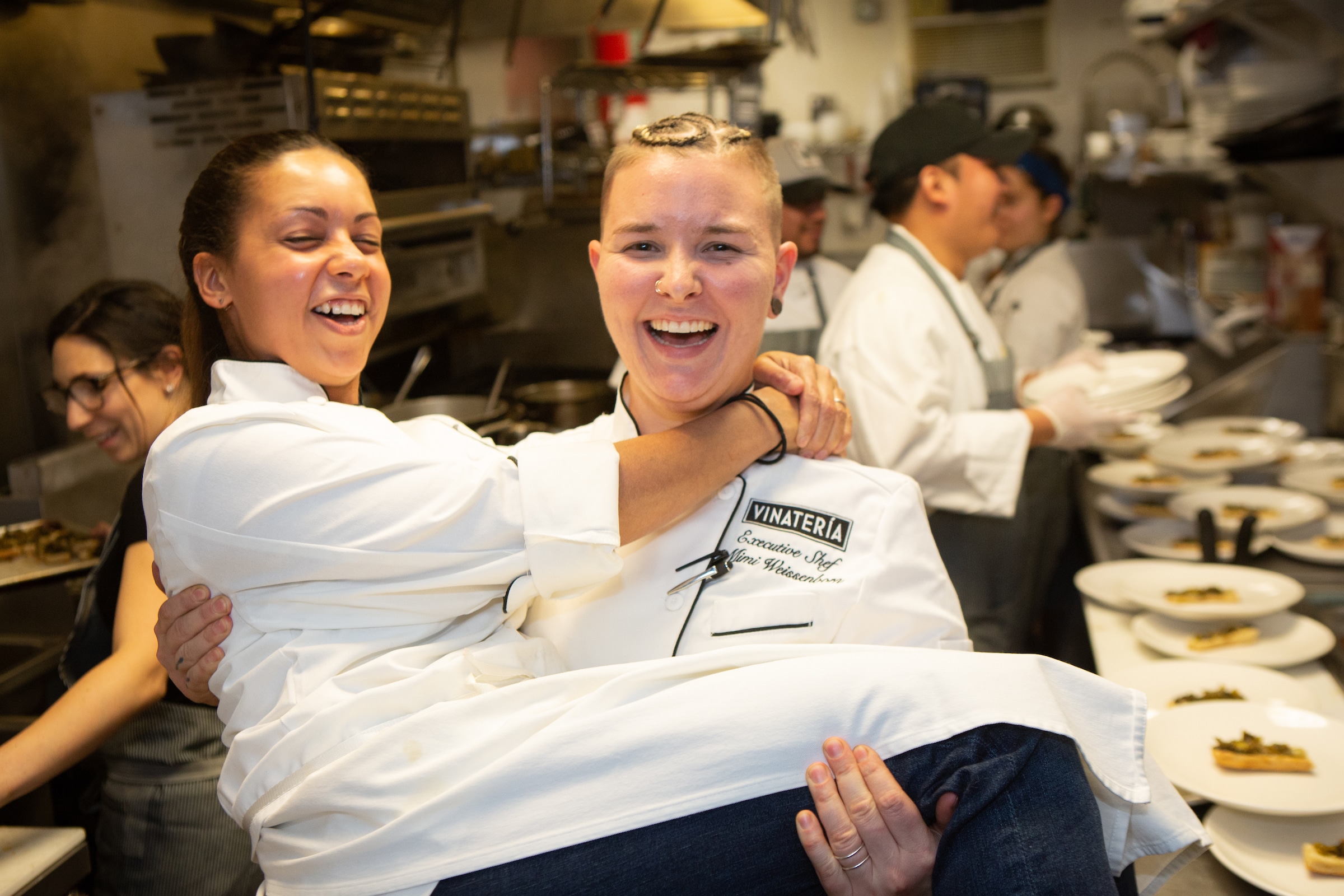 At an upcoming dinner event (date and time to be determined), Executive Chef Mimi Weissenborn of Harlem’s Vinatería will be hosting a 5-course Chef’s Tasting with Elizabeth Falkner celebrating the creativity and collective force of women in the industry. The event is part of Chef Mimi’s ‘Women’s Dinner Series’ and is open to the public with tickets available on Resy. Besides being a delicious dinner and an opportunity to connect chefs with the community, Mimi told me it’s her long-term vision to “harbor a sisterhood among female chefs.”

The idea unfolded after Mimi got the opportunity to host and work alongside famous Chef Stephanie Izard as part of Harlem EatUp! “That was incredible for me, especially as a newcomer to New York,” Mimi recalled. “To work with someone of her star power and caliber was intimidating, but when she arrived and I saw how wonderful she was, along with her Sous Chef Jen, it was just really nice. I thought, there really is something to be said for this and this should be an opportunity for everybody!”

Since that dinner, Mimi has remained in contact with Stephanie and even texts her for industry pointers and tips. “I think when you get to an executive chef position, people may think that your learning stops,” Mimi explained.

I consider myself a life-learner and I love to know what other people are doing and how they’re doing it, so that I can form my own blueprint, to push me further. ~ Mimi Weissenborn

From that positive experience with Stephanie, Mimi and Vinatería owner Yvette Leaper-Bueno decided to reach out to another Harlem-based female chef and last year’s Top Chef runner-up, Adrienne Cheatham, to initiate another event in the same women-collaborative spirit. The result was another sold-out event and the formation of another strong female bond. “Now, Adrienne has kind of slipped into being my chef big sister,” Mimi smiled.

These two dinners are what initially got the ball rolling on her idea, and now by enlisting Elizabeth Falkner, Mimi aims to solidify this as a consistent, ongoing series. As one of the most notable, up-and-coming dining neighborhoods, Harlem makes for the perfect backdrop for  something like this. “The crowd that we’ve gotten up here are really excited,” Mimi said. “They’re interested in what you’re doing, and they’re interested in your story, which is a nice change of pace.”

The story that Mimi wants to share with those involved in the dinners centers completely on creating an open conversation around and between women in the industry as a way to offer support to one another. Mimi shared this disheartening statistic from a recent James Beard blog post, “while more than half of culinary graduates are women, according to the Bureau of Labor Statistics, fewer than 20 percent of working chefs are women.”

Mimi seems to think that among other things, a lot of this comes down to an industry-wide problem with its standard of living, especially prevalent for women who are already battling against the gender-based discrimination and challenges of a male-dominated kitchen.

Whether you’re a man or a woman, when you come out of school, do you really want to make ten dollars an hour to get yelled at? ~ Mimi Weissenborn

She mentioned that it would’ve helped her greatly in the early days of her career to have other women there to tell her to hold her ground, and that it’s ok to fight against the extreme pressures of restaurants. “I think it’s our job now, as this next group of female chefs, to use our voices,” she insisted. “We need to huddle together to create a new environment. We need to know when to say, no, I don’t always have to work sixty-hour work weeks, or when I’m sick, I don’t need to be in the hospital for me to not come into work. These are things that we really need to bring to the forefront and let people know it’s ok to say no.”

It’s no secret that the restaurant world can be brutal toward women, but having a little feminine back-up can go a long way. “I think women definitely get pushed around in this industry, especially when you look at pay comparisons and things of that nature, it’s cruelly unfair.” Mimi emphasized there’s strength in numbers when fighting inequality.

If you had that support crew, you could be like, ‘Hey I don’t think this is fair, they’re offering me $10,000 less!’ – Or whatever it may be, and someone could be like, ‘Hey, girl, don’t back down!’ We need to just stick together. ~ Mimi Weissenborn

Connecting female chefs is the end result that Mimi wants for her events, and in light of her successes, she’s taking it on as almost her duty to fulfill. “Maybe I don’t have the star power of Elizabeth Falkner or Stephanie Izard yet, but I want to take what little voice that I do have here to just make more of an impact, to give back.”

And if supporting women in the restaurant industry isn’t enough to make you purchase a ticket, don’t forget that these two rock-stars are first and foremost fantastic chefs, and plan to put out some truly delicious food. As Mimi excitedly put it, “It’s just going to be a really great dinner, I mean, Elizabeth is coming to town!”

Tickets to the next Women’s Dinner Series with Mimi Weissenborn and Elizabeth Falkner will be available for purchase on Resy once the new date and time have been decided.  Tickets will include a wine-pairing and are $110 per person plus tax and gratuity.