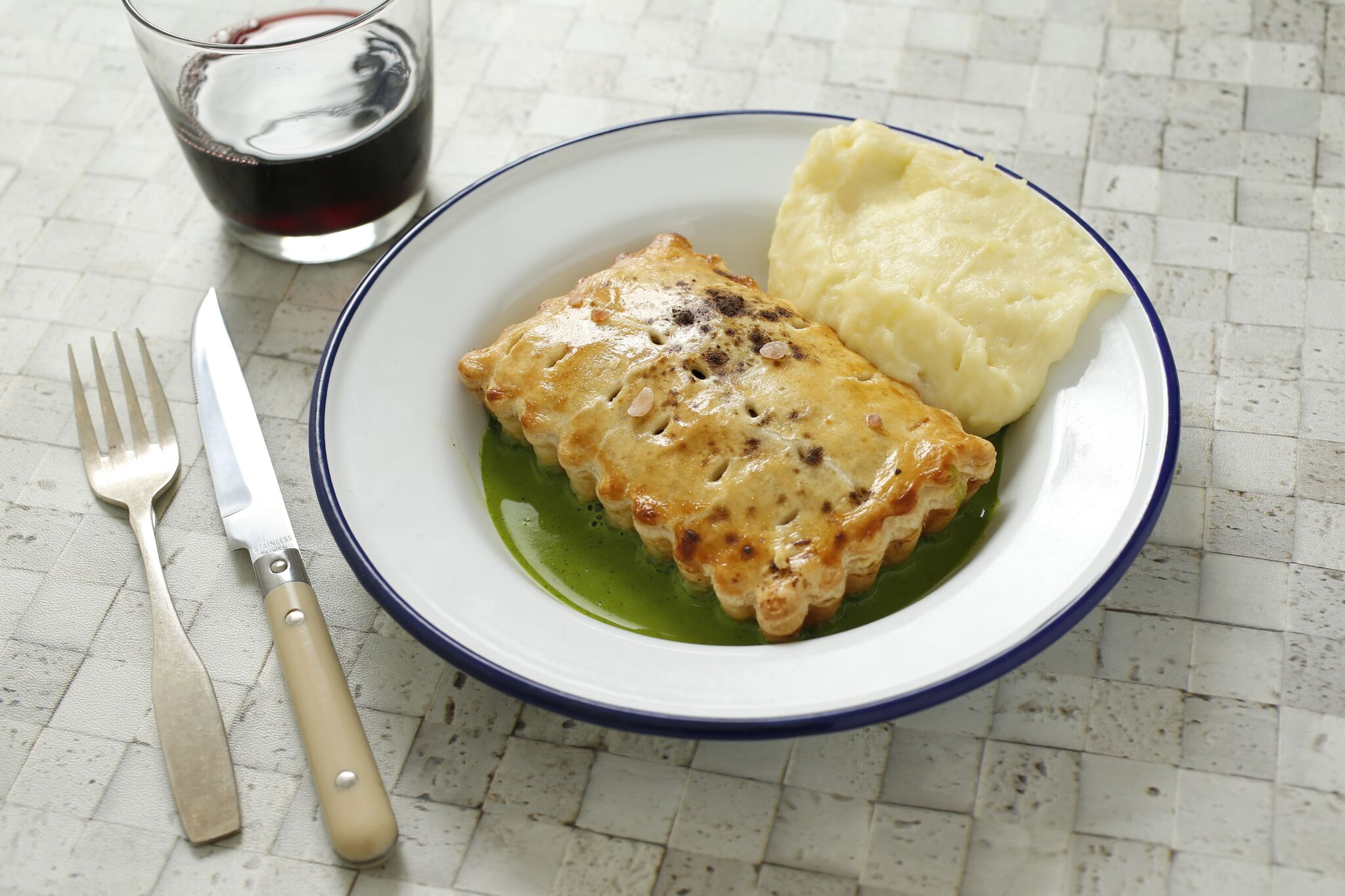 Bill Yosses, celebrated White House Pastry Chef for Presidents Obama and Bush, has exited the Presidential kitchen and is now starring off Broadway. Well, not on stage, rather as pie baker-in-residence for the sizzling revival of Hugh Wheeler and Steven Sondheim’s beloved musical melodrama Sweeney Todd, the Demon Barber of Fleet Street, at the Barrow Street Theatre in New York’s Greenwich Village.

The grizzly musical tale of a murderous barber whose victims are ground into filling for meat pies and sold by Sweeney Todd’s accomplice, Mrs. Lovett, at her suddenly popular pie shop, was a recent hit in London. Produced by the Tooting Arts Club, the show was originally staged in Harrington’s, the oldest working pie and mash shop, where the audience could tuck into pie before the performance.

Moving Sweeney to New York, producer Rachel Edwards decided to recreate the shop within the theater. “She contacted me,” Yosses explained, “and we started planning.” For Yosses, it was an ideal opportunity to expand the reach of Perfect Pie, the pie-making business he launched after his departure from 1600 Pennsylvania Avenue.

Perhaps prophesying Yosses next career move, President Obama had nicknamed his pastry chef “The Crust Master,” saying of Yosses, “Whatever pie you like, he will make it, and it will be the best pie you have ever eaten.” Yosses, as adept at juggling numerous projects as making spectacular desserts, is currently selling a selection of pies online, in addition to making hundreds of chicken and vegetable pies a week for the theater.

The Sweeney pies, pre-ordered for an extra $22.50 when tickets are purchased, are prepared in Yosses’ commissary kitchen in Long Island City and rushed to Barrow Street. Ticket holders can arrive up to an hour before the performance to eat their pie at pub-style banquettes in the Harrington’s replica, served with a generous portion of Yukon Gold mashed potatoes and parsley sauce, known in England as “liquor,”  along with a choice of beer, wine, or a non-alcoholic beverage.

The pies were popular during the Victorian era, when pie and mash shops were inexpensive dining places for workers. They were usually made with eels, an abundant resource from the Thames River. Yosses is not planning to serve eels, but varies the pie ingredients seasonally. Yosses chose chicken for the first weeks of performance, because, he observes, “it is a perennial favorite, very user friendly.”

Beyond tasting the Crust Master’s theater creations, consumers can purchase a wide range of pies online at www.perfectpie.com. “I came up with this idea of a pie business,” Yosses reveals, “because it is the kind of food that I love. It is soul-satisfying both in flavor and in flavor memory. It is a vehicle for great farmer’s market fruits in the summer, or for flavors that can be found year round: lemon meringue, chocolate silk, pecan, Boston cream, rhubarb, kabocha/persimmon, and the venerable apple pie with four types of apples – the list is endless.”

The pies, packaged in heat proof paper containers are shipped the day they are ordered. Not content to rest on his laurels as a ground-breaking American pastry chef at top restaurants like Montrachet and Bouley, author of three books, and recipient of a slew of accolades ranging from the James Beard Foundation’s Who’s Who in Food & Beverage, to an Honorary Doctor of Culinary Arts from Johnson and Wales University, Yosses remains a committed advocate for promoting locally grown food and delicious healthier meals. His latest book, The Sweet Spot: Dialing Back Sugar and Amping Up Flavor, a collaboration with Peter Kaminsky, focuses on desserts with less sugar.

As the upstanding former White House Pastry Chef and author of a cookbook promoting sweets that are better for your health, the off-Broadway pied piper of the murderous tale Sweeney Todd jokes, “No humans will be harmed in the making of our pies!”