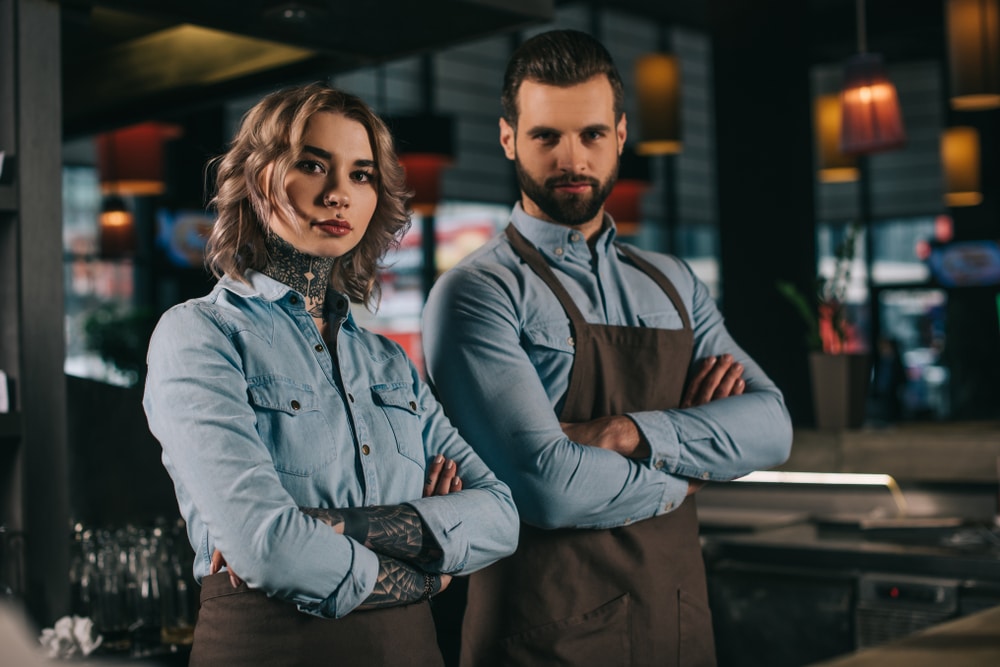 As I chat with you while I stir your Manhattan, fill your water glass, or simply make eye contact from across the bar, I, your bartender, am subconsciously taking measures to prevent violence. While you assume I’m being attentive to earn more tips, I know that sometimes there’s much more at stake. Whether it’s a bar fight or a woman being harassed or followed out by a stranger, violence, especially sexual violence, is always the worst-case scenario for bartenders who are constantly on the front lines.  Often times, the heavy weight of this responsibility doesn’t get the credit or training it deserves.

“It’s simple things like this, that a bartender is doing all the time. You just didn’t know that it was an intervention tactic,” said Eric McGriff of OutSmartNYC, an organization that works toward sexual violence prevention in the nightlife industry. I sat down with Eric, and Chauntel Gerdes, Licensed Master Social Worker, in their Mount Sinai Beth Israel Victim Services office. Both are Prevention Coordinators for OutSmartNYC and they filled me in on their organization’s efforts. “We pass along techniques, tactics, and strategies for intervention for what could potentially be a violent situation,” explained Chauntel.

An important piece of their work revolves around the idea of connecting staff to resources. We live in a time where liability is a constant concern for venue management. This fear can create a sense of discomfort or a lack of care for the person who has experienced or witnessed violence. Not only does it behoove venue management to provide outside resources to staff in dealing with these circumstances, but Chauntel coaches nightlife venues on how to pass this along in a positive way.

Instead of wagging their fingers at the industry and telling them how to behave, they’re focused on getting to the roots of the cause. “It’s really about how can we use anti-violence work as a conversation starter for building relationships with each other, for being more connected to your community.” Chauntel said.

OutSmartNYC spawned from the organization previously named OutSmartBK, which was formed when David Rosen, Brooklyn Allied Bars and Restaurants founder, was approached by two NYPD precincts in the Williamsburg/Green Point area looking for help in lowering the sudden uptick in crimes in their local bars. To avoid any distrust or backlash from the community, the NYPD agreed to fund the efforts without associating their name with it.

“This is really smart of the NYPD,” Chauntel emphasized. “It’s a very good community-policing practice in my opinion. It’s saying ‘we don’t have to take credit for this, you take all the credit. We’ll support you in helping you figure out how you’re going to do this, but can you do it?’” David agreed, and gathered a collective of people from the nightlife industry along with medical professionals like Chauntel and Eric and community members to come at this issue from all sides and make the solution a communal effort.

Often bars get demonized by their communities. Beyond simply the notion that violence can be exacerbated by alcohol, bars get a bad rap for noise complaints, gentrification, liquor licenses or what have you. OutSmartNYC wants to combat this community rivalry. “We can either be in community with venue operators and challenge them to show up with us as community members, or you can just keep treating them like they’re assholes and they’re never going to be a part of this conversation,” Chauntel said.

We all want our community to be safer. We all want patrons to feel like they can come here and have a good time. We want staff to feel empowered, heard and respected by police and patrons. What’s keeping that from happening? ~ Chauntel, OutSmartNYC

This idea of community is especially important at a time when sexual violence is getting the spotlight. With more people coming forward to name perpetrators and movements like #MeToo, we are seeing a shift in the way we approach accountability. Although Chauntel and Eric made it very clear that survivor support should be at the forefront of this issue, OutSmartNYC wants to do more than just come in and train staff, they want to be a continued resource for support and maintain a conversation around these issues.

“OutSmartNYC isn’t training people so you can say rape isn’t happening in my venue,” Chauntel insisted. “That’s not what this work is about. This work is about acknowledging that this happens, not about demonizing venues or individuals. It’s about saying, “Oh, you fucked up? Alright, step into the circle, let’s work together, we can fix this. We are living in such a polarized culture right now and there are opportunities for people to grow but we’re cutting them off from it because we are so angry as a community of survivors and a community supporting survivors.”

This polarization can often take away from what movements like #MeToo are trying to accomplish. Eric, who’s only 25 years old and has a passionate perspective on the movement, is proudly heading up a new series that will be geared toward men and how to navigate sexual violence prevention in our current climate. This series, that another OutSmartNYC member jokingly called the, “How-Not-To-Be-a-Dick Series,” is going to create an open discussion where men can bring their concerns and ideas to the table without offending survivors.

“This is not so that men will jump out in front saying, ‘we’re going to solve this.’ It’s saying that men as leaders can stand with women as a marginalized group or stand behind them and listen to and support them,” said Eric.

I’m doing this to help men find our place within this movement while making space for those people whose voices, opinions, and ideas are often silenced in ways that we don’t even recognize because of our male privilege, because of the way society is structured, and the way that we are socialized and taught to grow up as men. ~ Eric, OutSmartNYC

I walked away from this interview realizing just how crucial it is to acknowledge the responsibility I have as a bartender to keep myself and my guests safe, and the importance of arming myself with as many tools as possible to do so. It really is shocking to think about how little the topic of sexual violence actually gets discussed within venues, but I think with the help of organizations like OutSmartNYC, the industry as a whole will finally start to see how necessary it is for us to change that, and how much support is actually out there.