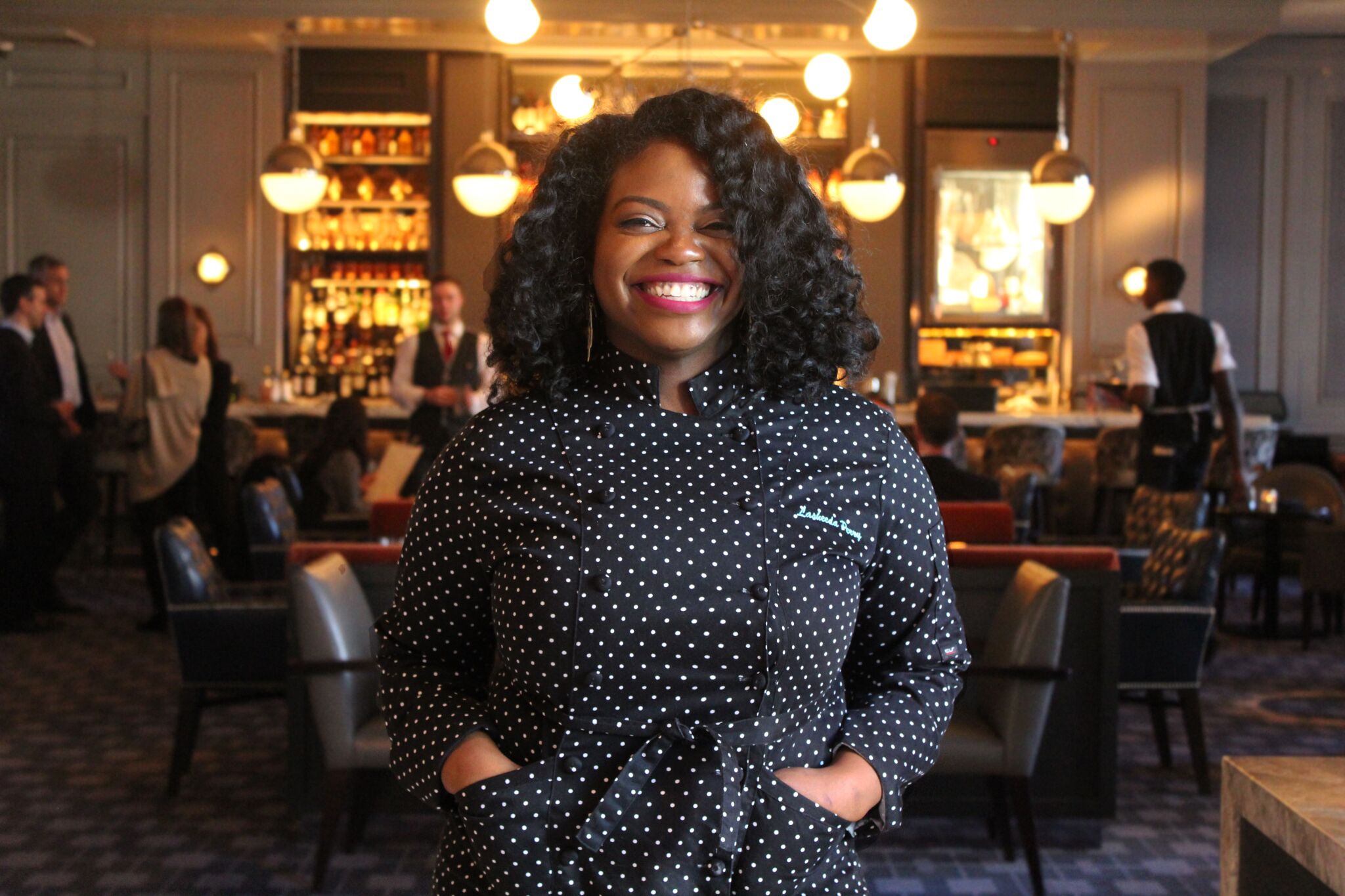 Lasheeda Perry’s sense of hospitality would be wasted in the back of the house were it not for the fact that her desserts convey her spirit so well, playful, fun, and welcoming. Her delicious desserts even seem to plate her beaming smile and positive energy, both of which are off the charts. Both of which are also a big part of what’s propelled this Philly gal from a challenging childhood, to a stellar student, through to her current post as Executive Pastry Chef at the Four Seasons Hotel Atlanta and Bar Margot.

Perry grew up one of eight kids raised by a single mom, and though it’s a delicate subject, I felt it was important to ask what she feels gave her the strength to overcome such disadvantages as living in a shelter for a time, and go on to build a career where her talent made her a finalist on Food Network’s Best Baker in America.

Her reply clearly conveyed her optimistic attitude.  “Yeah, we were in a shelter, but it was for just six or seven months, which may seem like a long time to some people but, I think it was clear that there are other people who don’t even have shelter, people who aren’t eating,” reflected Perry. “We were well-fed, clothed, and it wasn’t like we were literally on the street as so many others are.”

I just knew that whatever I had to do, I’d do – stay in school, stay focused. And I was lucky too, I have my twin sister and I can’t even explain how important she’s been in my life and my career! ~ Lasheeda Perry

Staying positive in the face of adversity is something Lasheeda credits for much of her success, dating back to high school, when she knew even as a young girl how important it was to excel in her education. She set her sights on college, something many take for granted, but wasn’t a given for her. Though Lasheeda got excellent grades, she worried over how to finance a higher education.

Originally aiming to be a lawyer, she wasn’t thinking about a career in a kitchen.  “Academically I was doing really well, there just were no opportunities for Law and Government students. But, word was spreading at my high school that a student received a scholarship through C-CAP to go to Johnson & Whales and a lightbulb went off!  I thought, OK if I can just get my foot through the door, even if it’s culinary school, at least I’ll be in college.”

C-CAP, Careers through Culinary Arts Program, had a huge impact on Lasheeda’s life.  Though she didn’t enter the program because of a love of baking, she admits it was just a means to get into college, she told me, “I really did fall in love with it!”

Lasheeda reflected on how C-CAP – who awarded her a full-tuition scholarship to Johnson & Wales – became more than just a means to an end.  “I was just sixteen and Richard Grausman built a relationship with me from the beginning. They opened so many doors for me. I mean, even the first time I ever got on an airplane was thanks to C-CAP! I won a C-CAP competition and was off to China! I was thinking, ‘Wait a minute, what’s happening?!”

Perry takes every opportunity she gets and runs with it, and her career trajectory reflects that.  By age thirty she was heading up the corporate kitchens at LinkedIn, through her job at Bon Appétit Management Company, an opportunity that was both personal and professional. “Once I got there I realized it was LinkedIn’s very first culinary program. Their whole concept was to nourish the minds of their professionals. It was community-focused as well, so through them I got to be involved in Girls Inc. It was awesome! I totally loved it because it gave me the opportunity to be more than just a pastry chef!”

Like any fast-rising chef, Perry puts her all into her work, yet she admits there’s a trade-off in work-life balance, something most of the industry struggles with. “I’ve been doing this since I was sixteen, so about fourteen years, and I’m finally starting to make more time for family and friends because I’m realizing how important those things are.”

Sometimes it’s just a matter of saying to myself, ‘Alright Lasheeda, your family is in town so it’s time to just stop what you’re doing at work today and go spend time with them.’  ~ Lasheeda Perry

With all the personal struggles being highlighted in the industry today, and seeing that she clearly tries hard to be her best self in the face of adversity, I asked Lasheeda what’s her advice to people when they feel like they might be sinking.  “You need to surround yourself with good people, people who understand the day to day grind of this industry. Find a mentor – and I don’t just mean a celebrity chef – I mean someone you can just pick up the phone and talk to when you’re feeling overwhelmed, and they’ll be there.”

It really helps me to have someone in my corner, keeping it real with me, even when it hurts. ~ Lasheeda Perry

As anyone in the industry knows, there’s a lot of challenges in hospitality.  Stress and long hours, sometimes unsupportive environments, and yet a love of the craft keeps people coming back.  When I asked Lasheeda how she deals with professional challenges now that she’s in charge of her own pastry kitchen, her approach was thoughtful and realistic. “For me, it comes down to taking care of my team, being transparent with them, not being afraid to talk about things. Whether it’s the work-life balance or trying to get them more money, just taking care of the staff I have here and speaking up for them is where to start.”

It’s so important to have the hard conversations, to make my team feel they can always come to me and talk to me.  And whatever happens in the kitchen or out there in the world, let’s stay positive, have fun, and keep doing what we love!  ~ Lasheeda Perry

When I met Lasheeda at Four Seasons Bar Margot, there could be no doubt she’s doing what she loves, and that she has a loyal team by her side.  Together they deliver a dessert menu that’s creative and balanced, playful yet sophisticated.  Thanks to Bar Margot, it’s not just the clientele of The Four Seasons Hotel who can enjoy these decadences, anyone can head up the grand staircase leading from the hotel lobby to the chic second floor mezzanine where Lasheeda’s delicious desserts await them, and if they’re lucky, her welcoming smile as well.