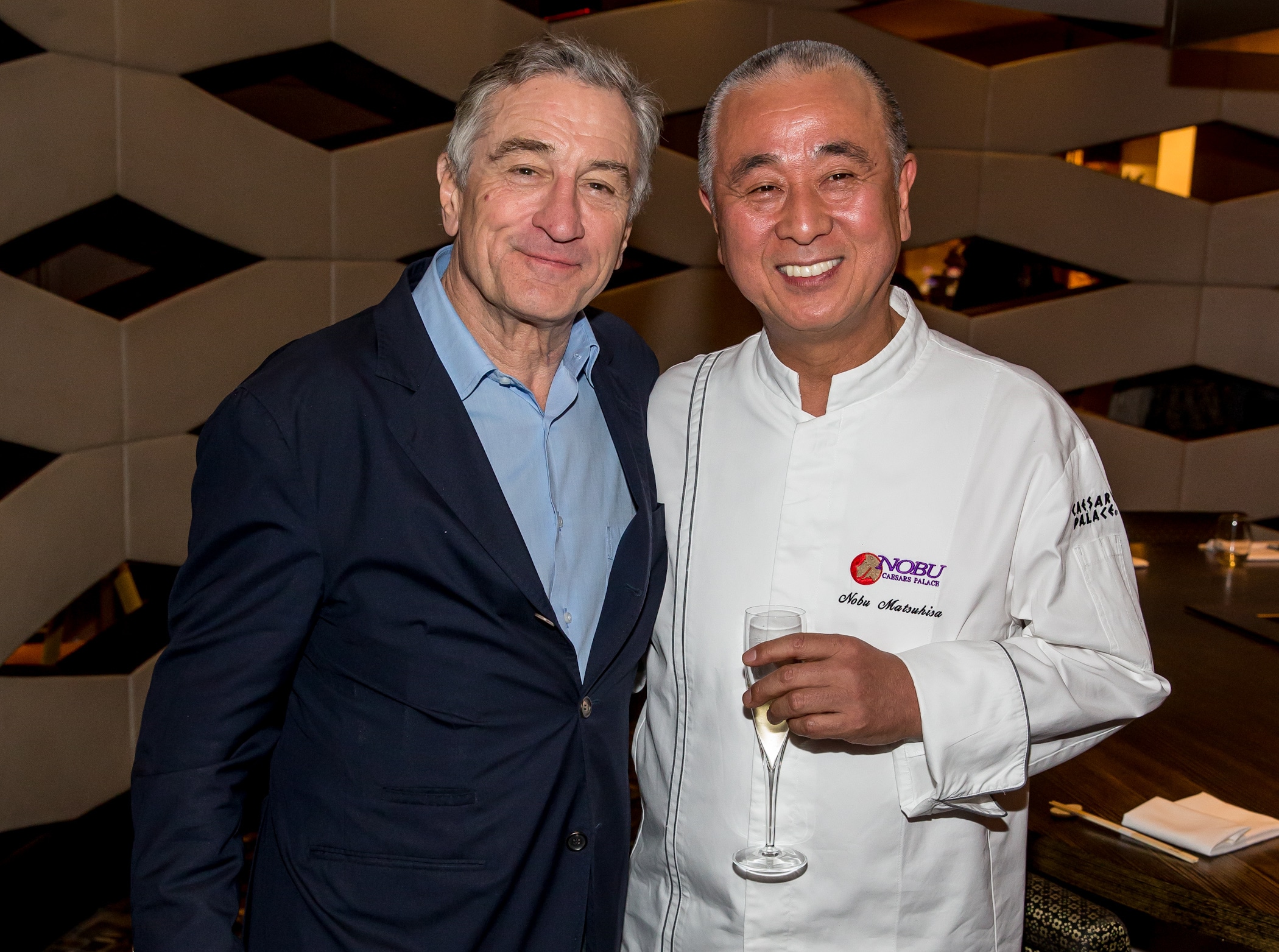 When Robert De Niro took the stage at the NYU International Hospitality Industry Investment Conference, there was barely an empty seat in the Broadway Ballroom of the New York Marriott Marquis. For those of you who don’t know, Robert De Niro is the guy who brought Nobu to NYC, and it was for Nobu Restaurants and Hotels that De Niro was joined by co-owners Chef Nobu Matsuhisa and Meir Teper for “Beyond the Boardroom” – a panel discussion led by Jonathan M. Tisch of Leows Hotels.

Background. My first apartment in NYC was just around the corner from the first Nobu in Tribeca. And Nobu Next Door, its more casual and less costly sister spot, was the first restaurant I fell in love with in the city. Not needing reservations like at Nobu, I could pop in to Next Door anytime I craved the clean, cool, creative food – which was so often that it became my hangout. I was heartbroken when it closed, and unlike the original Nobu Tribeca, didn’t reopen in another location downtown. By then though, I’d moved uptown, and was happily nestled into Nobu 57.

Beyond being addicted to the Miso Black Cod (the original that started the craze), the Rock Shrimp Tempura, Ceviche, and Yellowtail Sashimi, a secret part of me hoped to one day cross paths with Robert De Niro, who happened to live just across the street. But alas, no such sighting ever transpired, though thankfully the food and the service were both so excellent that I didn’t hugely mind.

Still, you can imagine my excitement when I was invited to attend the NYU International Hospitality Industry Investment Conference, where none other than Robert De Niro would be on stage talking all things Nobu with his partner the legendary Chef Nobu Matsuhisa. The energy during the pre-panel lunch in the Broadway Ballroom was high, clearly I wasn’t the only one buzzing in anticipation.

Trouble was, I was pretty damn far from the stage, as the up-front tables were all reserved – and not for press. So I pulled a fast one when the lights dimmed, ducking out of my place, stealthily edging the perimeter of the ballroom, and sneaking into one of the few empty chairs at a reserved table in the front row, where the impeccably dressed gentleman presiding over the round table nodded graciously in assent of my silent solicitation for a seat. That’s hospitality for you!

The discussion took us back to the beginning, back to when De Niro discovered Nobu’s cooking. He recounted, “I was in LA, and a friend took me to Matsuhisa, the original restaurant. I had just opened Tribeca Grill in New York, and I said to Nobu, ‘If you ever want to open a restaurant in New York City, let me know.’” De Niro looked to Nobu and said, “I just knew it would be terrific, I’d never experienced anything like his cooking.”

Even for a huge star like Robert De Niro, coming up with the funding for the new restaurant was challenging. He explained, “When I was trying to get investors in Nobu…” De Niro shrugged and turned towards the audience, “even with all the people that I know, it wasn’t that easy!” He laughed and looked nonplussed, we all laughed with him, and I wondered to myself, who the hell would say no to De Niro? He may well have been thinking the same thing.

Today, those who declined De Niro’s invitation to invest back in 1994 must be kicking themselves black and blue. Fortune Magazine estimates Nobu Hospitality LLC will reach $1 billion in revenue by 2023, While Jonathan Tisch pointed out during the panel that according to Forbes, Nobu is the most Googled brand in the world.

De Niro eventually did raise the necessary funds, which, combined with his own hefty input and that of partner Meir Teper, made it possible to launch the stunning multi-million dollar space that built the brand.

Tisch asked De Niro if he was nervous to start such a lavish restaurant all those years ago in Tribeca, when the neighborhood wasn’t the lap of luxury it is today. In his casual, confident style, De Niro didn’t flinch. “Well it was just a place that I’d decided to live. I first went down there to set up a gym for Raging Bull but then I didn’t end up doing that, I just went to another gym which was more easy. But I lived down there and so when we decided to start Nobu, we found this space that just happened to be right across the street from my house, so that was convenient.”

More laughter from De Niro, the panel and the room, as he continued, “Sometimes I’d put an order in and then I’d ask the waiter to come across the street and just put it in my elevator.” To which Tisch added, “So you were like the first Caviar!” Referring to the elite NYC food delivery service.

Today the Nobu brand is synonymous with stellar culinary quality, super high standards of service, and stunning spaces. As Matsuhisa pointed out, it’s because they built the company the right way from the get-go.

“Since I created my style of cooking in 1987 in LA, and then brought it to New York, we kept growing, and a lot of people started working for us. So we grew as a family. We worked as a family. We knew the quality we wanted. Now we are so big, and I travel about ten months a year, just so I can go and sit down with everyone. If they have problems, I can help them, and we work together face to face.”

Nobuyuki – aka “Nobu” – Matsuhisa, exudes an air of innate calm and joyousness, and it’s his spirit that he brings to the operations, a positive energy that he imparts throughout the organization. “Doing a good business, good team work, it’s kind of like it comes naturally to me. I like always to make the people happy. Everyone from the host, the managers, the servers, everyone makes the people happy.”

Then they got into hotels. Tisch asked the partners what inspired the move, which, Nobu himself noted, “is a much bigger operation that restaurants.”

De Niro fielded the question. “I actually started asking myself questions. Why are we always in hotels? To give them a sort of credibility as a restaurant? Why are we asking, or being asked, to go into these places? Why don’t we do it ourselves? Since we’re lucky enough to even be in this position. And that’s kind of how it got started.”

There was a lightbulb moment though, for De Niro at least. He shared with us that, “One time we went to a Hard Rock to open a Nobu in San Diego, and people kept asking questions about the Hard Rock. We said, ‘We’re not here for the Hard Rock, we’re here for Nobu,’ So that also crystalized my feeling of why are we not at least trying hotels?”

Jonathan Tisch chimed in, saying, “You guys make it look so easy, but it’s not easy!” At which point, the third panelist and founding partner Meir Teper took over.

“Bob and I were always talking over the years, we stay in so many hotels, and we always shared what we liked and didn’t like. So when we got into hotels, we had an idea of the things we would do, the amenities, the design, all the things we liked. We didn’t have experience building hotels but in a way, it was easy! We are known in restaurants as giving good service and good food, so we just did the same thing in our hotels. Good service, good food, and a comfortable place to stay.”

Nobu Hotels are a fair bit more than just a “comfortable place to stay.” They’re stylish stages upon which travelers can play out their far-flung fantasies. They’re super cool, and each property reflects not only the locality, but the energy and feel that’s distinctly Nobu.

Counting off locations on their website, Nobu Hospitality has 47 restaurants and 10 hotels, and while they continue to build, they do so at their own pace. As Teper pointed out, “We’re not a public company so we don’t have the pressure to, say, open ten restaurants a year or we’re a failure. So we just do things when we see the right location, the right place.”

Still, as Jonathan Tisch, a third generation hotelier himself, emphasized, there’s still a lot of pressure in the business. Yet none of the Nobu founders seems to be caving under it. They see their growth, and their success, as part of a philosophy of teamwork.

“We are a team,” mused Teper. “A good team, and we don’t do anything by ourselves. We have great people all over the world, and many have been with us a long time, some since the beginning, so we are like a family. That’s really the secret. Keep them close to you and treat them nicely. That’s how we are able to keep the quality and to grow.”

As they continued to talk about the pressures of growth, maintaining high standards, finding the right investors, and near-constant globe-trotting to show up at the properties, Tisch turned to De Niro and said, “And at the same time, Bob, you keep your career as an actor going!” A cool De Niro smiled slyly in reply, “Yeah, it’s my day job.”