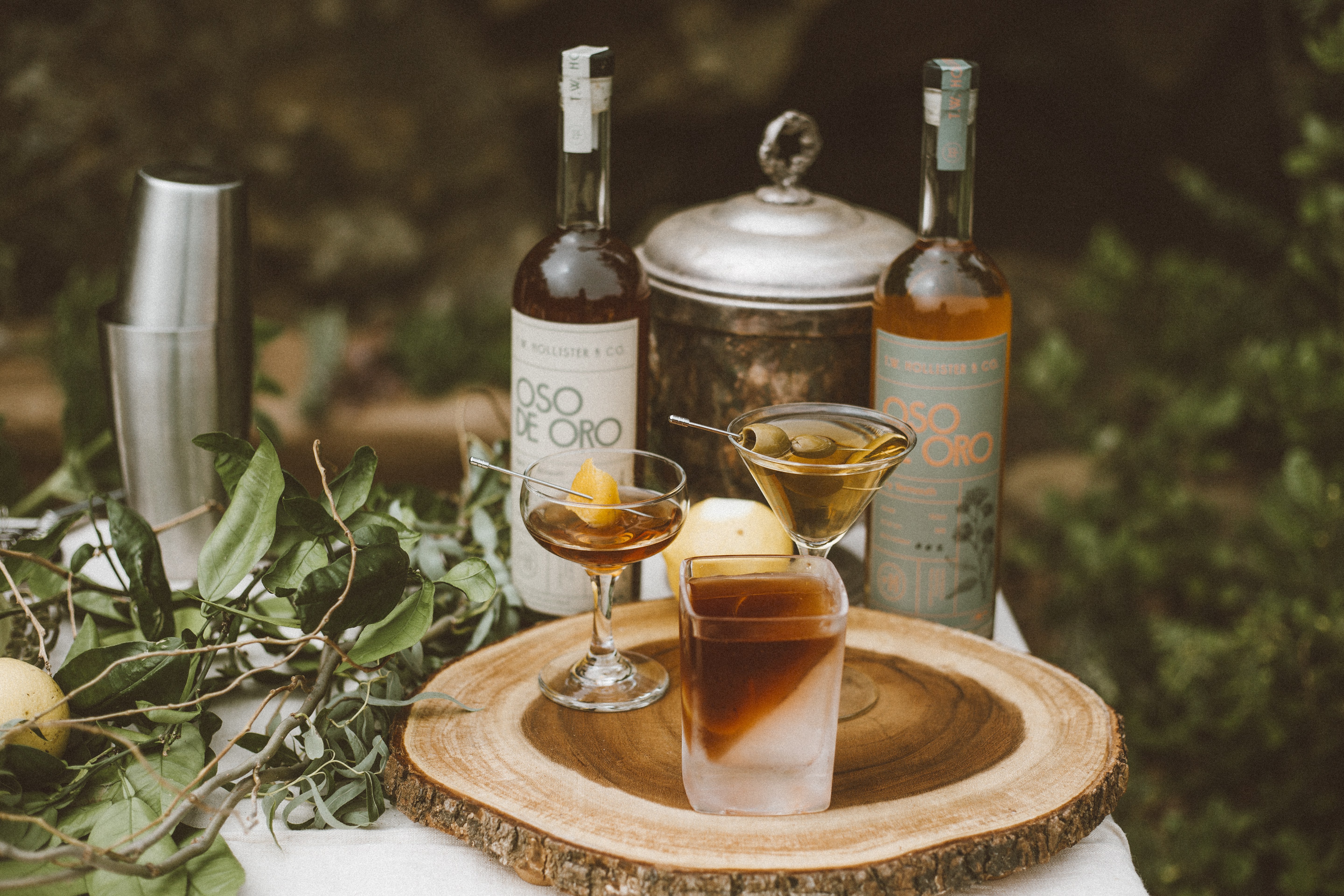 I have to admit that for many years, especially during my 20s, my only experience with vermouth was drinking it in an extra dirty martini, preferably with blue cheese olives. I never really gave vermouth much thought and I certainly didn’t think twice about its quality. Apparently I wasn’t the only one; until more recently, the majority of Americans were a bit clueless about fortified wines, despite the historical significance fortified wines like vermouth have played in European culture—both as a medicinal concoction and a pre-dinner staple (known as an apéritif).

Today, my older, wiser self wholeheartedly appreciates the art of the cocktail and not only do I recognize that quality ingredients can truly enhance an alcoholic beverage, but I also know that some things I once only considered a “mixer”—like vermouth—can be equally enjoyable on its own. So when I first heard about T.W. Hollister & Co.’s California-made Oso De Oro vermouth, I was intrigued.

I knew of a few wineries in Northern California playing around with vermouth, but I hadn’t heard of anyone making it in Santa Barbara County, where I’m from. And, since I follow the eat local mentality (what can I say? I’m a true California girl), why shouldn’t my apéritif choices follow suit? A locally-made vermouth sounded worthy of trying. But a locally-made vermouth that sources ingredients locally and actually tastes good, too? Sold.

T.W. Hollister & Co. was founded by Clinton and Ashley Hollister, a husband-and-wife team who, drawing on the Hollister family’s deep roots on the Central Coast, created their brand to capture the wild west spirit of California’s early days while honoring family and tradition. “T.W. Hollister & Co. is built upon the principles of family, integrity, conservation and discovery,” says Clinton Hollister. “From the start, our goal for our vermouth has been to highlight the untamed energy of the west, when California was creating its cultural identity—the same time my ancestor, Colonel William Welles Hollister, settled here—while crafting something that felt authentically Californian and avant-garde in spirit.”

To bring their idea to fruition, the Hollisters focused their attention on the ingredients available to them on the Central Coast and hired winemaker Carl Sutton, an industry veteran who started his winemaking career in Sonoma’s Russian River Valley. Using a base of white wine made from fruit sourced in the Santa Ynez Valley, both of T.W. Hollister’s Red and Dry Vermouths are then infused with a unique blend of organic botanicals and herbs—some 25-30 different ingredients, in fact.

To capture the essence of California in each bottle, many of these ingredients are sourced locally, including blood oranges from an organic orchard in Ojai, unfiltered honey from the Gaviota Coast, green coffee beans from an organic farm in Santa Barbara and Hummingbird Sage that is wild foraged from throughout the 13,000-acre Hollister Ranch.

“Sourcing local ingredients whenever possible—even foraging native botanicals from our family ranch—not only falls in line with our company’s locally minded ethos but also furthers our intent for each bottle to be a reflection of the land our family has called home for generations,” shares Clinton. “We want every bottle of our vermouth to celebrate the unique characters of California, but it’s also equally important to us to contribute back to our community by supporting small and family-run businesses.”

This mindset is why the Hollisters have chosen to source as close to home as possible, even potentially partnering with a local urban farm to grow different types of wormwood—a key ingredient in their vermouth that they currently source from Sonoma County—in hopes they can keep ingredients hyper local.

Of course, the team recognizes it’s not possible to source 100% from the region, simply due to the fact that certain ingredients just won’t grow in California or those ingredients would require too many resources to produce here, thereby going against the company’s desire to keep sustainability at the forefront.

People often care about where meat, dairy or even beer comes from, but it’s easy to reach for spirits or fortified wines without thinking too hard about the way it’s made or concerning yourself with the company’s business practices. So there’s something to be said about supporting a small spirits company that cares enough about the environment to takes the extra steps.

“Being responsible for the environment isn’t a choice to us, it’s a responsibility,” says Ashley Hollister. “We’d love for everything to be produced in California, but since that’s not entirely feasible, we are taking the steps to reduce our footprint. Ultimately, we’re not just in the business of making vermouth, we’re in the business of cultivating a more sustainable environment.”