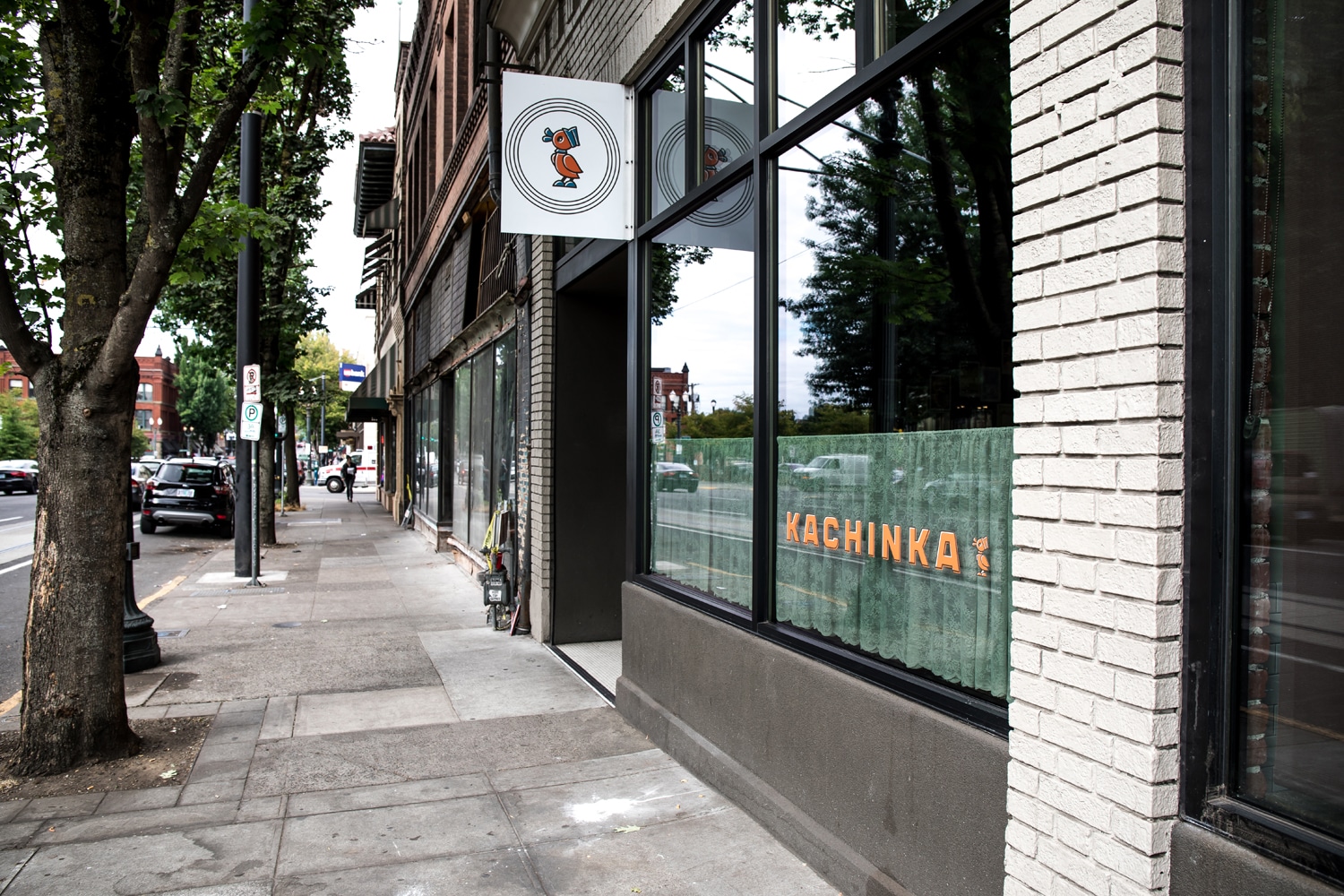 Someone carved a swastika in the bathroom mirror at my restaurant, Kachinka, in Portland. It happened on a Saturday, and truth be told, it wasn’t until Monday that I even accepted what had happened; playing it down to myself as a type of coping mechanism. But that Monday, as I parked around the corner, it hit me and I just couldn’t bring myself to walk back in those doors unless I made the incident public. If I didn’t talk about it, then it basically never happened, and the thought that this swastika would disappear without a trace was even scarier than the swastika itself. Is this something that was happening elsewhere and people were just quietly cleaning it up and moving on? Is that what I was supposed to do?

In an effort to get the word out that day, I took to Facebook. The outpouring of support was genuinely breathtaking. But something interesting happened: a lot of really well-intentioned friends, people I deeply respect and love, said things along the lines of, ‘Don’t worry about it, it was probably just some kid that didn’t know what they were doing.’ And I started to realize that this sort of assumption of innocence on the part of the vandal, seemed to be part of the problem. How did we get here? To this place where the assumption is that such an incident is isolated, insignificant, normal.

My brother, amplifying my apparent innocence said, “So, I see swastikas carved into bathrooms stalls all the time.” My brain exploded! Really?!? But more and more acquaintances shared similarly nonplussed expressions when I’d retell the event. Shouldn’t we be up in arms every time we see something like that?

A friend suggested I file a report with the police department and the Anti-Defamation League. With the first report, the police officer said, “I really do think this is a hate crime but it’s not up to me. They make that decision back at the office and they are rarely classified as hate crimes.”

If I didn’t talk about it, then it basically never happened, and the thought that this swastika would disappear without a trace was even scarier than the swastika itself. ~ Bonnie Morales

A couple of news stations asked for me to speak about it on the evening news. Which I obligingly did, knowing both that it was the right thing to do and that it would cause unwanted attention. The latter came in the form of a copycat swastika, this time carved on the bathroom wall. It was as disturbing as a three-foot-tall-symbol-of-hate-and-desire-to-exterminate-a-race tends to be and our manager working that day snapped a photo and then hastily painted over it.

When a different police officer arrived the following morning, the swastika was obscured by the paint but still visible, plus there was the photo. The officer looked me in the eyes and said he just didn’t see a swastika there. I was dumbfounded. We debated for about 10-15 minutes until finally I put the photo in his face and traced the glyph saying, “How can you tell me that you don’t see a swastika in this photo?!” I was shaking with rage and fury. He stuttered a bit and then, “Oh! I guess now that I look at it again, I guess I do see how it could be a swastika.”

Further down the rabbit hole. That’s what I thought when this happened. After two police reports, for two very intentional swastikas on my very real restaurant, I have to say that the way the police handled this is what hit me hardest. First go around: complacency. Second: gas-lighting.

I need to circle back to this whole “hate crime” thing. I am Jewish and have been pretty open about that. We regularly do specials for Jewish holidays, our restaurant is named after a WWII survival story, etc. Someone took the time to diligently carve a swastika into a glass mirror. A mirror. Not just hidden on the door-frame or under a shelf as many vandals do. Front-and-center on a reflective surface so when you look at yourself, you see this symbol on your chest or face.

To say that I felt personally threatened by this act is the understatement of the year. I felt terrified. I still feel terrified. I look over my shoulder when I walk alone. I assume this person will be back and will do more next time. Every time our alarm system is tripped (which often happens for benign reasons) my brain flashes to broken windows a la Kristallnacht. But because some pencil pusher at the police station stamped “no” – or whatever – it’s not a hate crime? Why does he get to say? Where does it end?

At first, every person who walked through our doors was a potential white supremacist in my mind. I had zero faith in anyone. I didn’t want to feed anyone or be hospitable. This is obviously not the right response, but it’s just the natural one I had. Now that time has passed, I’ve mostly returned back to normal, but there’s still this feeling that I see a sort of asterisk over everyone – like “you are probably cool, but what if…?”

To say that I felt personally threatened by this act is the understatement of the year. I felt terrified. I still feel terrified. I look over my shoulder when I walk alone. ~ Bonnie Morales

There’s a nourishing essence to what we do as restaurant owners. We want to take care of people. Maybe not everyone gets into restaurants for that reason, but most everyone I know does. At Kachka and Kachinka a memory or a relative inspires nearly every dish so it’s literally my big fat stupid bleeding heart on every plate. I probably shouldn’t invest myself that way in a business. I’m sure some white dude in a suit would tell me that isn’t profitable and that I could make more money if I was more detached. But I can’t. For me it is so deeply personal. The person who did this was somebody who we fed and took care of. They ate my very Soviet Jewish refugee food and then desecrated it. It leaves you raw and broken.

My parents left the Soviet Union because of anti-Semitism. Belarus lost 25% of their population because of World War II…and it was mostly Jews. Both sides of my family barely survived by sheer luck and then they had to deal with Stalin who hated the Jews just as much as Hitler. They have known anti-Semitism first hand and would talk about it frequently so my brother and I would know what we escaped by coming to America. Living in comfort in the very Jewish north suburbs of Chicago, I just rolled my eyes. “That doesn’t apply to me here,” I’d coolly think.

When I was eight or so, there was a Holocaust memorial that was vandalized with swastikas all over it in Skokie, IL near where we lived. My parents were really upset and I just thought, this is America, it doesn’t mean anything. Whatever history and feelings they had about it, it didn’t apply here. We are safe.

This isn’t just about Jewish people though, and I want to make sure the lens isn’t that narrow. It is my experience but it’s not unique, unfortunately. ~ Bonnie Morales

I’ve been remembering those moments a lot lately. As often goes, my parents were right, and I was naïve. It is 2019 and we are no safer now than we were then. My children’s Hebrew school has us write little notes of encouragement to put in emergency care packs in the event of a terrorist attack on the school. The very act of writing such a thing had me seriously consider pulling them out.

Obviously this isn’t just about Jewish people though, and I want to make sure the lens isn’t that narrow. It is my experience but it’s not unique, unfortunately. Instead of worrying just about what’s happening in our own backyards, we need to take care of each other.

People are also often surprised that something like this would even happen in Portland. It is known as a very progressive city that is very welcoming to all. And this is true, however, the Northwest has a pretty scary history as far as white nationalism goes. There are a lot of people who moved here back in the seventies and eighties because it was mostly uninhabited and they wanted to start a new life and re-establish a “perfect” race. If you are in disbelief I suggest you look into the “Northwest Territorial Imperative.”

In recent years, these previously suppressed factions have been feeling empowered and emboldened. Carved swastikas in mirrors and more. So the next time you catch yourself thinking ‘it was probably some kid who didn’t even know what they were doing,’ think again. And act. Report every instance to the Anti-Defamation League. Shout from the rooftops. Stomp and scream. Don’t sweep these actions under the rug because it’s ugly and inconvenient.

We have to fight for what we have. We can’t take any of it for granted. We have to have these conversations. We have to be completely aware. And sometimes, we have to stand up to the officer who doesn’t see the swastika on the wall.

Bonnie Morales is the Executive Chef /Co-Owner of Kachka and Kachinka, and author of Kachka: A Return to Russian Cooking. She was previously featured on CulEpi in Influence of Eastern European Immigrants Colors America’s Dessert Landscape by Meryle Evans