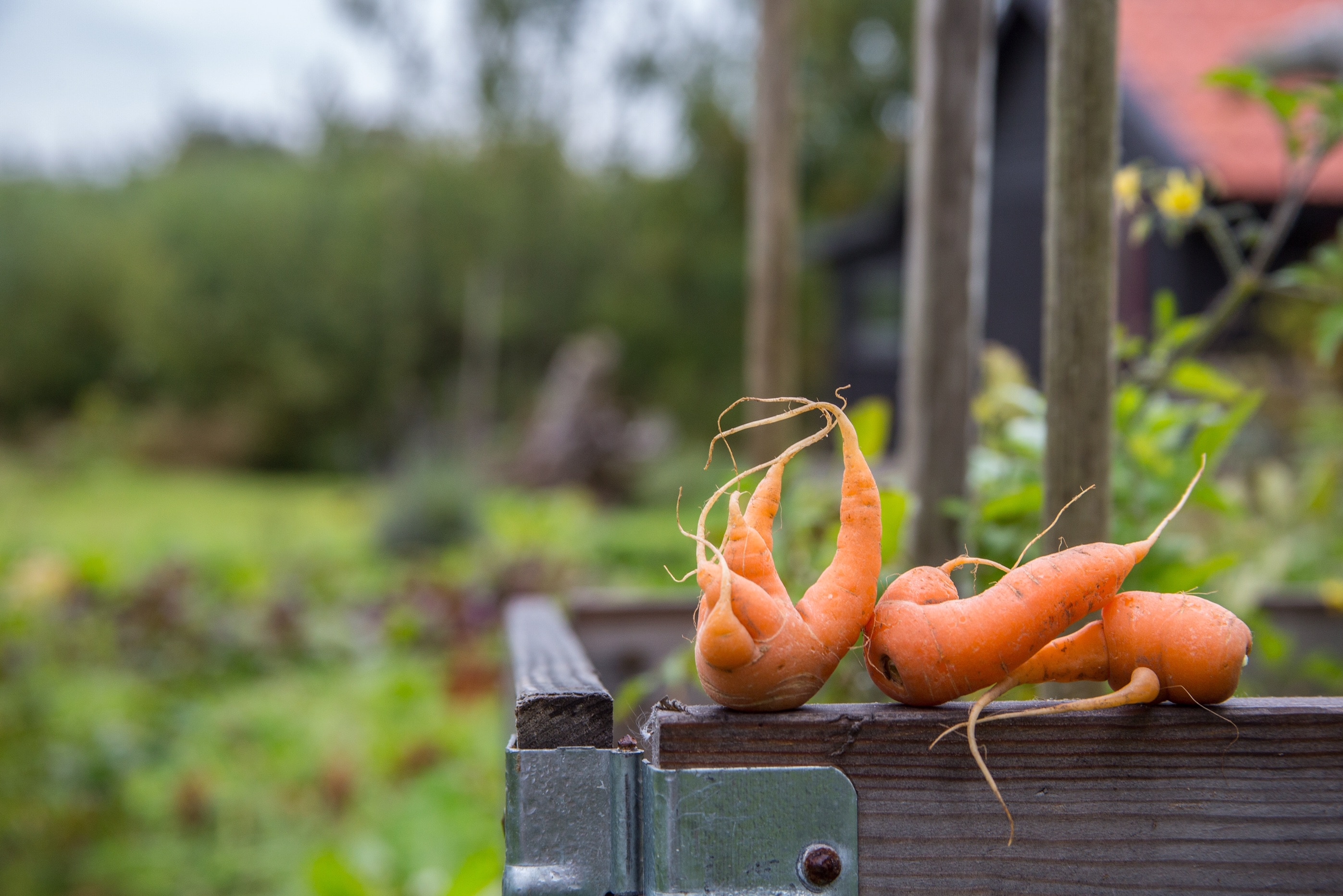 Anyone who gets excited by the word “sustainable” has probably heard of the popular subscription boxes behind the rise of the “ugly food movement.” Companies like Hungry Harvest, Imperfect Produce and Misfits Market claim to buy and deliver farmers’ “ugly” produce, the edible fruits and vegetables that would’ve rotten in landfills due to cosmetic imperfections that grocery stores won’t accept. By shipping this ugly produce directly to consumers, the boxes aim to tackle our massive food waste problem (the US wastes about 40% of its food, or 63 million tons, every year).

As someone who cares a lot about food waste (I even wrote about it last year), these boxes sounded like a great idea. Don’t dump that tasty produce, just bring it to me! Those apples might have weird scars and bumps but I’ll still love them! And yet, the more I’ve looked into these subscriptions, the more criticism I’ve found that these companies may by falsely leading customers to think they’re making a smart and ethical choice. Are ugly produce boxes little more than a Band-Aid on a $218 billion dollar problem?

Dr. Sarah Taber, a crop scientist, caused an uproar on Twitter last month by claiming that the ugly food problem isn’t what we think it is. “As someone who works in produce, this whole ‘ugly fruit’ movement is actually kind of enraging bc [sic] it’s completely disconnected from what really happens in the supply chain,” she Tweeted.

We tend to think that after produce is harvested and sent to packinghouses where they’re sorted and examined, that’s where ugly food gets tossed out. But naturally, farmers want to get as much use out of what they’ve grown as possible. According to Dr. Taber, if they don’t meet grocery store standards, the surplus, or “ugly,” produce can still make a smaller profit when used in processed food products or when bought and sold at grocery stores in low income areas, which tend to have fewer cosmetic restrictions in favor of cheaper produce. Otherwise, farmers can get rid of unsold surplus by feeding it to livestock, composting or donating to food banks.

“In order to believe that retail consumers can change the world by buying ugly fruit, you have to believe that the entire supply chain is made of numpties who make a regular habit of leaving money on the table,” wrote Dr. Taber in the same Twitter thread. “The food system is a hot mess but using ugly produce is one thing it’s actually really good at.”

Farmers do have other outlets for their ugly produce, but the system doesn’t work as efficiently as Dr. Taber says it could. According to the 2016 ReFED report, 10.1 million tons of food is wasted at the farm level every year. Why is that?

With already thin profit margins, not all farmers have the resources or opportunity to make the most out of their product in a way that makes financial sense. If they see that the crop in the field is slightly damaged but still edible, it might not be worth it to harvest and sell at a steeply discounted price. It makes even less sense to spend time and labor to harvest a crop for donation. Perfectly good and profitable crops could be left to rot due to labor shortage, an ongoing issue given ever-changing immigration and work visa policies. Farms are depending more on mechanical harvesting instead, but their equipment isn’t perfect, leading to damaged or missed crops.

Transportation costs are a huge factor for small farms that can’t afford to send their surplus to donation sites.  When a crate of produce that a farmer thinks will meet a grocery store’s standards is rejected, it’s too costly to drive the produce back so the crate is left behind to rot. Ugly produce is especially difficult to transport, as the irregular shapes and damaged skin can cause bruising and rotting.

In an article by The New Republic, Imperfect Produce founder Ben Simon and Hungry Harvest founder Evan Lutz both said that a portion of their rescued produce is sourced from Big Ag, the large-scale industrial farms producers like Dole and Driscoll’s. While that portion is small, it shows that these boxes are not supporting small local farmers to the extent that customers assume, and Big Ag tends to overproduce their crops–one of the biggest factors of food waste on the farm level–to meet the high quality and volume demands of supermarkets.

Simon also stated that about 5 to 10% of the produce they rescue was not going to be wasted at all. “We’ve been transparent from the beginning that a small portion of the produce we buy may have had a previous market,” he said. All Hungry Harvest produce was going to waste according to Lutz, but farmers don’t have to be completely transparent with the company on their practices. In fact, one farmer in the same article revealed that most of the food they’ve rerouted to Hungry Harvest would’ve been donated to food banks.

This is the ugly food movement’s biggest problem and the source of its controversy. There’s no denying that the boxes help struggling farmers make profit off their surplus, and more whole fruits and vegetables can go to people’s fridges instead of canned food or livestock. But is the surplus going to the people who need it most?

Many people are stranded in “food deserts,” areas without convenient and affordable access to fresh groceries (more in a previous CulEpi article here). It often doesn’t make financial sense for farmers to transport their produce to the most economically disadvantaged, even the ugly food, if it can survive the long journey. The produce boxes can’t be the solution to food insecurity when many companies only ship to select zip codes in major urban areas; in other words, to the people who can choose to buy ugly food in an attempt to be eco-friendly.

Critics doubt that venture-capital backed, for-profit companies could, by definition, do what’s best for the people when they also need to watch their revenue growth. “Imperfect Produce reflects a very troubling trend that is undermining local, small-scale farmers and food justice initiatives, a trend that commodifies and gentrifies food waste,” wrote Phat Beets Produce in an op-ed. Phat Beets is a food justice collective in North Oakland, California producing a CSA (community service agriculture) that directly connects local farmers with consumers in need. Their CSA saw a 30% customer drop once Imperfect Produce came to the neighborhood. “This produce used to be readily available to food banks but now that ‘ugly’ and ‘imperfect’ produce can turn a profit, they are less available to those in need.”

In his response to the op-ed on Imperfect Produce’s blog, Simon highlighted their Reduced-Cost Box Program which gives 7,000 SNAP eligible families an extra 33% off every box. “We lose money on all these orders, but do it because it’s the right thing to do and because we believe passionately that nobody should be priced out of good food,” wrote Simon. “We’re proud that in the 10 cities we serve along the West Coast, Midwest and Texas, our program is often the most affordable way to access fresh produce.”

Imperfect Produce may be contributing to the decline of community supported agriculture, but it still works for some people who, for whatever reason, need the access that their produce boxes deliver. Not everyone wants to get all their groceries from the food bank due to stigma or a lack of variety and choice. These boxes are helping us change our perspective on ugly food, that there’s no shame in getting less than perfect fruits and veggies at a discount. Maybe more companies could learn from Misfits Market, which doesn’t work with any Big Ag farms and delivers to every zip code in the states they service. They have the potential to do good work, but many ugly produce companies just won’t be able to do it all.

If you’re wondering what you could possibly do to to help the situation, know that we don’t have to start a revolution just yet. It’s important to keep in mind that the majority of food is wasted at home, not on farms. American households waste 150,000 tons of food every day, mostly fruits and vegetables, which we can avoid by shopping smarter and smaller. There’s no use in putting an end to waste at the farm level if we continue to let broccoli go bad in the fridge! The controversy on ugly food will rage on, but there’s plenty of choices we can make in the comfort of our homes, whether or not it involves a subscription box.