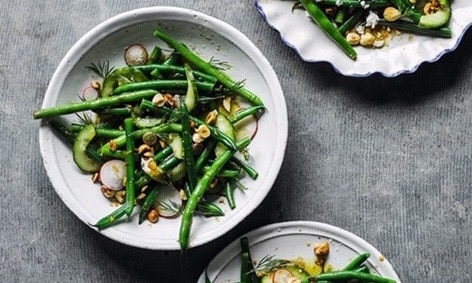 Lebanese chef and cookbook author Salma Hage has perfected the art of sharing through food, and in The Mezze Cookbook: Sharing Plates From The Middle East, her readers embark on a journey of mezze recipes that are approachable, and make you want to gather your friends and family for a mezze party.  In my Q&A with Hage, we went beyond her cookbook and touched on topics ranging from her childhood in the mountains of Lebanon, to migrating to London where she worked hard for a better life, to becoming a well-known author.

Growing up the eldest of twelve, it’s no surprise that Hage would learn how to share – and to cook for a lot of people – at an early age. “I would always help my mother in the kitchen,” recalled Salma.  “Being the eldest of twelve children meant that I had little choice but to become a second mother figure to my siblings. I have siblings younger than my own son, so it is all a bit mixed up, I guess like a mezze.”

Despite a deep connection to her family and the village where she grew up, she moved to the city of Tripoli, but she faced unexpected challenges there. “It was a difficult time politically and economically, there was also very little opportunity for employment.”

Living in Tripoli was becoming unsafe, so she turned to family in England for help.  “My Aunty Hannah, who was really a second Mum to me, was living in Wimbledon, London, and lent me the money for the flight to bring my son and husband over.” Salma didn’t speak a single word of English when she arrived in London, and all she could afford was a tiny one room flat, so she was determined to create a better life for herself and her family.

We all lived in one shared room for many years. We ate, bathed, and slept all in one room. We thought that was very tough, but you find a way. Looking back now I have such fond memories of us all being together in that way.

Eventually Salma and her family got a two-bedroom, but, she said, “I began renting the other room out to lodgers to earn a bit of extra money to feed my family. So we still had just one room for us, but at least we could afford to eat and buy some clothes.”

In order to make ends meet and work towards a better future, Hage turned to what knew best, cooking.  “For me, there was never a light bulb moment of being inspired to ‘become a chef,’ it evolved slowly over time. First it came out of necessity of having to care for my family, then I needed to develop my technique to earn a living from it.”

Over the course of this journey I fell in love with cooking. Now it is what keeps me getting up in the morning. It is my raison d’être.

Coming from a culinary background where sharing plates is common, she had to adapt to the UK’s way of cooking. In 1960’s London, where a meat and two vegetables were the norm, Hage would soon have to “unlearn the mezze style of eating.” Having worked her way up through the kitchen to land the Head Chef position at a large catering company, Hage found herself working in a hospital setting.

Working in hospital kitchens meant I had to turn out a lot of individual meat pies and fruit pies. You couldn’t get further from the style of cooking I had been used to growing up in Lebanon.

Salma said her family are “predominantly vegetarians.”  So for her, cooking at home and developing recipes for her cookbooks “has been a wonderful way to reconnect with the dishes of my youth when there wasn’t that much meat around.”

As she improved her professional skills as a chef, this impacted the way she cooked at home.  Eventually she had enough confidence, inspiration, and well-tested recipes from herself and her family to write her first cookbook, The Lebanese Kitchen.  Released in 2012, The Lebanese Kitchen was a huge success and received high praise. Its 500 recipes went way beyond what Brits thought of Lebanese cuisine, and drew on the foods of her family and her childhood.

The Mezze Cookbook also sprung from her Lebanese roots, while embracing the needs of today’s busy home cooks. “To my mind, mezze is a brilliant way of eating; many of the dishes can be prepared in advance (quickly, I might add), and the food can be mismatched to suit every dietary requirement from the same table so it never feels exclusive.”

I wanted to create a book that was faithful to the way I cook and eat but also reflective of the modern world.

Salma Hage has made a successful life for herself in London, embracing its global food scene and loving its diverse specialty food shops, yet it’s safe to say she hasn’t left her roots behind in the mountains of Lebanon. When I asked her what was her inspiration for writing The Mezze Cookbook, her answer made this clear. “My family was probably my biggest inspiration. We are a loving bunch of lots of different generations and tastes, and I always like to offer them something to eat when they come to my house. So this book is really an extension of lots of happy meals shared together.”