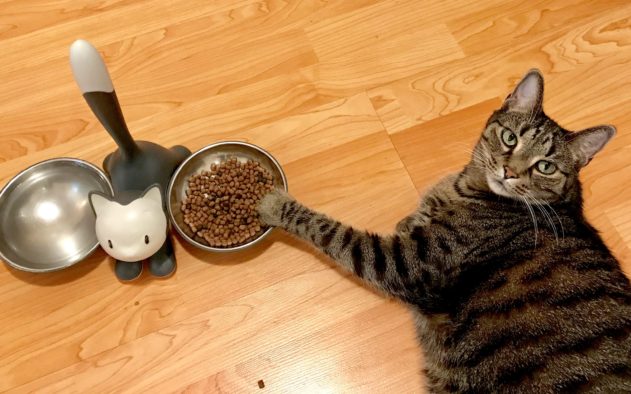 People in the culinary industry care a lot about food and farming issues, so it makes sense for the industry to think about these concerns as they relate to what our pets eat too. As we know, when our country moved away from small independent farms and shifted to large corporately-owned operations, the quality of our food supply decreased drastically, resulting not only in dire health consequences for humans, but also for our four-legged family members.

If you eat animal products – and most of our cats and dogs do – then you’re right to care about what farm animals are being fed. After all, we are what we eat eats.

Much of this will be stored in muscles, organs, and fat which is then consumed by our pets (and by humans). In addition to all of these noxious ingredients in livestock feed, these animals are also the largest consumers of GMO’s. And, food labeled for animal consumption does not need any type of identification as to whether there are GMO’s in them or not.

Besides the open-ended question as to whether GMO’s may have long-term health consequences, which have yet to be identified, these plants are usually heavily sprayed with Roundup™. We now know that glyphosate, the active ingredient in Roundup™, has been proven to cause lymphoma in humans. Lymphoma also happens to be one of the most commonly diagnosed cancers in dogs. Is it possible that consuming this chemical in their daily bowl of food could be a contributing factor?

When thinking about what our farm animals eat, we may forget that the plants we – and they – eat, also ingest substances. We are exhorted to wash our fruits and vegetables prior to eating, and this is a wise practice. However, if we believe that this removes all traces of pesticides, fungicides, weed killers, etc. we would be mistaken.

Intensive farming of field after field of single crops like corn, wheat and soy creates a larger pest problem requiring more frequent spraying with pesticides. GMO’s may or may not have cut down on the amount of pesticides. The jury is still out on this as some insects appear to be evolving. One thing is certain, the amount of weed killers being used has dramatically increased due to the resistance of GMO plants to weed killers.

Besides absorbing chemicals through the skin, these soil contaminants can be pulled up through the root of the plant and stored within the body of the plant that you later eat. When thinking about the manufacturing of our pet’s food; it is highly unlikely that most manufacturers actually wash the produce in their formulas. This leaves your pet exposed to the externally sprayed toxins as well as what might be inside the plant itself. So unless it’s organic, even plant-based pet foods can be toxic.

Our food supply is controlled by a few large corporations who have selected the foods we eat, and that of our pets, with profit margin and shelf-life as two of the most important factors. Corn, wheat, and soy are the most abundantly farmed crops, more often than not they’re GM crops, and some derivative of one or more of these appears in most, if not all, processed pet food.

Fortunately, it’s not all doom and gloom as we can make choices for our pets that minimize their exposure to unhealthy foods. We can look for organic pet foods, as well as pet food that doesn’t contain animal “by-products” or “meal,” and has no corn, soy or wheat (as these are often non-organic, GM foods). By choosing our pet food as carefully as we choose our own food, we can put financial pressure on the current system to implement more sustainable forms of agriculture and animal husbandry. This, in turn, creates a healthier planet for our beloved pets, and ourselves too!