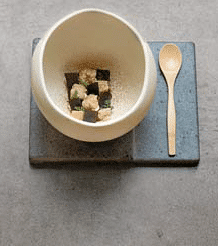 Like Claus Meyer and René Redzepi in Denmark, like Ferran and Albert Adrià in Spain, Chilean Chef Rodolfo Guzmán is a visionary in the truest sense of the word, and his vision transformed the way his country thinks about its culinary heritage – as well as the way the culinary world thinks about his country.  Sitting at Number 27 on The World’s Fifty Best Restaurants 2018, Guzmán has indisputably turned the tables on the critics who once shunned his Santiago restaurant Boragó for using indigenous Chilean ingredients.

As a restless young cook in Santiago, Rodolfo Guzmán did the only thing he could do at the time to broaden his horizons, he went to Europe. “Someone in the kitchen where I was working asked, ‘Hey Rodolfo, have you heard what’s going on in Spain, in the Basque country?’ I said ‘No.’ Then he told me ‘It’s a revolution that’s going on there!’ And I thought ‘Oh! This is my opportunity!’”

He started making calls to get into some top kitchens in Spain, to no avail. “Nothing came through for me, I was just some cook from Chile, so I just went there and started knocking on doors until I got some stages.” One of those restaurants was the famed Mugaritz. “For me, Mugaritz was something special, really special, and I had the chance to keep going with my career there, but I decided I wanted to come back to Chile to do my own thing.”

When he returned, frustration started setting in as he worked his way around the top kitchens in Santiago, finding little room for the creativity and ingenuity he thrived on at Mugaritz, and even less room for the native ingredients of Chile. “Chilean food and ingredients were not important to us as a people. Chileans wanted imported ingredients… truffles, prosciutto, Japanese fish… It wasn’t anybody’s fault, we are a new country and it’s all part of the process to value your own heritage.”

By age twenty-eight, Guzmán saved up a bit of money and decided to open his own place, a restaurant that would use indigenous ingredients that had to be foraged because you couldn’t get them any other way. He went to the Mapuche tribe, shared his vision with them, and embarked on “a ten year process of learning.”

It’s clear by the way he speaks, with energy and intensity, Guzmán feels a true sense of wonder at the bounty Chile offers. “We have an incredible amount of ingredients native to Chile, it’s crazy, it’s insane, really! Our geography is very particular, it’s narrow, it’s long, the Andes are so high and they get covered in snow. We have the Atacama Desert, and Patagonia in the south. There’s so much ocean, and it makes the perfect circumstances for different species.”

Guzmán has done nothing short of completely transforming the culinary identity of a nation, and in the process, he’s put Chile on the global gastronomic map. “Boragó has created a movement of gastronomic tourism for the first time in Chile, and it’s incredible. So we can’t think ‘Ok now we’re famous, let’s just keep it to ourselves and enjoy it.’ No, we have to share the knowledge, we have to pass it down to future generations.” In his book “Boragó, Coming from the South” Guzmán does just that, and in image after image the reader is constantly surprised as we follow the chef on his journey.

Before he got where he is today however, the chef and his enterprise struggled for years against the perception that Chilean ingredients just weren’t good, that his quest was not worthwhile. Chilean food writers didn’t like what he was doing, and they let everyone know it. The restaurant was empty, Rodolfo battled fears and uncertainty, even trying to sell the restaurant repeatedly, but nobody would buy it.

“I was scared. It was really tough,” recalled Guzmán with humility and honesty. “Just having an empty restaurant is the worst nightmare for a cook. I was so in trouble with myself. I was showing up every day for months and going straight to the reservation system. Then one day Diego who’s in charge of reservations said to me, ‘Ok Rodolfo, this is the last time. Go away, and don’t keep coming to check. I think you’re getting sick, it’s not good for you.’ And it wasn’t, and I realized it was like I’d been sick for six years.”

Eventually journalists from other countries started coming to Boragó. They loved it. They started writing about it. More journalists came, and finally in 2015 Boragó made The World’s 50 Best Restaurants list. “We went from an empty restaurant to being absolutely booked! It just exploded! And now, there’s not a single cook in Chile, even if they’re not Chilean, who doesn’t want to use the native ingredients. That’s an incredible feeling!”

Guzmán has also been working with the Mapuche to create an app documenting every indigenous ingredient in Chile. “It’s the first encyclopedia of native Chilean ingredients, and we’re even going to tell you how to get any ingredient into your own restaurant or market, because through this app we’re going to put you in touch with who can bring it to you. We’re creating a new economy with this. We’re saving knowledge for the future. We’re making Chileans proud of who we are and what we have.”

I asked Guzmán if the Mapuche foragers like what he’s doing at the restaurant, taking ingredients they know so well and doing such new things with them. He grinned, “Yes, big time! They love what we are doing! We’re taking tradition and moving it forward. That’s what you have to do, or the traditions will die. Eighty percent of Chileans have Mapuche blood, and that culture goes back 13,000 years. So at Boragó we really think our food is a continuation of that culture, it’s just our personal approach. As the Mapuche say, when something is being pulled from the ground, somebody else is cooking.”