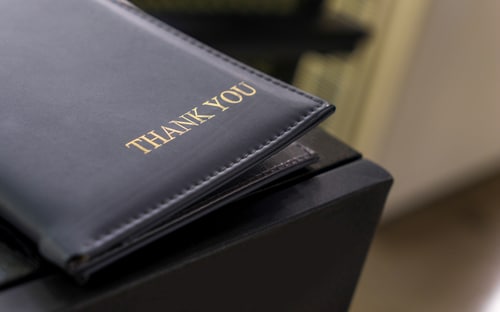 As a server working at a restaurant with a no-tipping policy, often when my customers sign off on their credit cards they ask, “Wait, where do I tip?” When I explain that our restaurant is gratuity free, I get several responses. Some people voice their support. Some say they want to tip and make sure I know that they would’ve. Some leave a few bills on the table and slip out before I can stop them. And many are simply left bewildered at the concept. When I explain that the servers are paid a higher hourly wage instead, they usually say, “That’s a good idea!”

It does seem like a good idea, at least preferable to getting paid less than minimum wage, but the process of going gratuity-free doesn’t come without growing pains.

Although I’ve been a server for seven years in restaurants ranging from local diners to fine dining establishments, I can’t say if I think going gratuity-free is the “right” thing to do. When paid less than minimum wage, I saw my tips as my income, and the wage was just a little bonus on my paychecks. Now my wage is my actual income, and the tips I do receive are the little bonus, a small token of appreciation for good service, not the public’s transferred duty to pay my bills.

At the same time, I understand why many servers aren’t on board for the change, especially in high-end establishments, where servers can see their annual income decrease by tens of thousands of dollars. Whether it works or not depends on an individual restaurant’s culture, and if they can pay their employees an adequate hourly wage, offer raises, frequent promotions or bonuses.

At Baldor Bite 2018 a panel discussion entitled “Progress in the Restaurant Industry: Culture and Employee Rights,” ended up being dominated by the topic of tipping. Moderated by Matt Duckor, executive producer of The Lifestyle Collection at Condé Nast, the panelists included restaurateur Andrew Tarlow, Gabriel Stulman founder and CEO of Happy Cooking Hospitality, and Erin Moran Chief Culture Officer of Union Square Hospitality Group, all of whom have tried or are trying their hand at gratuity-free restaurants.

They noted that benefits of going gratuity-free include fairer compensation between back of house and front of house, more control over scheduling for FOH staff, making promotions to management more financially viable, and making employees feel more secure. Andrew Tarlow, whose restaurants include Diner and Marlow & Sons, said some of his employees feel safer in a no-tipping environment.

This is why working at a gratuity-free restaurant works for me. Restaurants can’t expect to have steady business all the time, often due to factors out of their control like bad weather or a major sports game. As a server who has earned well over $100 and less than $10 per shift from the same workplace, I like the consistency and security of a decent hourly wage and can always work a couple extra shifts per week to earn a bigger paycheck.

What FOH staff make and what the restaurant makes tends to go hand in hand. As Tarlow put it, most restaurants spend around 30% of their revenue on back of house labor costs, and 20% of labor costs are supplemented by what’s left on the table for FOH. Tipping allows restaurants to think they’re running at a lower 30% labor cost, but it’s really 50%, because for every $1 the restaurant receives, 50 cents go to employees.

We’re in the business of taking care of our employees and making sure they are happy and well treated. That’s why it works for me, because that’s the business I want to be in. ~ Andrew Tarlow, Restauranter

However, there’s plenty of FOH workers who oppose the gratuity-free model, because for many of them, a higher hourly wage with no tips would mean taking a major pay cut. “We did lose a lot of really tenured employees and that was hard,” said Moran of USHG, which owns famous New York City institutions like Gramercy Tavern and Shake Shack. “They appreciated what they had; the shorter hours and they’d crush it financially.” This is the biggest hurdle when getting FOH employees on board with no tips, because as Moran put it, “the lows aren’t as low, but the peaks aren’t as high.”

The gratuity-free restaurant I work at has successfully kept this model for more than a year, and is also the most openly communicative work environment I’ve experienced. There, I feel comfortable speaking transparently to my bosses as they do the same for me. Moran reflected how I feel when explaining how this transparency is necessary for USHG to transition all their restaurants to be gratuity-free.

At first when we led with an attempt to convince people, that felt too cheerleader-y, or disconnected from reality. If you stay too long in the convincing space, it minimizes or marginalizes the fact that everyone has a choice. ~ Erin Moran, USHG Chief Culture Officer

They instead changed their messaging to educate employees on how the rules would change and that it may or may not work for them. “That empowered people to have a conversation that maybe they weren’t thinking they could have,” she said.

As individual restaurants experiment with new business models, we’re learning that what works for one server might not work for another, and what works for any server now might not work for them later. Gratuity-free works for me at the moment, but circumstances change. When my student loans kick in, for instance, and my monthly expenses climb much higher, I might have to give up the security of my hourly wage and risk those lower lows for higher highs again. Even if I do, I’ll always appreciate how working at a gratuity-free restaurant changed my mindset on tipping itself and how it’s helped me to question the way the industry is grappling with these changes.