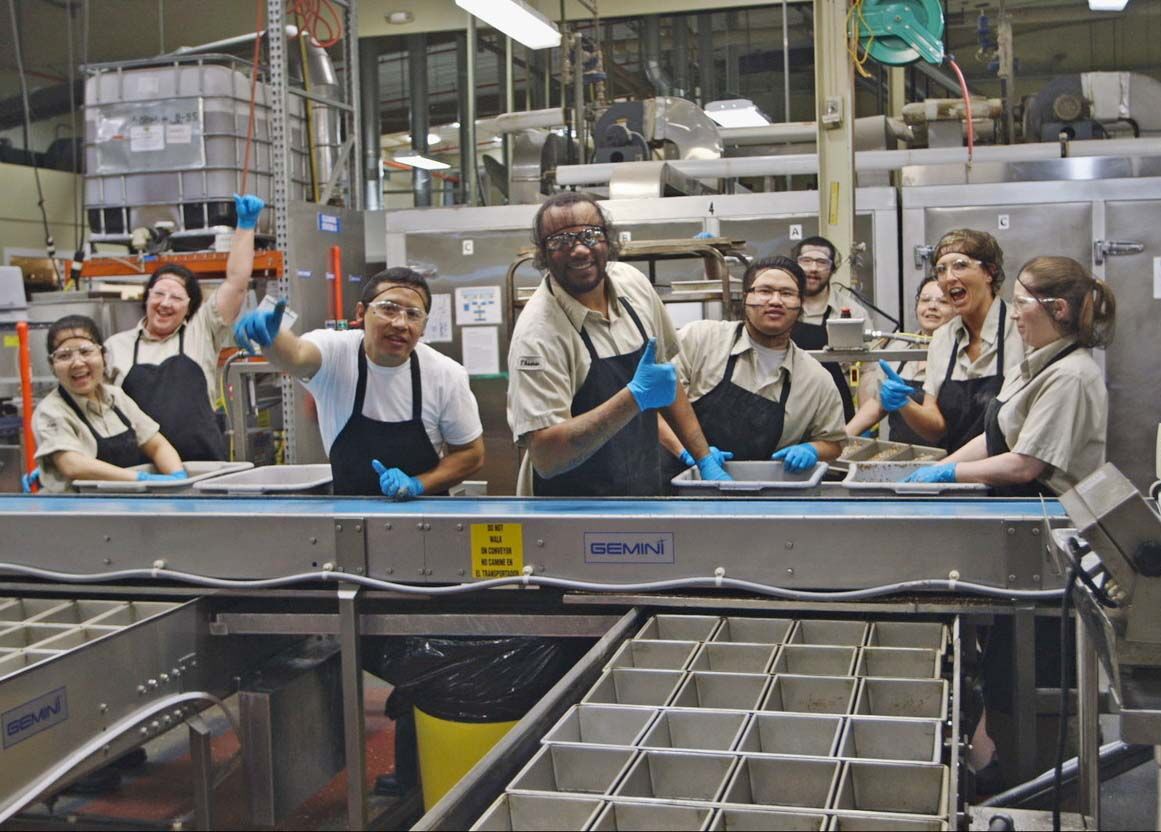 When it comes to giving the formerly incarcerated a second chance at a career after incarceration, the hospitality industry has been way ahead of the U.S. Government. As H.R.5682, The First Act Bill, enters deliberation in the Senate, having passed with bipartisan support in the House of Representatives, members of Congress would benefit from lessons learned in foodservice kitchens. Some socially responsible foodservice companies are offering formerly incarcerated people and other challenged job-seekers a fresh start, no questions asked… and bakeries are among the most welcoming.

In Oregon, Dave’s Killer Bread employs 300 bakers who produce 17 varieties of whole grain organic loaves. On the east coast in Yonkers, New York, the pioneering Greyston Bakery turns out 35,000 pounds of brownies a day, while San Francisco Bay Area-based Rubicon Bakers employs a hundred full time staff and bake products that are shipped to stores around the nation. These businesses vary widely in size and product, but their mission is the same: give people a second chance by giving them a job in a kitchen.

Greyston, a modern, chocolate-scented factory on the banks of the Hudson River in a low-income enclave just north of Manhattan, was founded in 1982 as a meditation retreat by Bernard Glassman, a New Yorker who embraced Buddhism. But when Glassman, who became a respected spiritual leader of the Zen movement, realized the need for jobs in the area, he changed focus and opened a bakery. During a chance meeting with Ben Cohen of Ben & Jerry’s Ice Cream at a conference, both men realized they shared the same ideas of what a business should be: making a good product, but also making a difference in the community. That encounter led to a long-term collaboration. Today all the brownies for Ben and Jerry’s iconic Chocolate Fudge Brownie flavor are made at Greyston by 80 bakers, working day and night shifts.

There are no job interviews at Greyston, where an Open Hiring model offers work to anyone who applies – not only those formerly incarcerated, but others with histories of homelessness, substance abuse, domestic violence and illiteracy. However, because the need is so great, there is often a long wait list. Once hired, employees undergo a six to twelve month training program, learning all phases of the operation, from measuring out fair trade butter, sugar, Belgian chocolate and cage-free eggs, to preparing the batter, baking sheets of dough, and manning the machines that chop brownies into bite-sized pieces.

Not everyone makes the grade, but those that do discover a compassionate and empathetic workplace. However, even non-employees benefit from Greyston through its foundation which addresses local needs. There is a community center for daycare, educational programs and job training, and ten community gardens in an area that is considered a food desert.

While Glassman’s philosophy still prevails at Greyston, the bakery, currently helmed by CEO Mike Brady, is seeking to expand its mission in order to hire more employees by establishing new markets for consumer sales and food service contracts with airlines and hotels. Since 2012 Greyston has been making four flavors of brownies for sale at Whole Foods and last year the company supplied mini-brownies to Delta Airlines for overseas flights.

Rubicon Bakers, located in the San Francisco Bay Area, which surprisingly has a high unemplyment rate, was founded as a non-profit social enterprise in 1993 by Rubicon Programs to provide job training skills. But when Rubicon Programs decided to focus on providing social services eight years ago, they determined to sell the bakery, which had been losing money, and had dwindled to only 14 part-time employees.

Rubicon Programs asked financial consultant/restaurateur Andrew Stoloff to handle the sale, but when he was unable to find a suitable buyer, Stoloff bought it himself. Committed to retaining the same second chance mission, but switching from a non-profit to a for-profit business. The company’s revenue has since grown by 400 percent, with 100 full-time staff enjoying health benefits, paid vacation, sick leave, and a unique interest-free employee loan program. Last year Rubicon changed its name from Rubicon Bakery to Rubicon Bakers to shift the emphasis to the actual bakers, who are the heart and souls of the business, adopting a new tagline to reflect their social mission: Bake a Better World. While visionary social entrepreneurs like Glassman and Stoloff began with the goal of giving people a second chance, in other cases, personal travails can provide the impetus for positive change in a business. That was the case with Dave’s Killer Bread in Milwaukie, Oregon, where 300 employee-partners, a third with criminal records, ship 17 varieties of USDA Organic and Non-GMO Project Verified breads to retail and wholesale outlets nationwide. In 2005 co-founder and namesake David Dahl returned home after 15 years in prison and was given a second chance when his older brother Glenn welcomed him back to the family bakery. With his family’s support, Dave developed a super bread using a variety of seeds and grains. First sold at the Portland Farmers Market in 2005, the bread was an instant success, and the beginning of a burgeoning bread empire. Sold to baking giant Flowers Foods in 2015 for $275 million cash as an independent subsidiary, its social mission remains intact. That same year, expanding the advocacy for second chance employment beyond bakery walls, DKB established the Dave’s Killer Bread Foundation, a non-profit offering programs like Second Chance Summits, informational sessions held in different cities for representatives of businesses, non-profits, and governmental agencies. Increasingly, large and small enterprises in the hospitality industry are opting for a second chance workplace, and the First Act Bill has some provisions in assisting businesses to achieve this goal, so now is the ideal time for hiring professionals in the foodservice industry to become a part of the super-charged discussions currently happening on Capitol Hill.  While I can’t mention them all here, there are thousands of examples across America of bakeries and restaurants giving the challenged workforce a second chance. As they put it at Greyston, “We don’t hire people to bake brownies. We bake brownies to hire people.”