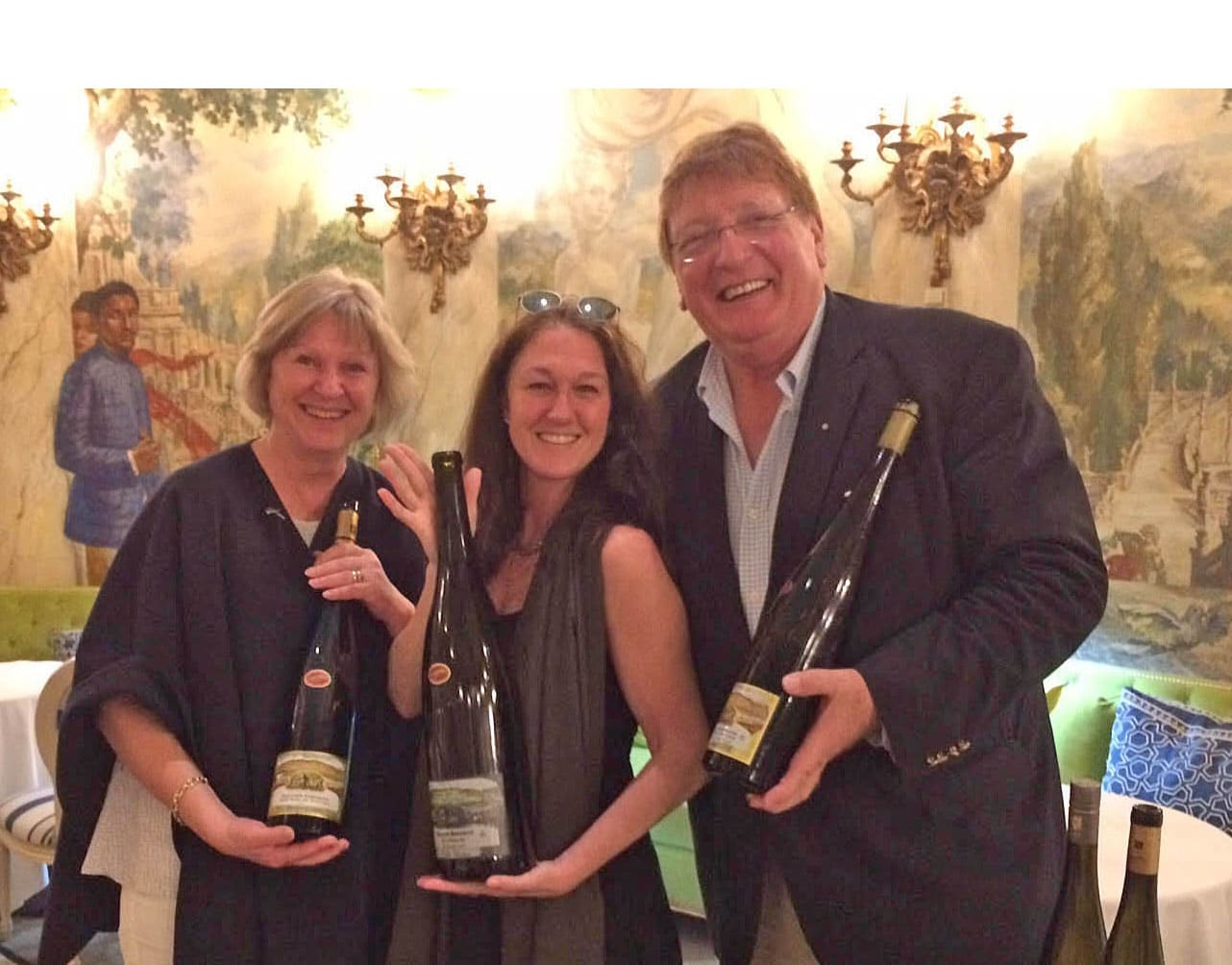 What could be better than acquiring a rare vintage Riesling from a winemaker whose family-run Mosel vineyard dates back to 1156?  Knowing that every penny of the hand-blown glass bottle of golden, liquid glory goes to a carefully chosen charity.

S.A. Prüm began auctioning off its collection of 1911 Wehlener Hammerstein and donating 100% of the sale to the German Breast Cancer Association, a decision taken by Raimund Prüm, when he was pondering what to do with this rare collection.  “My mother and my wife Pirjo both had breast cancer,” Raimund shared with me over lunch and a Prüm wine tasting at The Pierre Hotel during his visit to New York City. “So I decided I had to do something more to support them.”

Raimund didn’t just rush to donate to a big-name charity however, he took a close look at where he would donate the funds raised by the auction.  “We inspected a lot of charities, and of course we read about the Susan G Komen Foundation and that they have $420 million.  But we couldn’t really find out if all of that money was actually going for breast cancer.  Initially I had wanted to donate there, but then I thought about it and said No.”

Explaining his reasoning behind this choice, Raimund continued, “I donate a lot of money to social organizations, but it’s very important that the money goes directly to the people who need help.  I look at the U.S., a country that is huge on giving to charity, but always we have the question, Does the money go to the right place, to the people who need it?  For example, I would never give to The Red Cross because they spend more money on things that don’t actually reach or help the people in need.”

Raimund is right to be concerned.  After our discussion, I turned to one of my partners here at CulEpi, Betty Winnacker, who does bookkeeping and tax filings for 501(c)(3) non-profit organizations, to see if she had any advice for potential donors who share Prüm’s apprehension, and she recommends looking into a charity’s tax filings before becoming a grantor or donor.  She explained, “the best way to track the money trail of a charity is to look up an organization’s Form-990.  Form-990 is often the only way to track a charity’s financials, and is often used by the IRS to determine if a charity is abusing its tax-exempt status.” Betty recommends visiting the website Guidestar and looking up the charity you’re considering donating to, before you whip out your credit card.

Because accountability and impact are foremost for his charity choices, Raimund and “others who were searching for a better way to donate” founded a Lion’s Club in Mosel, in the living room of his home, over some bottles of Riesling.  “Others in my region also give a lot to charity, and share my concern about where does the money actually go with some of these big charities out there,” said Raimund of their collective desire to donate differently. As a result, the Mosel-based Lion’s Club meets regularly to discuss current needs in Germany and beyond, and to share ideas about the best ways their donations can have a high – and sometimes immediate – impact.

Beyond the auctions of their 1911 Wehlener Hammerstein, Raimund Prüm, his wife Pirjo and daughter Saskia – who now heads S.A. Prüm – continuously give to carefully chosen charities with a high impact and low overhead.  Raimund hopes their example will encourage others not only to give, but to give wisely.  “We’re always looking for the best, most transparent ways we can spontaneously help in the moment that people need help, and we’re always looking for more people to join us.”